FM to lead Indian CEOs at US meet

Finance Minister Pranab Mukherjee will lead a high-level business delegation, including Ratan Tata and Mukesh Ambani, to the US next week, where he will also have a bilateral meeting with his American counterpart. 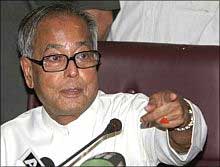 "During his stay the finance minister will also have bilateral meeting with his US counterpart," an official statement said on Friday.

This will be the second meeting of the reconstituted India-US Business CEOs Forum, the statement said.

What Ratan Tata wants from GenNext