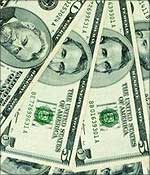 Foreign direct investment in India grew by 15.4 per cent to $1.72 billion in February compared to the same month last year, an official said on Wednesday.

During April-February period of 2009-10 the inflows declined to $24.68 billion, from $25.39 billion in the same period last year, under the impact of global financial crisis.

Source: PTI© Copyright 2021 PTI. All rights reserved. Republication or redistribution of PTI content, including by framing or similar means, is expressly prohibited without the prior written consent.
Related News: FDI, India
Print this article