The tangled chargers could soon be a thing of past, as Japanese scientists have developed a system that would allow you recharge your mobile phones and laptops wirelessly. 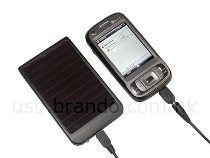 Developed by Japanese technology firm Fujitsu, the system is capable of simultaneously charging multiple portable electronic devices such as mobile phones, digital cameras and laptop computers without the need for cable connections.

According to the company, electric cars users may also eventually be able to charge their vehicles wirelessly using the same system that will be available by 2012.

Fujitsu has recently unveiled a prototype system at an Institute of Electronics, Information and Communication Engineers conference at Osaka Prefecture University.

"This technology paves the way to integrating compact wireless charging functions into mobile phones and enabling multiple portable devices to be charged simultaneously without any restrictions on their position with respect to the charger," the company said in a statement.

Claiming to be the world's first of its kind, the technology works on the basis of the transmission of electricity using magnetic fields between the charger and the electronic device.

The system enables wireless charging at distances of up to several metres, with the ultimate aim of installing public "charging spots" on the streets in order to enable easy charging around the clock, the Telegraph reported.

Scientists at Fujitsu Laboratories are planning to commercially sell products incorporating the new wireless charging system as early as 2012 but did not disclose how much they would cost.

The company hopes that the soaring popularity of portable electronic devices ranging from iPads to e-readers is expected to fuel a boom in wireless recharging technology developments over the coming decade.

Mobile phone users in Japan can currently top up their batteries using disposable portable plug-in battery-operated devices available at most train stations and convenience stores although phone companies warn prolonged use can damage the phones.

The new system by Fujitsu, however, is significantly more sophisticated and represents the next generation of portable recharging systems using highly tuned wireless technology.

The company added: "We are also looking at applying the results of this work to fields other than portable electronics, including power transmission between circuit boards or computer chips, and providing mobile charging systems for electric cars."