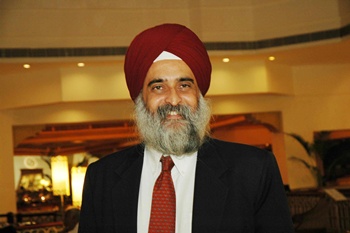 It will take many decades for India to become a giant economy, primarily because of its population size, but we can grow very rapidly and become a developed nation once we change our economic policies, says Dr Nirvikar Singh in an interview with rediff.com.

Singh is Professor of Economics and Co-Director of the Center for Global, International and Regional Studies at the University of California, Santa Cruz. He currently holds the title of Special Advisor to the Chancellor at UCSC, and has taken the lead role in developing a new graduate management school in Silicon Valley. He is also a co-founder and Director of the Santa Cruz Center for International Economics.

Singh holds a PhD from the University of California, Berkeley. He received his BSc and MSc from the London School of Economics, where he was awarded the Allyn Young Prize, Gonner Prize and Ely Devons Prize.

He was in Chennai to address the students of the Madras School of Economics on the topic: 'Rediscovering India: From Wounded Civilization to Emerging Giants.'

In his interview with rediff.com he discussed rediscovering India, the country's progress so far and the global economy in general.

Your lecture at the Madras School of Economics was on 'rediscovering India'. Do we have to rediscover India? Why now?

It is my personal perspective and I am playing off Jawaharlal Nehru's discovery of India. I am talking about an intellectual and physical rediscovery.

I live abroad and every time I come back to India, I rediscover the country. As a child, I had a particular view of India and reacted to things around in a particular way. As a professional economist, I have a different view and way to look at things. That is why I used the term, 'wounded civilisation'.

By rediscovering, I also mean a different analytical framework to understand what is going on in India. That is where someone like V S Naipual -- the British novelist and essayist of Indo-Trinidadian descent -- completely fails.

'Once we change economic policies, things will change' 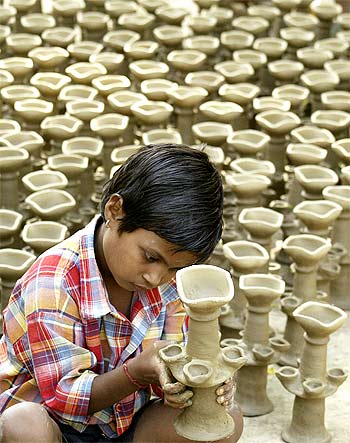 Image: An artisan makes earthen lamps at a workshop ahead of the Hindu festival of Diwali in Amritsar.
Photographs: Munish Sharma/Reuters

Why do you say, wounded civilisation?

I use that term to highlight the '60s and the '70s when a lot of people wrote India off and said the nation could never become developed. They said the country cannot grow at more than 3.5 per cent a year.

I want to emphasise that this is wrong. Once we change the economic policies, things will change. Growth has nothing to do with culture or history or geography -- these things matter very little. However, perceptions and policies matter. We need to perceive that India can grow very rapidly and that we can be a developed nation.

Is India really an emerging giant?

Again, it is a catch phrase. It will take many decades for India to be a giant simply because of its population size.

Both India and China will emerge as giant economies but it will take time. If you can bring a significant portion of the poor of India and China out of poverty to decent standards of living, it will completely transform the world, as the two nations together make a third of the population.

Do you call the Indian economy a success story? The divide between the haves and have-nots has widened in the last decade. We see Naxalism and Maoism everywhere.

We are not a giant yet but we have the potential to be one. These are the challenges.

I think there has been some improvement in the quality of life in India. Yes, there are issues about the distribution of the turn-out of growth, but at the 8-10 per cent mark, there will be more room to manoeuvre.

The fact that India can fund operations such as the National Rural Employment Guarantee Schemes and National Health Mission shows that we are growing 8-9 per cent a year.

What is more striking is when the growth was sluggish -- at around 6.5 per cent -- it was termed as slowing down. I remember in the mid-90s, debating with Leftist economists who said that India would never reach 7 per cent growth mark! I think rapid growth is the fundamental condition to do anything.

At the second level, we need is policies that can enable us to benefit from the fruits of that growth.

'We will take decades to reach Western standards of living' 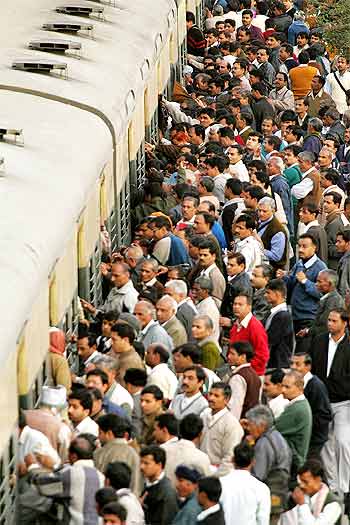 Image: Indian commuters board a crowded train in New Delhi.
Photographs: B Mathur/Reuters
As an economist, how do you look at the discontentment of the majority of the population when the country is growing at 8-9 per cent?

I don't think there is a discontent among the majority. Most Indians have an urge to be better off, and that reflects from the level of material progress and improvement in the standard of living they have achieved compared with the plane at which it was about 20 years ago.

However, inequality is an issue and we need to provide basic education and health to everybody. It will be much easier to overcome these issues at a 10 per cent growth rate.

How important is material progress for people, the country and its economy?

It is very important. It is not just about status it is about the way you live. If you have electricity and a refrigerator in your house, you can store milk and food.

So, material progress is not just about conspicuous consumption; it is about things that make fundamental difference in the lives of ordinary people. We should not devalue that. I would like to see every Indian living a better life, like those who live in developed countries.

How long do you think it will take for India to reach that level?

With 10 per cent growth, it may take a few decades, which is not that bad, considering the time it took us to fall behind the West. If you look at the 1400s, India and China had the standard of living similar to the West. Now, India's per capita income and purchasing power parity is, maybe 15th of that of the United States.

If we can catch up in 100 years what took us 500 years to fall behind, that is pretty fast. We have to be patient but rapid growth is essential.

'India, China can completely recover by 2011' 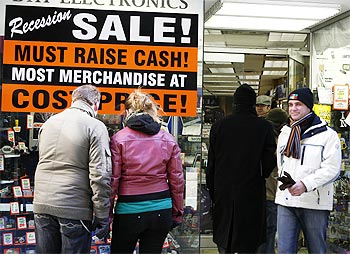 You live in the United States. It is reported that there is recession over there. What is the mood of the people there?

People have now realised that the world is not coming to an end.

It is like having a hangover after a party and the US is in a hangover mode. It will take time for them to come out because they are too much in debt.

After the recession, which countries will emerge stronger? In what way will the power equations change?

I don't think recession will change the trends. The trends are that India, China and other emerging market economies like Brazil have reached a point where they can sustain growth.

But being part of the global economy is very important. As countries attain a certain standard of living, things will become easier for the rest of the world.

Forty years ago, the way to grow was export to the US and Europe. Now, you can export to middle income countries.

When will we see more action in the global economy?

I see no reason why India and China cannot completely recover by 2011. The US may take another year or so.
More
Print this
article