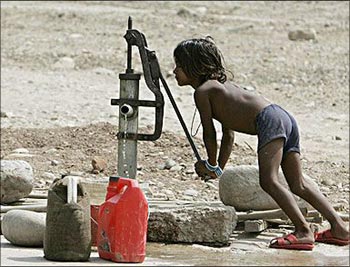 If you are afraid because your tap has been running dry lately, then it is time you braced yourself for worse times to follow. Terrifying times, in fact.

By the year 2020, says a recent World Bank report, most major Indian cities will run dry. Given the state of the monsoon this year, it would appear that the World Bank report has come true almost a decade earlier.

India's supply of water too is rapidly dwindling primarily due to mismanagement of water resources, although over-pumping and pollution are also significant contributors.

However, we are not still ready to accept the reality of depleting groundwater reserves in India. This condition has caused a major water crisis.

Click NEXT to know more about this frightening issue. . .

With inputs from Agencies 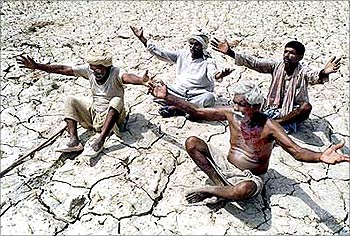 Image: Farmers pray for rain as they sit on a dry paddy farm in Allahabad in Uttar Pradesh.
Photographs: Reuters 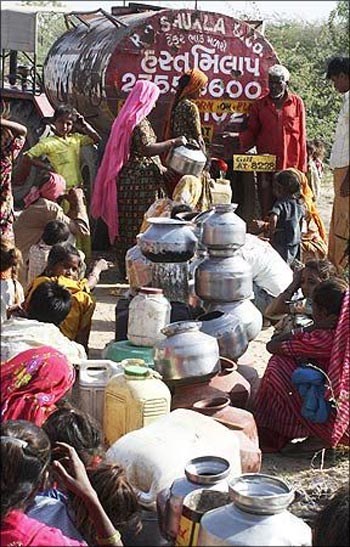 Image: People crowd around a water-tanker in Ahmedabad.
Photographs: Reuters 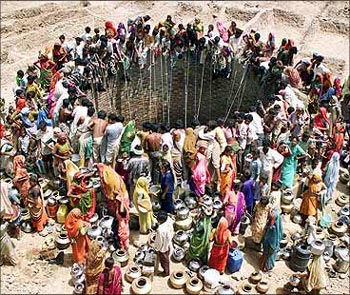 In an unprecedented incident, a 30-year-old man, who was part of a 1,000-strong group protesting against the stringent water cut outside the Bombay Municipal Corporation headquarters recently, died of apparent cardiac failure during a police lathicharge.

Viral Dholakia, who died before he could be taken to GT Hospital a few metres away, was a founder member of Swabhimaan, an NGO set up by Narayan Rane's son, Nitesh, who was also leading the protest.

Incidents like these, however weird they may seem now, are bound to get repeated unless we sit up and take some drastic steps to counter water crisis, which is sure to assume alarming proportions in years to come

With climate change set to have unpredictable consequences on water regime, the action plan, he said, aims at increasing water use efficiency by 20 per cent and promote basin level integrated water resources management.

Noting that efficient use of crop water can increase the gross irrigated area either by increasing the irrigated cropped area or the irrigation intensity, the prime minister said that the second green revolution could come from technologies developed in the private sector.

"Water related issues need to be addressed with full involvement of local people and taking into account the local conditions. Farmers should be consulted in any agricultural water management initiatives.

"Women too play a key role in food production activities in many countries. A special effort should be made to involve them in decision making," he said. 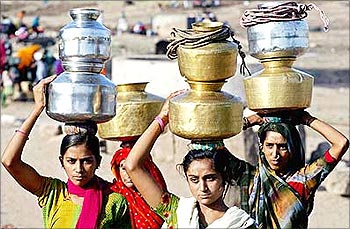 Image: Residents of a colony in New Delhi leave after filling their containers from a water tanker.
Photographs: Adnan Abidi/Reuters

This crisis is not just the disturbance in the demand and supply curve but is also about mismanagement of water resources.

India's water crisis is a man-made problem. One of the major problems is water pollution.

New Delhi alone produces 3.6 million cubic meters of sewage every day, but because of poor managementm less than half is effectively treated. The remaining untreated waste is dumped into the Yamuna River. Thus a combination of sewage disposal, industrial effluents, and chemicals from farm runoffs, arsenic and fluoride has rendered India's rivers unfit for drinking, irrigation, and even industrial purposes.

Also, the over-usage of ground water due to the unavailability of sufficient water for irrigation has led to a tremendous decrease in the level of ground water.

Also, because of global warming, rainfalls have become erratic and unpredictable because of which the agricultural sector has been affected seriously.

We need to take rational steps to manage water in India before it becomes an international crisis, as this will affect the nation's economy and will also lead to various water-borne diseases.

The reasons for this extreme drop rate lie mainly in the use of groundwater for irrigation, according to B M Jha, chairman of the Indian Central Ground Water Board.

The Central Ground Water Board is the apex national organisation, working under the ministry of water resources and is responsible for various activities related to exploration, development and management of groundwater resources in the country.

In the wake of the Green Revolution, irrigation of cropland in India has taken on a new dimension.

As the major reasons for the drop in the water table in the north-western part of the country, Jha cites the accompanying gradual change in the cropping pattern from wheat to paddy-grown rice, the latter being a more water intensive crop, as well as the free power or the flat power tariff for running the irrigation pump rigs. 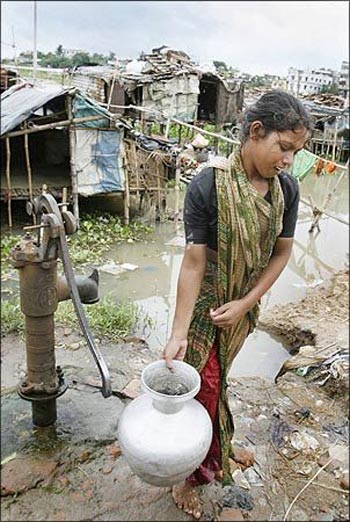 How grave is the crisis?

In India, the groundwater table in some regions is dropping dramatically. A team of researchers led by Matthew Rodell of the Hydrological Sciences Branch of NASA recently measured just how severe the situation is for the states of Rajasthan, Punjab and Haryana (including Delhi).

The results were published in August 2009, in the online edition of the science magazine Nature.

According to these results, the water table in these regions is dropping by 17.7 + 4.5 cubic kilometres annually. During the August 2002-October 2008 study period, the groundwater loss was 109 cubic kilometres.

This corresponds to twice the volume of India's largest surface water reservoir. 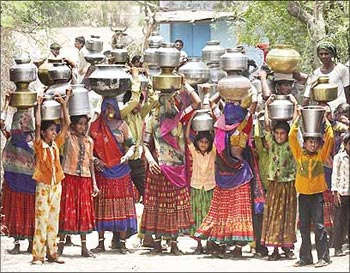 India is expected to experience a severe water crisis by 2020 with the per capita availability of water projected to be less than 1,000 cubic metres.

Indian water scenario was a matter of grave concern, as 85 per cent of water was used for agriculture, 10 per cent for industry and five per cent for domestic use, according to a paper presented at a national symposium in Coimbatore, Tamil Nadu.

Being a developing nation with a large population on the negative side of the poverty line, economic water scarcity (limited access to fresh water because of lower affordability) assumed equal, if not, greater importance as that of physical water scarcity, it said.

Quoting a World Bank study, it said of the 27 Asian cities with population of over 10 lakh (1 million), Chennai and Delhi were ranked as the worst performing metropolitan cities in terms of water availability per day, while Mumbai was ranked as second worst performer, and Kolkata the fourth worst.

The row between Karnataka and Tamil Nadu over river Cauvery waters, between Maharashtra and Karnataka over river Godavari, and between Madhya Pradesh and Gujarat over the Narmada waters are some of the confilcts, the paper said.

The conflicts are being bitterly fought at all levels, imposing very high economic environmental costs.

Climate change projections showed India's water problems were only likely to worsen and with more rain expected to fall in fewer days and the rapid melting of glaciers, especially in the western Himalayas, India would need to gear up to tackle increasing incidence of droughts and floods, the paper said.

Global fresh water supplies were continuously stressed by rising demands from growing population and its ever increasing needs for hygiene, sanitation, food and industrial needs.

While the world's population tripled in the 20th century, the use of renewable water resources has grown six-fold and within next 50 years, the world population would increase by another 40 to 50 per cent, it claimed.

On water facts, the paper said that a billion people in the world do not have access to safe water, which was roughly one sixth of the world's population.

About 1.8 million people died every year as a result of diseases caused by unclean water and poor sanitation, which amounted to around 5,000 deaths a day.

The simple act of washing hands with soap and water can reduce diarrhoeal cases by over 40 per cent, since water-related disease was the second biggest killer of children worldwide, after acute respiratory infections like tuberculosis, it said. 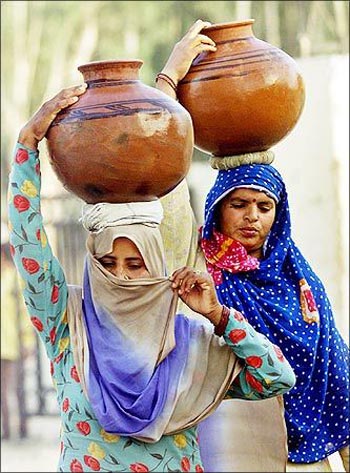 Water crisis is sure to lead to a sharp decline in agricultural production, which will negate all of the previous efforts at food security.

India will become a net importer of grain, which will have a huge effect on global food prices, as well as the global supply of food. A rise in food prices will aggravate poverty because people will have to spend larger portions of their income on food.

In addition to devastating the agricultural sector of India's economy, the water crisis will have a big effect on India's industrial sector, possibly stagnating many industries.

India has the power to avoid this dark future if people take action immediately: start conserving water, begin to harvest rainwater, treat human, agricultural, and industrial waste effectively, and regulate how much water can be drawn out of the ground. 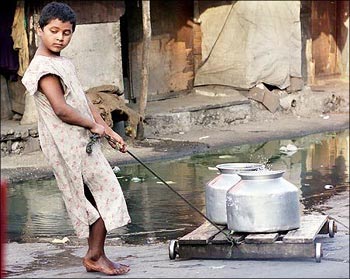 Image: A child pulls a cart with water-filled bowls in it.
Photographs: Reuters

According to the chairman of the Indian Central Ground Water Board, the Indian government has taken various steps to get the groundwater problem under control.

Other important points are capacity building, an awareness campaign on rainwater harvesting and conservation of water resources and regulation of groundwater development in selected areas of the country.

Along with the central government, the state governments are also actively involved in the fight against the dropping water table.

They are offering stimuli to grow crops that require less water, they are placing restrictions on financial institutions providing loans for procurement of submersible pump rigs, and they are trying to stagger the sowing season in such a way as to reduce the peak water demand.