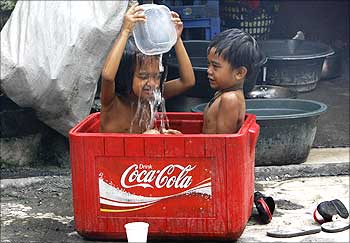 Hitting hard at global warming sceptics, powerful United States lawmakers have accused them of 'engaging in a policy of distraction' by promoting hacked e-mails which claimed that scientists had exaggerated the crisis and asserted that the world is getting hotter faster.

Meanwhile, the British Met Office has predicted that the year 2010 is likely to be the world's warmest on record.

According to the met office, man-made climate change will be a factor and natural weather patterns would contribute less to 2010's temperature than they did in 1998, the current warmest year in the 160-year record. 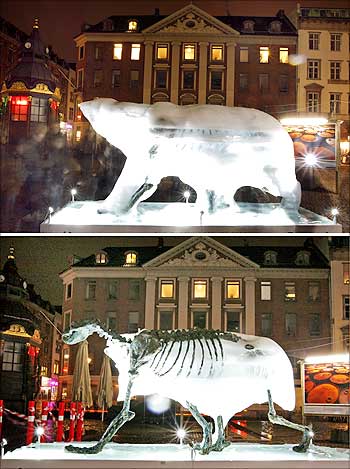 Image: A combination photograph shows an ice sculpture of a polar bear as it melts to reveal a bronze skeleton in Copenhagen. The first picture (top) was taken on Dec 7, the day of the beginning of the UN Climate Change Conference in Copenhagen. The installation is a part of an initiative to put focus on the consequences of global warming.
Photographs: Pawel Kopczynski/Christian Charisius/Reuters

Ben Stewart of Greenpeace said: "If 2010 turns out to be the hottest year on record, it might go some way towards exploding the myth, spread by the climate conspiracy theorists that we're experiencing global cooling. In reality the world is getting possibly a lot hotter, and humans are causing it."

But, the Global Warming Policy Foundation, has accused the met office of making a 'political intervention' in the international negotiations taking place in Copenhagen.

Meanwhile, three lawmakers from the House Select Committee on Energy Independence and Global Warming stated this in a news conference organised in response to controversy over hackers gaining access to documents of the climate research centre of the UK-based East Anglia University and leaking confidential data, including thousands of e-mails, between scientists in the United Kingdom and the United States over the past 10 years. 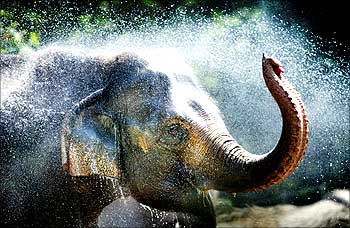 Image: An elephant at Rotterdam Zoo splashes water over itself during the hot weather with temperatures rising in Rotterdam.
Photographs: Guido Benschop/Reuters

Reacting to the scandal, known as 'climate gate' which led to accusations that researchers had exaggerated the crisis, the powerful Congressmen said the e-mails do nothing to refute the overwhelming evidence that humans are causing global warming.

"Global-warming deniers are trying to say this is all a trick. But the truth of the matter is that our world is getting hotter faster. New temperature findings by the National Oceanic and Atmospheric Administration have found that 2009 is on track to be the fifth-warmest year on record, and that this decade is already the warmest decade on record," said Congressman Edward Markey, chairman of the Select Panel.

"These new findings buttress the overwhelming scientific record that global warming is real and it is accelerating. Even if the tree-ring data set in question is ignored, the stolen e-mails do not alter the multiple lines of independent scientific evidence for human-caused global warming," Markey asserted. 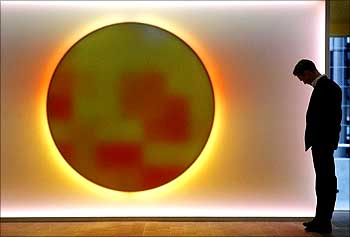 Image: A Danish policeman stands next to an art installation located near the exit of the Bella Center in Copenhagen.
Photographs: Bob Strong/Reuters

"In fact, the National Academy of Sciences confirms the findings that 20th century warmth in the northern hemisphere was unprecedented during at least the last 1,000 years."

Markey alleged that it is coalition of paid-for deniers that is trying to distract way from the central set of actions, which the US should be taking to create a clean-job revolution in the country.

"That's what their agenda is all about. That's what this fight is about. And we don't expect this to be an easy fight, because it's the same coalition that we saw in the past on tobacco and other issues," he said. 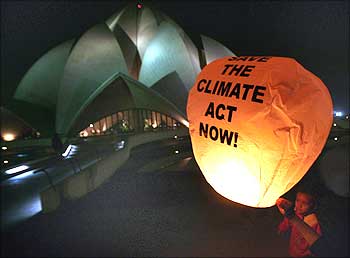 Image: A sky lantern floats in front of the Bahai Mashriqu'l-Adhkar, or the Lotus Temple, during an environment awareness programme in New Delhi.
Photographs: Rupak De Chowdhuri/Reuters

Since 2001, all the years have been in the top 10 hottest years on record. This decade is the hottest on record, beating out the 1990s by a substantial margin, he said.

"We go to Copenhagen with the challenge of actually not only reassuring people who are concerned about the United States' commitment, notwithstanding what the administration has done, but then we have to counter some of our own colleagues, who should be concerned about the energy waste and the problems that face the planet. . .," said Congressman Earl Blumenauer.

Markey, Blumenauer and the third lawmaker, Jay Inslee, accused the global warming sceptics of engaging in a policy of distraction by promoting the hacked e-mails.