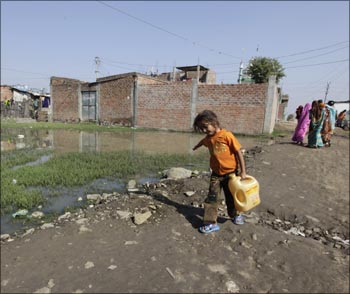 This is the first in a Business Standard series on water woes faced by the country's biggest cities and the lack of strategy to deal with the crisis that bothers every household.

This week the BrihanMumbai Municipal Corporation (BMC) will decide if Mumbaikars, who are already coping with 15 per cent reduction in water supply, have to go without water once a week.

Water scarcity, made more acute this year due to deficient rain, is not a problem specific to the country's financial capital. Growth appears to have come to many cities at the expense of water, as expansion has turned their taps dry, rivers dirty and got expenses skyrocketing. Local administration in these cities are yet to find a way to deal with their changed water needs.

Of the seven cities covered by this Business Standard series -- Delhi, Bhopal, Chandigarh, Kolkata, Mumbai, Bangalore and Chennai -- only Bangalore is taking its water seriously enough to tap rain water and meter every drop, while the Capital is content blaming migrants for its woes at the same time winking at rampant wastage of ground and river water.

Chennai is zero-metered, while Mumbai is yet to set up its desalination plants or take rain water harvesting seriously. 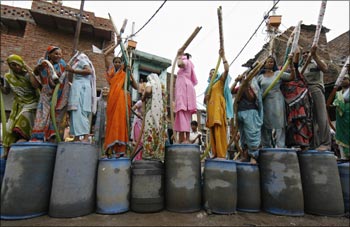 Lack of transparency is acute in all the cities, except Bangalore, as little is possible to be known without volumetric metering of water usage.

Most cities complain of existing water sources like lakes and rivers drying up, and all, except Bangalore, Delhi and Chandigarh, lack meters.

Bangalore alone claims that 90 per cent of its meters are functioning, while in the national capital almost half the water supplied is yet to be accounted for.

BMC officials say the municipal body has stepped up its efforts to check wastage and pilferage, the two combined responsible for at least 20 per cent loss, but the efforts are yet to be visible on the ground level.

Nowhere is ground water being treasured as a source, though it fulfills much of the cities' needs. Misuse of water is rampant, but it does not attract any penalties anywhere, except in drought-hit Indore, where a water emergency is on this year. 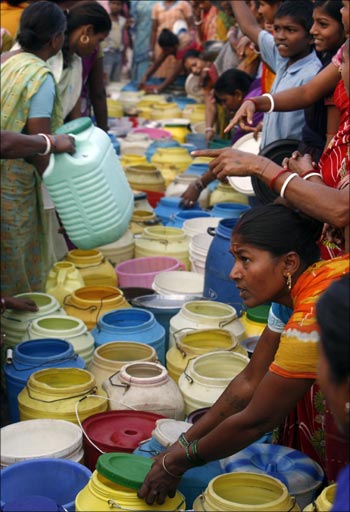 Chandigarh is another which has offered incentives to those using treated sewage water for gardening and non-drinking purposes.

In Kolkata, there is a problem of plenty. The city's water department takes the river Hooghly for granted and is yet to install meters.

In Bhopal, like Kolkata, meters are for another age and time, which rules out charges for the usage or checking misuse.

The city lives off the Upper Lake, which ran dry last summer -- a warning that forced the government to wake up. Still, it eagerly awaits a project that will bring water from the Narmada. 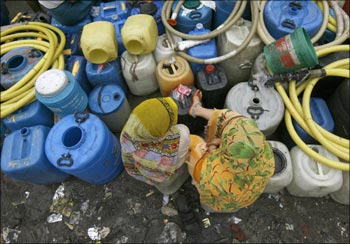 In IT capital Bangalore, water is served in electronically metered litres and now it has begun talking of a parallel pipeline to supply rain water to meet the demands of the fast expanding city.

A World Bank report, which along with the Urban Development Ministry did a benchmark study of 10 cities, found no link between consumption and charges payable by the consumer in most of the cities, barring Hyderabad and Bangalore. Out of the 10 cities, the World Bank found only three financially viable.

The multilateral agency suggested benchmarking or measurement of performance of each supply system on certain key parameters, to enable efficiency or at least a movement toward it. The study was conducted three years ago.

But till date, not much has changed as far as data collection is concerned. If implemented, this alone could lead to further steps to curb misuse and increase production through other sources like rain water harvesting and protecting existing resources.