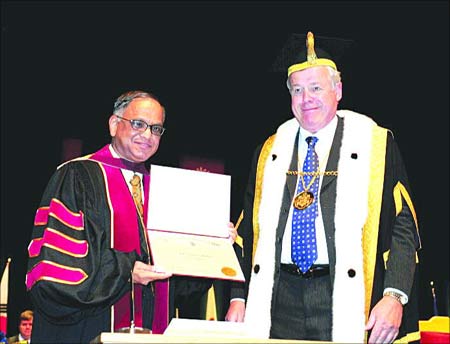 The award citation was read out by Sudhir Mudur of the university's engineering and computer science department, and Judith Woodsworth, president and vice chancellor, Concordia University, conferred the degree on Murthy along with Chancellor David P O'Brien.

Infosys is the India's third largest software company, with 100,000 employees in 90 countries.

'The importance of N R Narayana Murthy's contributions to the field of software engineering cannot be underestimated,' the citation said. 'His innovations have reshaped the IT landscape in his native India and around the world.'

'Murthy stays true to his simple living, high thinking philosophy,' the citation continued. 'He has a reputation for being self-effacing and acting like a father figure to his employees. Murthy leads by example and remains grounded; he's a role model for aspiring technology and business leaders, for Concordia students, and for us all.'

The citation also was pointed out how Murthy 'joined the ranks of Mother Teresa, Mahatma Gandhi, and the Dalai Lama as one of Time magazine's Asian heroes for bringing about revolutionary change in Asia over the last 60 years.' 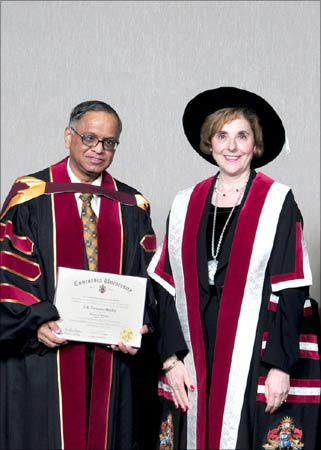 In his acceptance speech, Murthy emphasised what leadership qualities in true professionals should be.

Throughout his speech, he used a single gender, she, because, to denote both genders, because, he said, 'It is time we recognise that women are as representative of engineering profession as men.'

He told the computer science and engineering graduating class that the honorary degree conferred upon him was 'an affirmation of the extraordinary friendship between Canada and India.'

Infosys, Murthy explained, works on the principles of globalization, which he defined as 'outsourcing capital from where it is cheapest, sourcing talent from where it is best available, producing where it is most cost effective and selling where the markets are -- without being constrained by national boundaries.'

He defined what leadership qualities denote in Infosys: 'She trusts her colleagues and has faith in them. She starts every transaction on a zero base and does not carry any bias from prior transactions to the current one. She makes objective decisions based on analysis of data. When necessary she will disagree with her colleagues since she believes in the adage, you can disagree with me as long as you are not disagreeable.'

In a world where corporations have started operating in several countries, he said, "Professionals have to learn to deal with other cultures fairly, courteously, and confidently." A true team leader, he said, 'praises her team members in public and criticizes them in private.'

He concluded with words of advice to students: 'Choose a dream worthy of yourself. Go after it confidently. Lead a life of adventure, joy, purpose, sacrifice and fulfillment. But always be a true professional.' 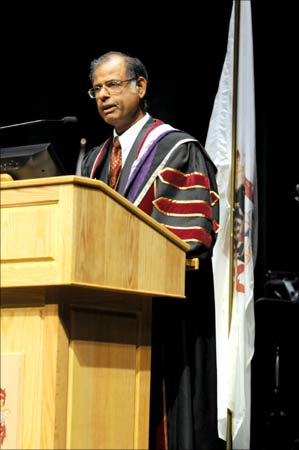 "Sometimes," Vice Chancellor Woodworth later told rediff.com, "recipients of honorary degrees are very impressive because of what they have achieved but they don't necessarily communicate their success to students [very well]. But Murthy communicated that very well."

In a conversation with rediff.com, Judith Woodsworth, president and vice chancellor, Concordia University, described N R Narayana Murthy as a person of "extraordinary caliber" who is "very humble and generous."

Dr Rama Bhatt, vice provost, Concordia, explained how the university chose the Infosys founder as the recipient of an honorary doctorate degree.

"After all," Bhatt said, "he is the patriarch in India in the information technology area. Honoring him and claiming him as one of our own would ensure Concordia's presence in the Indian IT scene."

The students were extremely impressed with Murthy's speech, Concordia authorities said. Woodsworth pointed out how Murthy used 'she' to denote both genders. Woodsworth, Concordia's first woman president, said she "liked it very much."

Murthy referred to his wife in his speech, saying, 'After all, my wife is an engineer and a much better engineer than I can ever be.'

"Traditionally, engineering is a very male field," Woodsworth noted. "Women don't grow up building things, machineries. He [Murthy] has a fatherly approach to his employees, which impressed me very much."