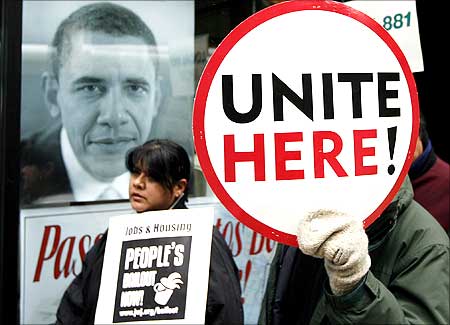 Image: Protesters walk the sidewalk outside the Bank of America building in support of the 200 laid-off workers of Republic Windows and Doors in Chicago.
Photographs: Jeff Haynes/Reuters
World Bank has warned that the global financial crisis is set to worsen. The multilateral financial institution says that more jobs would be lost and more people would be pushed into poverty. The Bank warns that the world will see slower growth that will require tighter and better supervision of the financial system.

When China and India are excluded, GDP in the remaining developing countries is projected to fall by 1.6 per cent.

Global economy should start to grow again in late 2009, but "the expected recovery is projected to be much less vigorous than normal," the report said. Here's a look at the World Bank's growth projections for India and rest of the world... 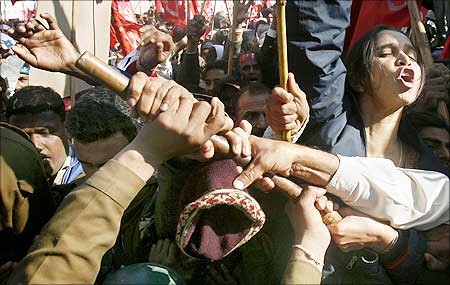 Image: Workers protested against the indifference and inaction of the Indian government to job losses, wage cuts, and closures in the industries.
Photographs: Adnan Abidi/Reuters
India

The World Bank has forecast India's economy to grow by 5.1 per cent this fiscal, the slowest in six years, although India has consistently outperformed the World Bank's estimates in the past.

The Indian economy had grown by 6.7 per cent in 2008-09 against the World Bank's estimate of 6.1 per cent, despite recession setting in most of the developed nations.

The declining output of the manufacturing sector pulled down the economic growth rate in the fourth quarter of 2008-09 to 5.8 per cent and 6.7 per cent in the entire fiscal.

South Asia has seen a drop in capital inflows and investment growth. The GDP is projected to expand 4.6 per cent in 2009, down from 6.1 per cent in 2008 in this region. 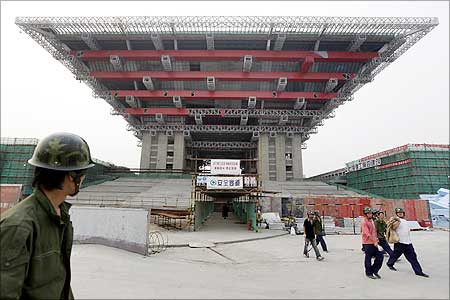 The East Asia and Pacific region will grow by 5 per cent. Amid the financial crisis, China leads with a GDP growth forecast of 6.5 per cent.

The East Asia and Pacific region has felt the full brunt of the crisis because of its close trade links with high-income countries and declining investment as well as a drop in exports and industrial production.

China is weathering the financial crisis better than many others because it does not rely on external financing.

A large government investment program, equivalent to 12 per cent of its GDP (2008), was announced in late 2008. With monetary easing measures and domestic demand helped the economy to an extent. 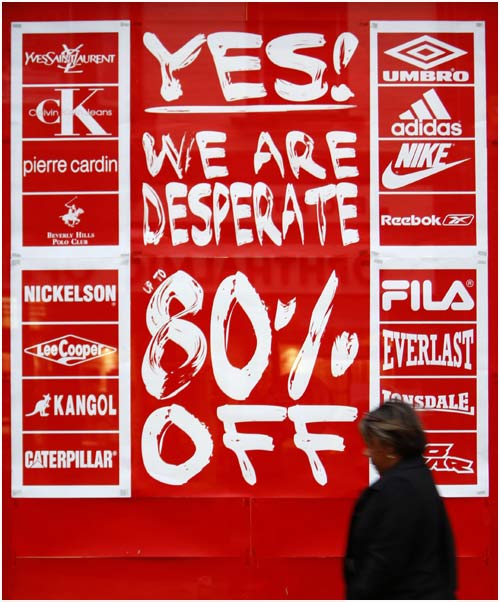 
The World Bank has cut its forecast for the United State this year, predicting a 3 per cent drop in the world's biggest economy, after predicting a 2.4 per cent contraction in March.

Meanwhile, the global trade is expected to plunge by 9.7 per cent this year, while total gross domestic product for high-income countries contracts by 4.2 per cent, the bank said. 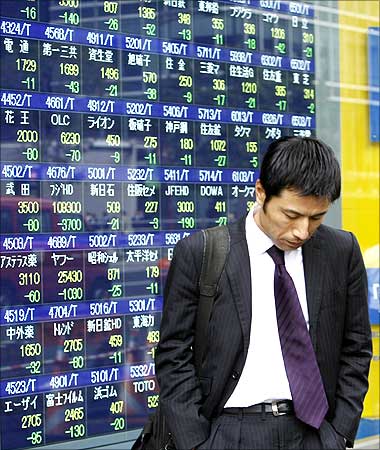 Image: A man walks past a stock index board outside a brokerage in Tokyo.
Photographs: Kim Kyung-Hoon/Reuters
Japan

Japan's GDP will shrink by 6.8 per cent, more than the earlier forecast of a 5.3 per cent fall, says the World Bank study.

The economy had crashed in the last quarter after a fall in the exports sector and drop in domestic demand. The GDP fell at an annual pace of 15.2 per cent in the January-March quarter, the highest fall since 1955. 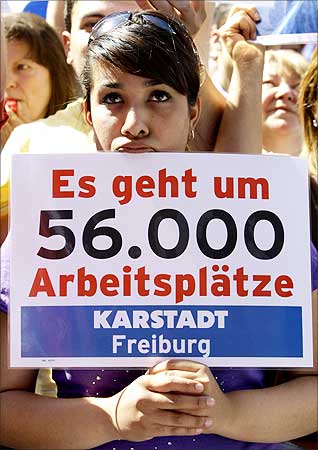 The Euro area's economy may shrink by 4.5 per cent, compared with the previous estimate of a drop of 2.7 per cent.

Europe saw a quarterly drop in GDP in the first quarter of the year, falling by 2.5 per cent. Exports and investment also fell drastically in the 27-nation zone. 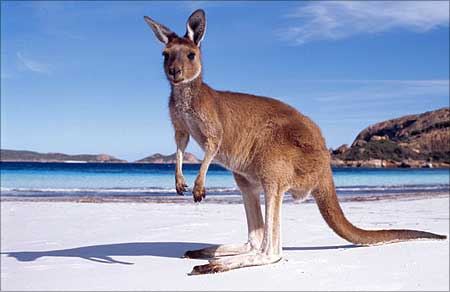 High income nations like OECD (Organisation for Economic Co-operation and Development) countries are estimated to shrink by 4.2 per cent in 2009, while GDP in non-OECD nations will fall by 4.8 per cent.

The report states that extraordinary policy responses by a number of big economies have prevented systemic collapse, they stress the importance of concerted global action while the crisis is still underway.

"To prevent a second wave of instability, policies have to focus rapidly on financial sector reform and support for the poorest countries," said Hans Timmer, Director of the Bank's Prospects Group. 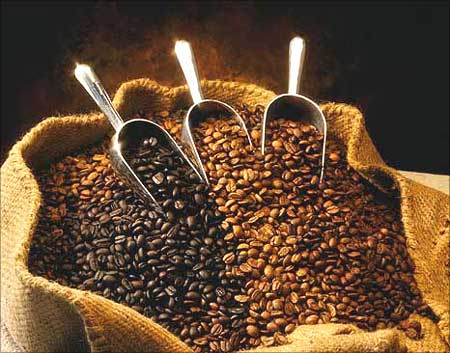 The GDP in Latin America and the Caribbean will fall by 2.2 per cent, says the World Bank report while Brazil will see the GDP fall by 1.1 per cent.

Brazil entered the crisis supported by stronger fiscal, currency, and financial fundamentals than in the past. However, it is feeling the crisis in part because of falling commodity prices, and foreign funds being withdrawn quickly.

Flexible exchange rates in many countries in the region were able to absorb much of the initial shock and avoid systemic problems even as equity markets tumbled. 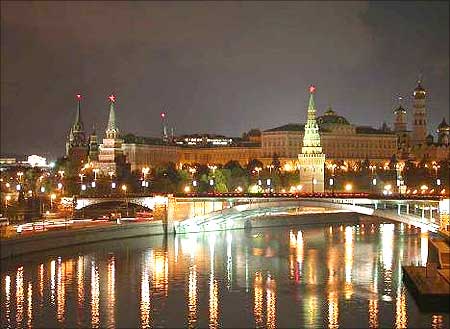 The Europe and Central Asian region will be the worst hit with a GDP fall of 4.7 per cent and Russia will see the biggest GDP fall of 7.5 per cent.

Europe and Central Asia has been the most adversely affected by recent developments, as many countries in the region entered the crisis period suffering from substantial imbalances.

Large current account deficits and domestic overheating made many countries vulnerable to the abrupt reversal of capital flows and weaker export demand that the crisis generated.

Today, developing countries rely heavily on private flows and many countries are being hit by a collapse in corporate finance, with big companies and banks that were powering growth now in distress.

The risk of balance-of-payments crises and corporate debt restructurings in many countries warrant special attention, the report warns. 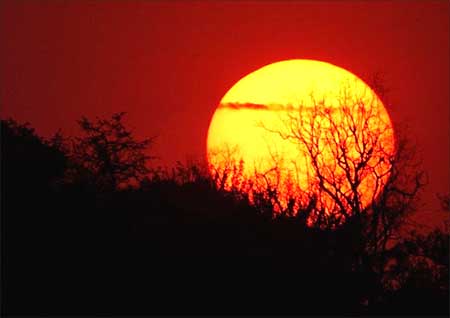 The growth is expected to crash to 1 per cent this year, down from 5.7 per cent on average over the past three years.