Sign in  |  Create a Rediffmail account
Rediff.com  » Business » How he plans to be a millionaire in 2 years 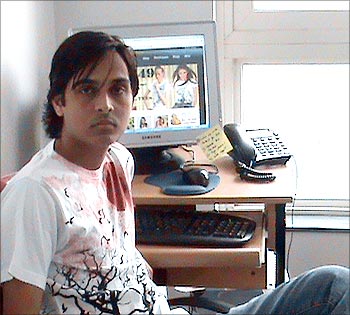 Image: Rahul Yadav all set for a great innings.
Manu A B

They are young, passionate, hard working and have a big dream. For them, stories of sibling rivalry are a joke. Meet the two brothers, Mohit and Rahul Yadav from Jaipur, who have started a unique business online. The venture called Scopial (Scope for Discovery), is an online store for T-shirts created by designers from across the world.

"It is a venture powered by the users for the users," says 24-year-old Rahul Yadav. Users from anywhere in the world can submit designs for T-shirts on the web site (www.scopial.com). The online community of over 3,000 users vote on these designs on a scale of 1 to 5. The best design is selected every fortnight and the designer is rewarded Rs 20,000.

Rahul has been an avid graphic designer all along. His elder brother, Mohit, a chartered accountant with a work experience of five years, compliments the working of the business very well. Rahul is well versed with the technology aspect, while Mohit takes care of the financial issues.

While Rahul gave up a tempting offer job from a leading FMCG company, Mohit gave up a good position in a leading investment bank to start their own company. "Both of us wanted to start our own company. Mohit saw a big opportunity in the designer T-shirts business. Since I loved the idea of creation and designing myself, we went ahead and launched this web site to start with online design and sales," says Rahul.

Rahul used to do a lot of designing work for the in house programmes at the Indian Institute of Technology.  "Our business plan was among the top four plans out of 130 entries in the business plan competition, ISIS'08 at IIT Roorkee and this was a huge motivating factor for both of us," Rahul says.

The response to the site has been overwhelming. "Many designers started submitting their creations and slowly the user base also went up. There is a great demand for our T-shirts. The demand now is mostly from India and picking up in other countries across the globe. It's shipped free of cost anywhere in India in 2-3 days and in a week's time in other parts of the world," Rahul explains.

"The site was launched in December 2008. From June, we started selling the products online. We sold 400 T-shirts in first 2 months and currently the volumes are 500 T-shirts per month. We will reach a target of 4,000-5,000 T-shirts in the next 2-3 months. We have already manufactured 10 designer T-shirts and three more are in the pipeline," says Rahul.

Rahul and Mohit have big plans ahead. They plan to open a big fashion house with all kinds of apparel and have a mix of both big designers and a team of young talented people to design clothes.

However, it has been a tough period for Rahul, who has been working without taking any break for the last six months. "Some days are so hectic we even work for 15 hours. Every penny means a lot. I have even cut down on going out as it means spending more money."

Confident of churning out profits in the next few months, Rahul sees himself becoming a millionaire in the next 1-2 years. Scopial believes that to sell the best, you have to make the best. Here's how the two brothers plan to play their retail game. 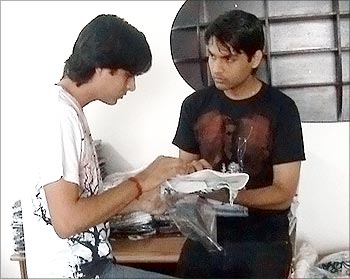 Tell us about how you became an entrepreneur, the difficulties you faced in setting up your enterprise?

After my graduation from IIT-Roorkee, I decided to become an entrepreneur. I was lucky to get my family's support. I discussed my plans with my brother. He also wanted to try his luck in his own venture.

He had a sound knowledge in the financial part and I was good at designing. So we did a lot of brainstorming and agreed on this idea. We have been mentored by Morpheus Venture Partners.

How has the experience of working with your brother been? Any sibling rivalry?

It is a great feeling. It feels good to have your brother as your partner in business. We compliment each other every well. He is a great leader and has a sound knowledge in the financial aspects, so it is a great blessing. We share a good rapport.

How has the response to your venture been so far?

The response so far has been great. We have got professional designers submitting their creations. So far all the designs that have won have been by foreign artists. We have a database of over 500 designers. 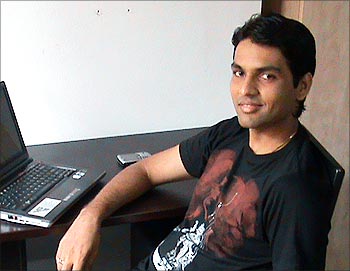 We started mostly with my brother's savings and we took some loans. We spent about Rs 7-8 lakh (Rs 700,000-800,000) on setting up the web site. We also had to spend on imported US cotton, the material used for T-shirts, on product development and on equipment. Every month we spend Rs 40,000 on prize money.

Why did you decide to start a T-shirts venture? How does the company operate?

We saw good potential in this space. With new designs from across the world, our T-shirts are unique so it does have a big market in India and abroad. All the creations are submitted on the web site. It is ranked according to the users' preferences.

So we are able to confidently launch T-shirts that people like. Many of our users refer us to other buyers. Since these designs have mass appeal, it is easier to sell it as well. 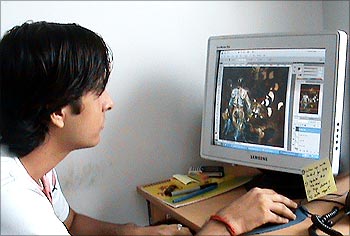 What are the challenges that you face?

It is a challenge to offer the best designs, print them precisely, considering the shades and colours. We import US cotton and use the best quality printing techniques. We have to continuously test the procedures to make sure the product is stylish and of good quality. It is extremely difficult to get the right people.

How many people are there in the company?

We are a team of 8 people at the office and we have about 10 people in the manufacturing side. We have tied up with DTDC (a courier service) to deliver the goods across India.

How did you get foreign designers to join you? How many of them are there?

We contact many of them ourselves. The prize money was attractive and the design being printed on the T-shirt with their name on the label is an additional advantage for these young designers. The designs are awesome and attractive.

How did you build an online community?

We did a lot of campaigns, we also got publicity through blogs and other referrals. The best thing about the community is that response is spontaneous. We need not push them to do reviews. Users try out the T-shirts themselves and publicise them. That is a great initiative. 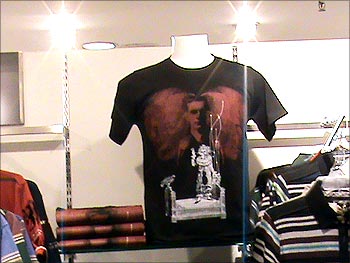 How are the T-shirts priced? How many have you sold so far?

Only the winning designs are used for T-shirts?

The winning designs are printed on the T-shirts. The voting is a continuous process. People get points for voting, referring the products. The designs which do not get selected remain on the website for 90 days so that more people can see and appreciate the designs.

How do you see the company growing when there are established players doing the same kind of business?

The kind of designs we offer make a big difference. With designers from across the globe submitting their creations, there is a distinctive touch to the feel and look of the design. There is a good cultural touch in the design. All T-shirts are made from US imported Supima cotton. They are screen-printed using the best ink and there is a guarantee for colour. If the customers are not happy with the product, a refund is offered within 60 days of purchase. 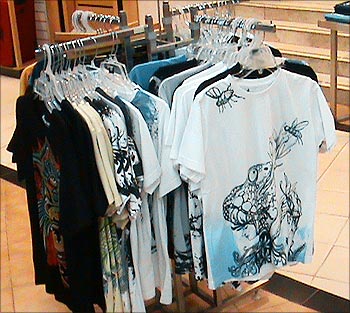 How do you sum up your experience as an entrepreneur?

I am living my dream. I have learnt a lot from my experience, I am familiar with almost all aspects of running a business. We have put in lots of hard work to make things work. I meet lot of people who think going to office is a burden, they are so bored. But for me, the work means a lot. It is a good feeling to go to work.

How do you see your company's growth in the coming months?

Two years down the line, we will be visible in all major stores across India. In a year, we will be selling 5000-10,000 T shirts every month.

It is a very profitable business. I would not like to reveal our revenue projections now. 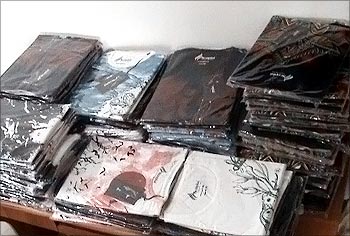 How has your grooming at IIT helped you?

It was at IIT that I seriously thought about starting a business venture. I used to take part in all entrepreneurship development programs.  I was very enthusiastic about making business plans. I used to do a lot of designing work for the in-house programmes at IIT.

How important is money to you?

I am not working to make money, although it is definitely required to sustain oneself. Earning money helps as it helps us develop the business. One cannot be motivated enough if one does not make revenues.

Innovation is vital for any business to flourish. We always see that we have the best and unique offerings. The technology, the dye used for printing, the graphic, lay out of the design, etc., play a role in making a fine product. 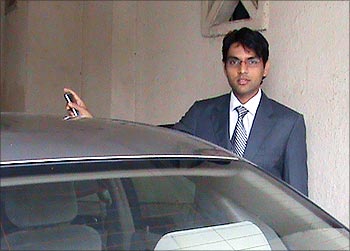 Tell us 5 things that entrepreneurs must do to succeed.

The support from family and friends is crucial to get started. There are times when you feel extremely low and you need their support and help. The idea to start a venture must come from within. One must be very sure about the business plan. If I face any problem and send an e-mail to my friends, I get good response from all of them.

Running a business is like taking care of a baby, you must be very patient with it. You need to minimise your spending. Cut down on every extra expense to make that extra buck that will keep you going.

We have cut down on shopping, movies, hanging out with friends. I am extremely cautious while spending money on anything.

You must have a sound knowledge about the business. You should not be fooled by people. A good team with the right people is a must. You must have faith in the idea.

What are your company's future plans?

We plan to export T-Shirts to the United States, Europe and Middle East (West Asia).

We plan to open a big fashion house with all kinds of apparel. Besides, a team of our own designers, we plan to associate ourselves with the famous designers as well as the new talent and have a good mix of fashionable attire. We want our brand labels to be famous across the globe.

Mohit's mantra is work hard, party harder. I love watching movies and listening to music. But, since I don't get much spare time, I listen to music while I am designing.