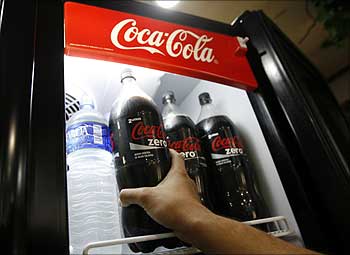 Image: A man takes a bottle of Coke Zero out of a fridge at a supermarket in Caracas.
Photographs: Edwin Montilva/Reuters

The business of building brands is a tough one. And it takes years of hard work, great service, great product, sustained socially responsible work and a lot more to create a brand that people hold store by. In today's ever-changing economy, entrepreneurs seek specialists' help to launch their products and create brands.

Often big corporate houses cough up millions to help bolster their brands so that consumers remember who they are. Once a brand succeeds in striking a chord with the consumers, half the marketing battle is won. 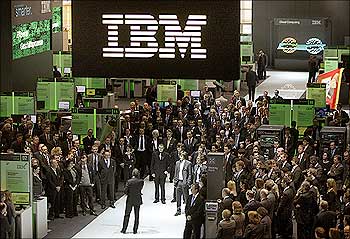 Image: Employees follow a speech at the booth of IBM at CeBIT computer fair in Hanover.
Photographs: Hannibal Hanschke/Reuters

The company's brand value is worth $59,031 million. Its parent company is International Business Machines.

In 1972, the company logo, designed by Paul Rand had horizontal stripes replacing the solid letters to suggest 'speed and dynamism.'

A resurgent tech-services business together with highly profitable software edges Big Blue ahead of rival Microsoft. 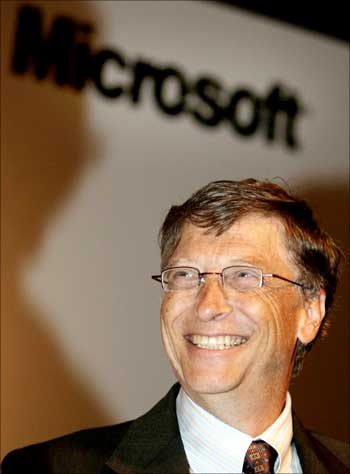 Its brand value is worth $59,007 million. Its parent company is Microsoft.

Microsoft Corporation is an US multinational computer technology corporation with over 79,000 employees in 102 countries. It develops, manufactures, licenses and supports a wide range of software products for computing devices.

Headquartered in Redmond, Washington, USA, its best selling products are the Microsoft Windows operating system and the Microsoft Office suite of productivity software.

Windows Vista bugs and Apple's withering 'I'm a Mac' ads challenge the software giant despite its monopoly. It is now rolling out a new ad campaign. 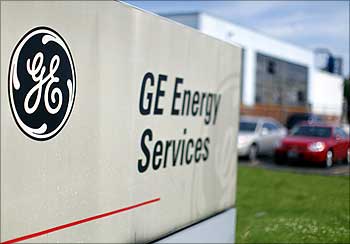 Image: The sign at the entrance to a General Electric Co. facility in Medford, Massachusetts.
Photographs: Brian Snyder/Reuters

GE is the fourth most recognised brand in the world, worth $53,086 million. Its parent company is General Electric.

The group CEO Jeffrey Immelt introduced a set of changes in the presentation of the brand commissioned in 2004, after he took the reins as chairman.

The changes were designed by Wolff Olins. 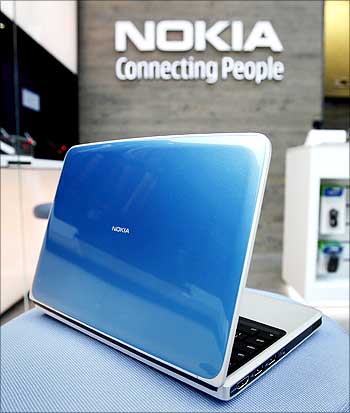 Its brand value is $35,942 million. Its parent company is Nokia.

Nokia Corporation has been in the telecommunications business since the 1960s and has become a global leader of the industry.

The original Nokia logo was designed in Tampere in 1865. It went through many modifications since then.

Therefore, when it came to designing their logo, Nokia Co. made every effort to make its logo represent the company's mission. And thus, 'Nokia Connecting People' logo came into being. 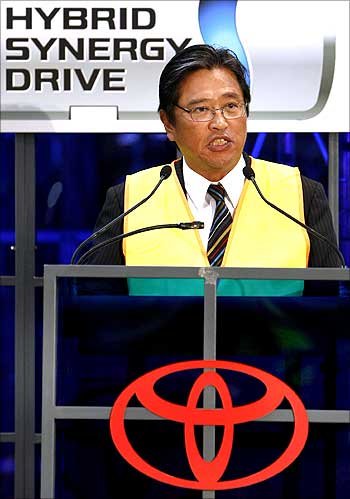 Its brand value is $34,050 million. Its parent company is Toyota Motor.

The current Toyota mark consists of three ovals: the two perpendicular center ovals represent a relationship of mutual trust between the customer and Toyota.

These ovals combine to symbolise the letter 'T' for Toyota.The space in the background implies a global expansion of Toyota's technology and unlimited potential for the future.

Back in 1936, to coincide with the launch of its eagerly awaited first passenger car, Toyoda Automatic Loom Works Ltd. held a public competition to establish a new symbol mark to promote its vehicles.

The company indicated that the new design should convey the feeling of speed. Twenty-seven thousand entrants answered the call and submitted their ideas to Toyoda.

The winning design led to a change in the name of the automobiles and plants from 'Toyoda' to 'Toyota.' The changed name was chosen because the number of strokes to write Toyota in Japanese (eight) was thought to bring luck and prosperity.

The Model AA, Toyota's first passenger car, became the first automobile to use the new name. 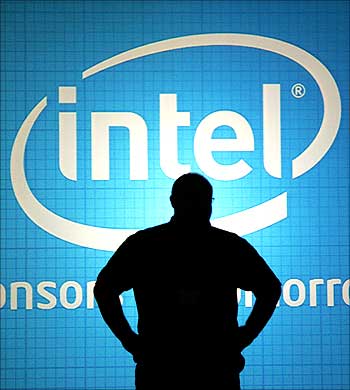 Image: A man stands in front of an Intel wall at the 2009 Computex trade show in Taipei.
Photographs: Pichi Chuang/Reuters

Its brand value is worth $31,261 million. Its parent company is Intel.

The original Intel logo with a 'dropped-e' in it was created by Silicon Valley pioneers Robert Noyce and Gordon Moore, 39 years ago as they were forming their new 'integrated electronics' company.

In 1991, the company introduced the 'Intel Inside' slogan with the Intel logo.

The company's sales are strong and Intel still pays to place its logo in the ads of customers like Apple and Dell, but the Federal Trade Commission is investigating the practice. 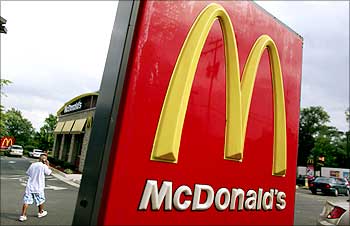 Its brand value is worth $31,049 million. Its parent company is McDonald's.

McDonald's Corporation is one of the largest chains of fast food in the world.

It mostly sells burgers and fries but has recently introduced fancy coffees, breakfast sandwiches, and wraps.

The McDonald's Golden Arches logo was introduced in 1962. It was created by Jim Schindler to resemble new arch shaped signs on the sides of the restaurants. He merged the two golden arches together to form the famous 'M' now recognised throughout the world.

The McDonald's name was added to the logo in 1968.

While the physical arches were dropped out from all the restaurants' building design, the Golden Arches have remained in the McDonald's logo. 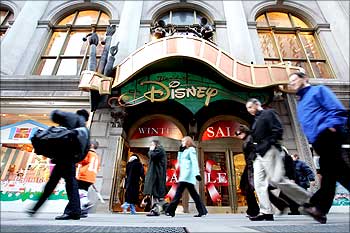 Its brand value is worth 29,251 million. Its parent company is Walt Disney.

Co-founded by Walter Elias Disney, the Walt Disney Company today has branched out to various entertainment studios, theme parks, products and other media productions with an annual revenue of approximately $30 billion.

The Walt Disney logo is a 'stylised version of the founder's signature' that signifies the brand name and promises secure, cheerful and quality American mainstream entertainment.

Other than the regular logo, the company uses different logos on its different products. A castle on a blue background version of the Walt Disney logo is used for the movie releases and as the curtain-raiser to its films. 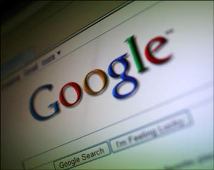 Its brand value is worth $25,590 million. Its parent company is Google.