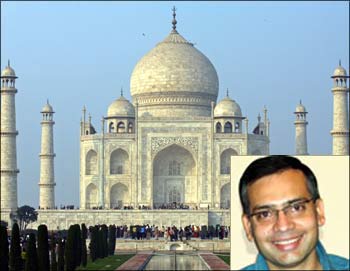 Infringements related to brand names and trademarks are a never-ending story. In the latest dispute over a brand name, the Tata Group has objected to the word 'Tata' used in oktatabyebye.com, a travel community site owned by MakeMyTrip.

Tata Sons, the holding company of the Tata Group, appealed to the World Intellectual Property Organisation against the domain name stating that oktatabyebye.com aims to create confusion in the minds of consumers using the Tata brand name.

Despite MakeMyTrip's efforts to prove its stand, the Tatas won the case, a move described by MakeMyTrip as 'shocking'.

MakeMyTrip concurs that the word 'Ta Ta' is generic and is associated with travel. Tata Sons, however, refused to comment as the case is sub-judice.

Justifying MakeMyTrip's stance, Deep Kalra, co-founder of the company, says, "The business of oktatabyebye does not in any way compete with any known Tata Group business. The phrase Ok-Tata-Bye-Bye is a form of greeting and hence connects instinctively to travel. MakeMyTrip has never attempted to confuse their customers or travellers by soliciting them using any Tata product as the peg."

"The site is important to MakeMyTrip as there is a wealth of honest traveller opinion in the form of hotel reviews, practical travel advice, which are invaluable to a traveller today," Kalra explains. 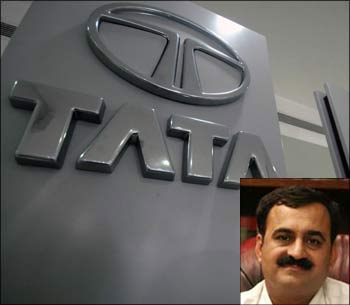 Cyber law experts point out that there is little merit in the Tata argument as the word 'Ta Ta' is a generic term and it does not clash with any of Tatas' business interests.

Besides, there are several domain names with the word 'Tata' as a part of it.

What the verdict says

According to the WIPO verdict, MakeMyTrip has been accused of intentionally attempting to make commercial gain by using the word 'Ta Ta'.

The judgement by Pawan Duggal, WIPO panelist, states: 'The complainant (Tata Sons) has proved that the respondent (MakeMyTrip) has intentionally attempted (and apparently succeeded) to attract, apparently for commercial gain, Internet users to the web site, by creating a likelihood of confusion with the Tata trademark.'

Asked to comment on this, Duggal said he has nothing more to add as the verdict is already out. "The aggrieved parties can seek legal remedies." 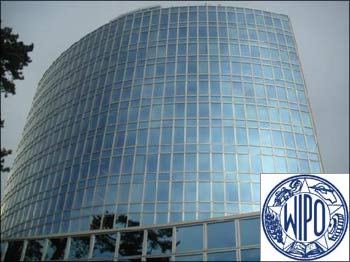 The WIPO judgement states that 'since the Tata trademark is widely known and the respondent has no rights in it, the most likely reason why the respondent could have wanted to register and use a domain name incorporating the Tata mark was that it knew of this mark and wanted to use it in the domain name in order to profit from the traffic generated by the fame of the mark, and not for any legitimate non-commercial or fair use purpose.'

'The aforesaid conduct of the respondent in diverting web traffic for commercial gain is a manifestation of the bad faith registration and use of the said domain name,' the judgement adds.

Meanwhile, the site has several responses from readers supporting the its name, stating that Tatas are trying to establishing a monopoly and it is illogical as the world 'Ta Ta' doesn't signify the Tata Group. 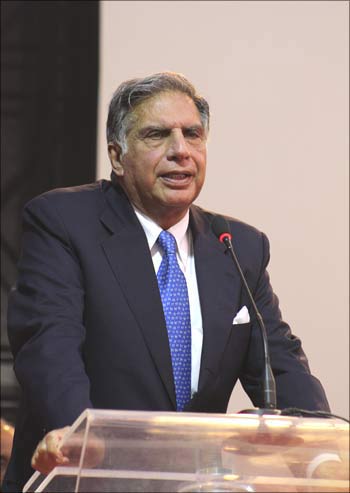 What the experts say

Pointing out that the IT Act is silent on such disputes, Vijay Mukhi, Consultant, (e-Corporate Governance & Cyber Law), DSK Legal, says, "The Tatas are going too far because the word 'Ta Ta' is part of the language we speak and it is also part of a larger word in the domain name."

"The name cannot be stated as an infringement on the Tata trademark. Tatas are not into the travel business so there is no issue of any confusion in the minds of the people," Karnika Seth, Cyber lawyer & Partner, Seth Associates says.

"It is not as if the Tatas are trying to establish a monopoly it is definitely a well known mark. If they are planning to start something in this field, there could be confusion," Seth explains.

"The context of the site is not related to the Tatas in any way," Mukesh Goyal, cyber law expert said. 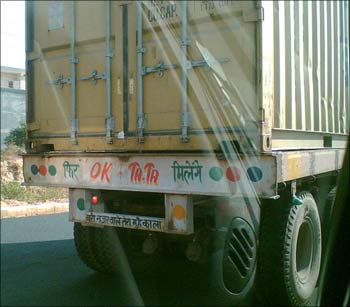 Image: A truck with the ubiquitous message emblazoned on the rear: 'OK Tata '
Photographs: Rediff Archive

There has been a wide debate on this issue in the forms of blogs and letters from readers. Many readers have responded stating that the web site does not create any confusion over the Tata brand name.

A blogger, Sai Deepak, says, he found several sites which use the word 'Tata'. "One would like to hear the panel's views on these two sites. And here's a question - if I were to run a site called 'ihateapple.com', where I am probably referring to the fruit, would I be guilty of infringing the rights in the domain 'apple.com'? This is not to simplify or trivialise the issue, but to understand the rationale of the panel's decision," he states.

Another reader has listed a host of domain names like tatabotata.com, babytata.com, tatavega.com, ajtata.com, tatacubancafe.com etc and asked if Tatas will file a case against these.

'It is also disturbing to note that a giant like Tata can resort to bullying small but proud companies like oktatabyebye.com,' says another response. 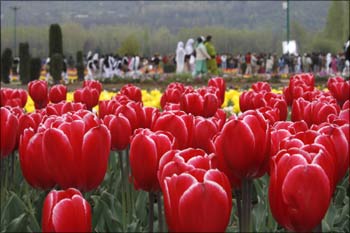 Some Tata supporters too

But there are a few Tata supporters too, like a reader who says he is from Malaysia where Tata brand is well known with Tata trucks and buses plying there. "I showed the portal name to a couple of friends and asked them what they thought about it and their immediate reaction was that it is something promoted by the Tatas."

The Tatas' tryst with names

The Tatas won this case with the WIPO restraining the company from using any of the Tata names. In another case, the government of Bhutan had to remove the word Tata from its 'Bhutan Tata Super Lottery' after the Tatas objected to it. 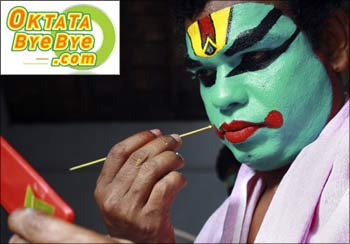 Image: An artist gets ready to perform during festivities marking the start of the annual harvest festival of Onam in Kochi. (Inset) The oktatabyebye.com logo.
Photographs: Sivaram V/Reuters

So will the Tatas win this time?

MakeMyTrip will soon present its case in the high court. It believes that it has a strong case.

"In the Indian context, we're all quite familiar with the ok-tata-byebye phrase while saying 'goodbye' or in travel-related conversations. Not once does the phrase in common usage have any relation with the Tata company, we're optimistic that the court will rule in our favour," says Deep Kalra.

Vijay Mukhi too feels that the MakeMyTrip could win the case, "I believe makemytrip.com has a very strong case and should win."