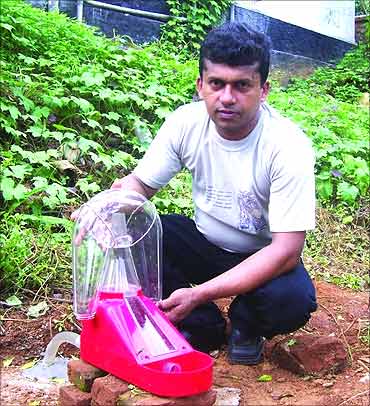 Image: Mathews K Mathews with the Hawker.
Manu A B in Mumbai

Malaria takes away the lives of thousands of people in India. Unfortunately, the number of victims is only increasing with each passing year.

However, this situation is likely to improve with a simple, yet effective, solar mosquito trapper-cum-destroyer called Hawker, invented by Mathews K Mathews. His mission is to create a mosquito-free environment in the most innovative and cost-effective manner (See the video of the Hawker in the last slide).

After five years of hard work, research and experiments at his village, Kalaketty (in Kottayam district) in Kerala, Mathews developed the first 'solar mosquito destroyer' in the year 2000.

Six years later he won the patent for the solar mosquito destroyer, Hawker. While this device is targetted at only mosquitoes, Mathews is set to launch a solar-cum-electric mosquito and housefly destroyer this month.

"This cost-effective and eco-friendly product can be installed anywhere; it does not use any chemical to destroy the mosquitoes and flies unlike other mosquito repellents which emit gases that could cause asthma and lung cancer," Mathews says.

However, he is disappointed at the pace of his company's development. An indoor version of the mosquito destroyer has also been developed and tested but lack of funds has crippled his project.

He himself uses these products to make his home a mosquito-free area.

about Mathews' mission to eradicate mosquitoes... 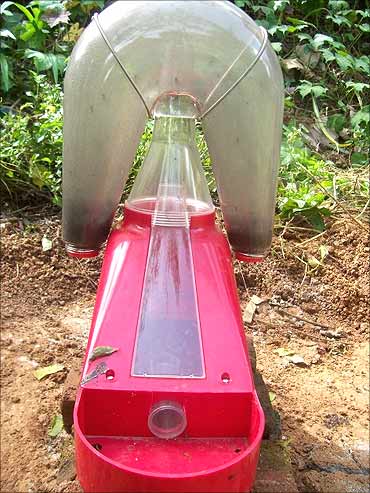 "Our biggest hurdle has been the lack of funds. We have approached several government officials, including the State health minister, and given them a demonstration. But no one has extended any help, except the National Innovation Foundation which helped us with a grant," Mathews who has so far invested Rs 10 lakh (Rs 1 million) into the project. He has borrowed the money from banks and family members.

A project that he started accidentally at the age of 25 has now become a full-time occupation. After getting a patent, he thought about setting up a company, Kine Technologies & Research India, to focus on developing and marketing this device.

Enthused by his invention, his cousin Mathew Davis and brother Georgekutty K Mathew became his business partners. His elder brother, who is abroad, helped him with funds.

The three of them worked day and night to put things in place. Initially, there was a lot of criticism from everywhere. Later, people realised that there was some value to what they were doing. 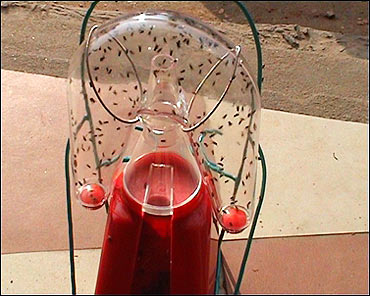 "We had to change the design many times and make it as compact as possible. We also placed the device at many places to check how it works. However, we can make steady progress only if we have more funds for our experiments," says Mathews.

"A big challenge was to find a company that would help us manufacture the product," he says.

Finally, their search for a company that could make the mould for this product ended when they found Laxmi Plastics in Coimbatore. They held talks with the company officials and it worked out well for the production and marketing of the products.

"There is a lot of interest in Hawker. The two-in-one mosquito-and-housefly destroyer has already received many enquiries. It could be a threat to the existing mosquito repellents as well. Besides this, other repellents do not kill mosquitoes. They only chase mosquitoes away," says Mathews.

A shopkeeper near a hospital (which installed the Hawker) in Kanjirapally said that the mosquito repellent sales dropped after this device was installed. 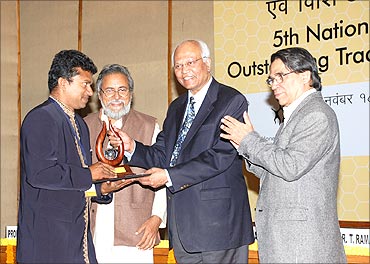 Image: Mathews receives the innovation award from R A Mashelkar.

Forty-year-old Mathews has spent 15 years in carrying out various experiments and bringing out these products. He even decided against getting married to devote his life completely to eliminate the mosquito menace with effective low-cost devices.

"I cannot afford to devote my time to anything else other than work. My parents were against me taking this risk but now they have accepted my work," says Mathews.

A nature lover, Mathews loved to spend most of his time outdoors as a kid. He used to make traps for rodents, squirrels, birds and wooden toys when he was just ten years old. Later, this innovative streak in him took the shape of various versions of the mosquito trapper, Hawker.

The Hawker won the National Innovation Foundation's award for the best innovation from a state. The World Economic Forum had also shortlisted Kine Technologies for its Technology Pioneers awards. 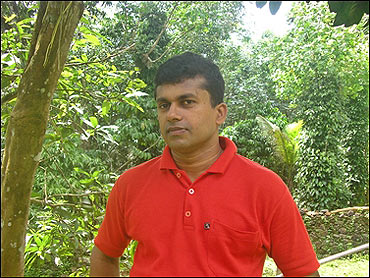 The birth of an idea

"This thought was always at the back of my mind. A few months later, I noticed a lot of mosquitoes near the waste tank of our cowshed. They were entering through a small gap between the concrete slabs covering the tank."

"I knew that this humid and stinky place was the breeding ground for mosquitoes. I tried to relate it to the incident in the room where the mosquito tried to escape but was unsuccessful," Mathews explains. 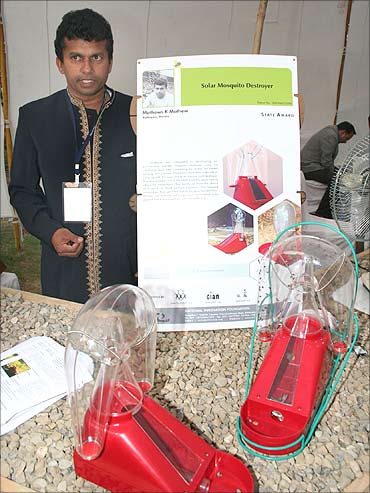 An outdoor unit, weighing 1.5 kg, it can be installed near septic tanks. It kills mosquitoes at the breeding ground itself. The product is placed in such a manner that it gets direct sunlight on the top of the dome.

The mosquitoes move up through the trap hole into the conical channel to reach the dome shaped roof area, which is actually the solar furnace and get trapped. 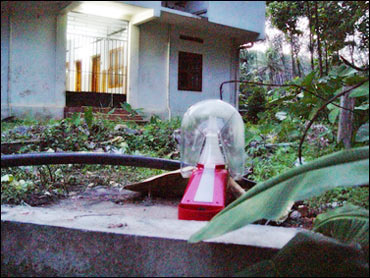 This unit has no running or maintenance cost. It requires at least 30 minutes of direct sunlight a day (between 11.00 am to 4.00 pm).

"However, people have noticed a drop in the number of mosquitoes after they installed this device. We have so far supplied the Hawker to military offices, hospitals, schools and individuals in Tamil Nadu and Karnataka, besides Kerala."

Priced at Rs 1,400, this 'green' product scores as it does not involve any running or maintenance cost. 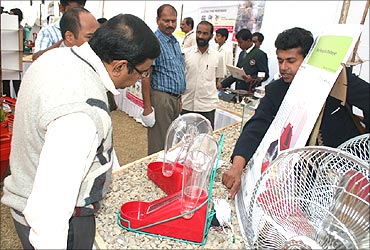 Image: Mathews at an exhibition.

A milestone for the company

It is a turning point for the 3-year-old company that is set to make strong inroads into the market with a small yet powerful device.

"We have been getting enquires from all over the world. At this stage, we are not ready to export our product. But it will not be long before we turn truly successful," says a confident Mathews.

This low-cost product stands to gain as other products to kill flies are more expensive and consume more electricity.

An Italian company wanted to work with them in developing the product on a large scale. "I always feel that big companies tend to swallow the smaller ones. I may lose my rights over the product and this hard work will never be appreciated," says Mathews.

He wants to move at a pace he thinks is best for a small start-up. 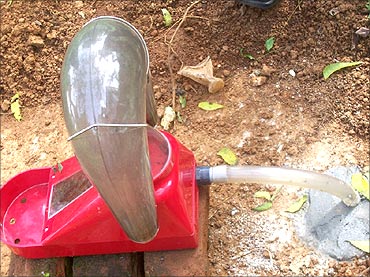 The solar-cum-electric outdoor device will have a light to attract mosquitoes and a unit to keep food, juices, etc to attract flies as well. "We have tested the device at some fruit stalls and restaurants. It has worked very well," says Mathews.

The device needs to be switched on only during the evening to kill the flies. Till then, there is no need to use electricity to trap these pests unlike other fly trappers.

"The system uses the user's body heat to draw away the mosquitoes. I will not be able to reveal much about this product as I have applied for the patent," Mathews points out. 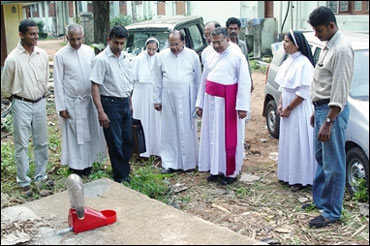 Mathews knows that the United States and European nations promote innovation and entrepreneurship. The enquiries and interest from people abroad itself is an encouraging factor for him.

Any regrets that he happens to be in India? "No. Since necessity is the mother of invention, had I been in any developed nation, I would not have faced this problem and I would not have become an innovator," he says.

Legendary American inventor Thomas Alva Edison is his inspiration. "Edison did not have any formal training yet he developed many devices. One need not be highly qualified to become an inventor. In fact, some of the most successful people like Bill Gates are college dropouts," muses Mathews.

"I used to regret that I did not even complete my graduation, but not anymore. The appreciation people have shown so far itself motivates me to keep going strong, unruffled."

"I know I have a big challenge ahead but I know that our product can conquer the world one day. This is my dream," he says.

His advice to budding entrepreneurs? You need to have a good idea, be ethical in whatever you do, believe in God, and work hard to fulfill your mission.