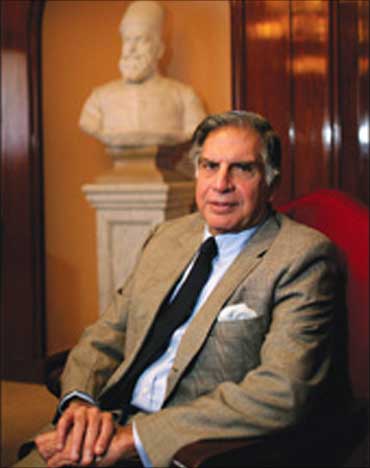 "One hundred years from now, I expect the Tata Group to be much bigger than it is now. More importantly, I hope the group comes to be regarded as being the best in India -- best in the manner in which we operate, best in the products we deliver and best in our value systems and ethics." - Ratan Tata.

The architect of India's largest conglomerate, Ratan Tata is set to retire in 2012 at the age of 75.

In November last year, he had told the Wall Street Journal: "The successor, I would hope, would have integrity and  our value systems in the forefront and hopefully would carry on the path that we have tried to set for the company's growth.''

The $70-billion Tata Group, which has embarked on a global search for a successor to Ratan Tata formed a selection committee comprising five members, including an external member, "to decide on a suitable successor".

The committee would look at candidates both within the organisation and outside.

Tata purposely stayed off the committee so that it has the full freedom to take its decision.

Take the poll at the end of the slide show to choose who you think would be the best person to lead the Tata Group. And if you have some other suggestion, please mention it in the message board below.

Click on NEXT for the names of the possible candidates. . . 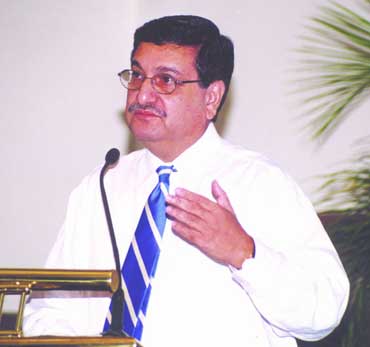 "We are looking both within the organisation and outside. It would certainly be easier if that candidate were an Indian national," says Ratan Tata.

Dismissing all suggestions that only a Parsi with a Tata name would succeed him, Tata recently said that the new incumbent would neither be a pro-Parsi nor an anti-Parsi, but the 'right person'.

Let us take a look at the probable candidates from within and outside the Tata Group.

Ishaat Hussain took over as finance director of Tata Sons in July 2000. Earlier, he joined the board of Tata Sons as executive director in July 1999. He is also a director of several Tata companies, including Tata Industries, Tata Steel and Voltas. Besides, he is the chairman of Voltas and Tata Sky.

Hussain is a member of the Securities and Exchange Board of India committees on insider trading and primary capital markets. He is also a member of the Confederation of Indian Industry's finance committee.

Prior to joining Tata Sons, Hussain was senior vice president and executive director of finance at Tata Steel for almost 10 years.

Hussain graduated in economics from St Stephens College, New Delhi. He is a chartered accountant from the Institute of Chartered Accountants in England and Wales. 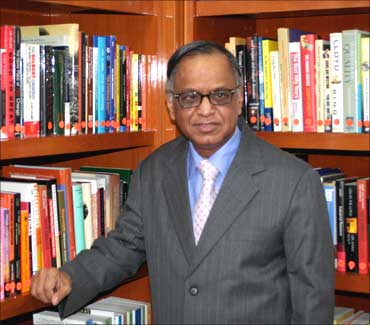 Infosys founder and chief mentor Nagavara Ramarao Narayana Murthy is set to retire in 2011 at age 65.

At Infosys he articulated, designed and implemented the Global Delivery Model which has become the foundation for the huge success in IT services outsourcing from India.

After stepping down as CEO in 2002, he has broadened his scope of activities to social services as well as promoting India globally.

If Murthy is chosen to lead the Tata Group, he would have one full year to get oriented with the activities of the Tata Group, and could serve the company for several years. 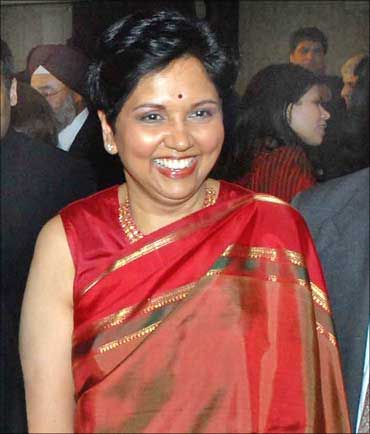 Another name doing the rounds is Chennai-born Indra Krishnamurthy Nooyi.

The chairperson and chief executive officer of PepsiCo Incorporated was considered one of 'The TopGun CEOs' by Brendan Wood International, an advisory agency.

In January 2008, Nooyi was elected chairwoman of the US-India Business Council, a non-profit business advocacy organisation representing more than 300 of the world's largest companies doing business in India.

Indra Nooyi has been named 2009 CEO of the Year by Global Supply Chain Leaders Group.

Nooyi however has not said that she would be interested in taking over the reins at the Tata Group. 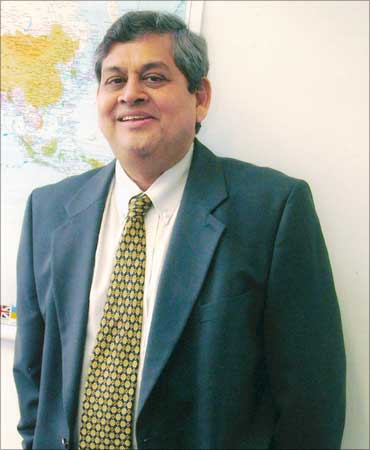 As managing director of Tata Industries, Kishor Chaukar is responsible for providing strategic direction and support to the Tata companies.

Chaukar was previously the managing director of the ICICI Securities and Finance Company, as well as a member of the board of directors of ICICI.

He has also worked with Bhartiya Agro Industries Foundation, a public trust engaged in rural development, and Godrej Soaps.

Chaukar is a post-graduate in management from the Indian Institute of Management, Ahmedabad. 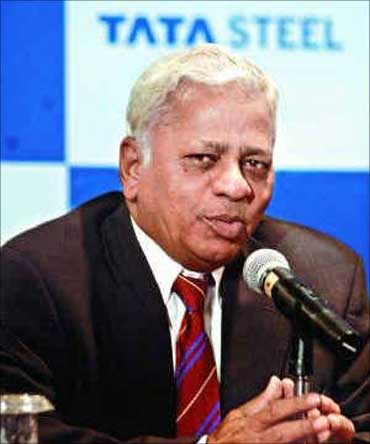 B Muthuraman is a B.Tech in Metallurgical Engineering (IIT Madras, 1966). He did his MBA from Xavier Labour Relations Institute (XLRI) Jamshedpur in 1975 and Advanced Management Programme from CEDEP/INSEAD, France.

Muthuraman joined Tata Steel in 1966 as a graduate trainee.

He was appointed as managing director of Tata Steel on July 22, 2001.

He was conferred 'Management Man of the Year 2006-2007 Award' by Bombay Management Association.

Muthuraman retired as MD on September 30, 2009. The board of directors of the company re-appointed as an additional director and designated him as the non-executive vice chairman of the company with effect from October 1, 2009.

Muthuraman is an avid reader and a keen golfer and cricket enthusiast. As an insider he is conversant with the working of the Tata Group very well. 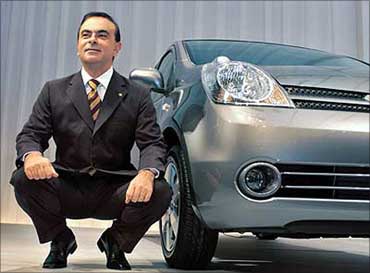 Image: Carlos Ghosn CEO and President of Renault of France and Nissan of Japan.
Photographs: Reuters

Carlos Ghosn, CEO and president of Renault of France and Nissan of Japan

Carlos Ghosn is largely credited with turning around Nissan.

As an outsider in charge of one of Japan's largest companies, Ghosn has been extremely successful.

He was voted Man of the Year 2003 by Fortune magazine's Asian edition and is also on the board of Alcoa, Sony, and IBM.

Ghosn became CEO of Renault, in 2005, while remaining CEO of Nissan as well.

In 2004 he was added to the Japan Automotive Hall of Fame.

He was one of the first global CEO to laud Tata Nano. 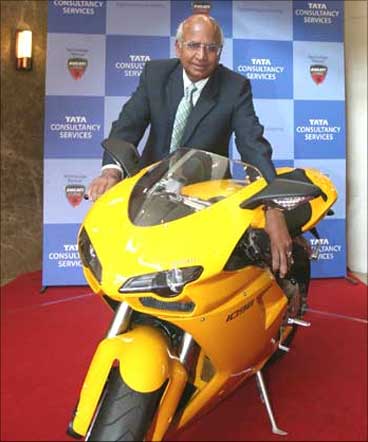 Beginning his career with TCS as a junior engineer, he rose through the ranks and eventually was charged with setting up TCS' operations in the United States in 1979 in New York City, which has since grown to over 40 offices throughout the country.

On April 28, 2009, Ramadorai was awarded the Commander of the Order of the British Empire.

His tenure as CEO and managing director of TCS ended on October 5, 2009. 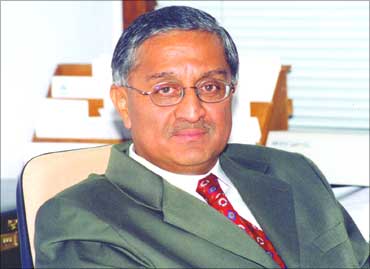 Gopal studied physics at Calcutta University and engineering at IIT. From 1967, he served Hindustan Unilever for over three decades in various capacities.

In 2007, he authored his first book, The Case of the Bonsai Manager, published by Penguin India. 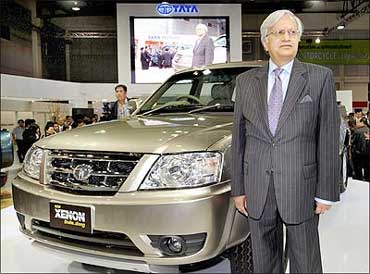 Ravi Kant holds a Bachelor of Technology degree from the Indian Institute of Technology, Kharagpur and a Masters in Science from the University of Aston, Birmingham, UK.

He is on the board of Voltas, TAL Manufacturing Solutions and Tata Motors European Technical Centre.

Prior to joining the Company, he was with Philips India Limited as director of Consumers Electronics business.

He was appointed as the non-executive vice-chairman on the Board of Directors of the company with effect from June 2, 2009. 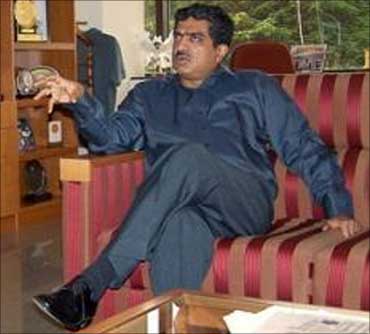 Nandan Nilekani, after graduating from IIT Bombay in 1978, joined Mumbai-based Patni Computer Systems where he was interviewed by N.R. Narayana Murthy.

Three years later, in 1981, Murthy walked out of Patni following a disagreement with one of the Patni brothers. His entire division walked out with him.

The defectors decided to start their own company, Infosys.

He currently serves as the Chairman of the new Unique Identification Authority of India. 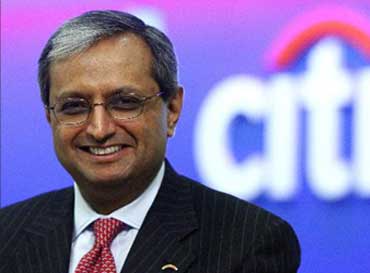 The Nagpur-born CEO of Citigroup managed to turn around the fortunes of Citibank when it announced a net income of $4 billion in Q1, 2010.

Pandit earned a PhD in Finance from Columbia University in 1986.

He also received an MS degree in 1977 and a BS degree in electrical engineering in 1976. 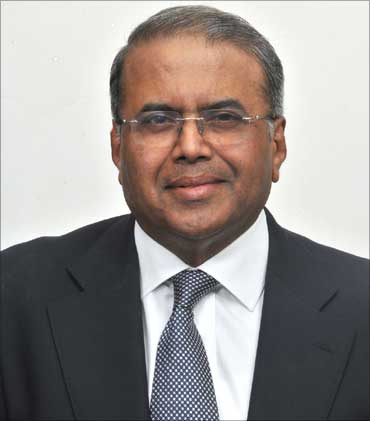 H M Nerurkar has been with the company since February 1982.

He joined the Tata Steel board as executive director in April 2009 and on October 10, 2009 took over as the managing director of Tata Steel in charge of India and South East Asia operations.

He has done B. Tech. in Metallurgical Engineering from the College of Engineering, Pune. 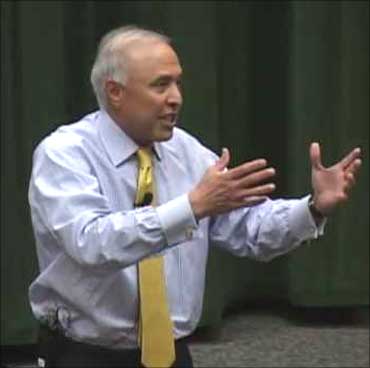 He is a senior adviser at the private equity firm KKR. He serves on the board of directors of Cisco Systems and Safeway, Inc.

He received an honarary knighthood from the Queen at Buckingham Palace on March 10, 2010. 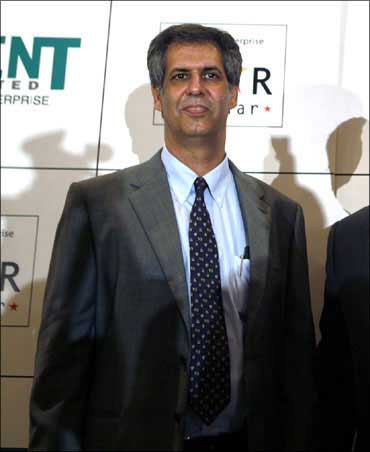 And then there is, of course, Noel Tata.

Noel Naval Tata, 53, on July 29 added yet another interesting chapter to the Tata Group's succession story.

The half-brother of Ratan Tata resigned as the managing director of retail firm Trent, and joined Tata International, which handles the group's overseas trade, in the same position.

Tata International did not have a managing director so far and was led by chairman B Muthuraman.

Noel will also continue to be Trent's non-executive vice chairman, another newly-created position.

So who will succeed Ratan Tata as the head of the $71-billion Tata Group? That's the question that has been doing the rounds in corporate circles for some time now.

Click on NEXT to take the poll to decide who in your opinion is best suited to lead the Tata Group after Ratan Tata . . .


The Tata Group has embarked on a global search for a successor to Ratan Tata who will retire in December 2012. Who according to you will be best suited for the job?