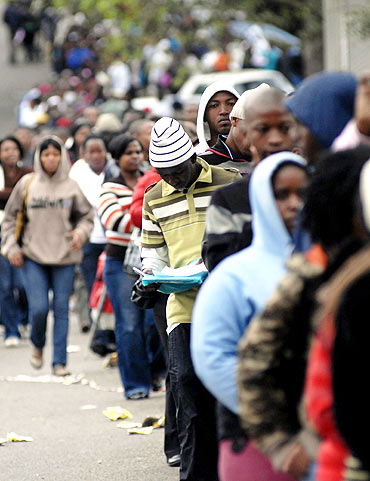 The number of jobless people reached nearly 212 million in 2009 worldwide, following an unprecedented increase of 34 million compared to 2007, due to the global crisis.

The number of unemployed youth worldwide increased by 10.2 million in 2009 compared to 2007, the largest rise since 1991, according to International Labour Office's annual study, Global Employment Trends.

The report also says that 633 million workers and their families were living on less than $1.25 per day in 2008, with as many as 215 million additional workers living on the margin and at risk of falling into poverty in 2009.

Based on International Monetary Fund economic forecasts, the ILO estimates that global unemployment is likely to remain high through 2010.

In the developed economies and the European Union, unemployment is projected to increase by an additional 3 million people in 2010, while it will stabilise at present levels, or decline only slightly, in other regions.

The report says that coordinated stimulus measures have averted a far greater social and economic catastrophe; yet millions of women and men around the world are still without a job, unemployment benefits or any viable form of social protection. further. . . 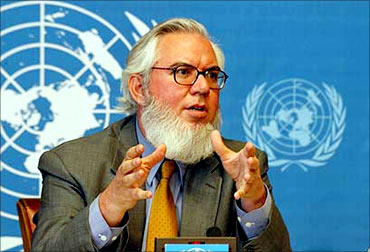 "As the World Economic Forum gathers at Davos, it is clear that avoiding a jobless recovery is the political priority of today" said ILO Director-General Juan Somavia.

"We need the same policy decisiveness that saved banks now applied to save and create jobs and livelihoods of people. This can be done through strong convergence of public policies and private investment".
"Each year, the global labour market has expanded by 45 million people therefore recovery measures must target job creation for young men and women entering the labour market for the first time," he added.

The ILO report says that it is urgent to establish wide coverage of basic social protection schemes to cushion the poor against the devastating effects of sharp fluctuations in economic activity. further. . . 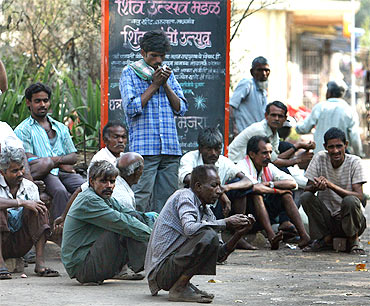 Image: Daily wage workers wait for employment on a street side at an industrial area in Mumbai.
Photographs: Arko Datta/Reuters
Some of the key findings are:

However it varied widely by region, ranging from 4.4 per cent in East Asia to more than 10 per cent in Central and South-Eastern Europe (non-EU) and Commonwealth of Independent States (CSEE & CIS) as well as in North Africa.

The global youth unemployment rate rose by 1.6 percentage points to reach 13.4 per cent in 2009 relative to 2007. This represents the largest increase since at least 1991, the earliest year for which global estimates are available.

The overall impact of the economic crisis on women and men is far more important than the differences in impact between these groups. further. . . 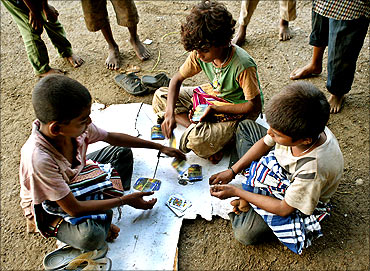 Preliminary estimates of growth in labour productivity, measured as output per worker, indicate that productivity levels fell in all regions, except East Asia, South Asia and North Africa.

The largest decline in output per worker occurred in Central and South-Eastern Europe (non- EU) & CIS, - 4.7 per cent, thus reversing part of the gains that were made in the first half of the decade.

As a result of declining output per worker, working conditions are deteriorating especially in regions where labour productivity was already low preceding the economic crisis, such as in Sub-Saharan Africa.

To address these issues, the ILO constituents which represent the "real economy" have agreed a Global Jobs Pact that contains a balanced set of tried and tested measures to promote a robust response to the employment challenge by focusing on accelerated employment generation, sustainable social protection systems, respect for labour standards, and strengthening social dialogue.

The Pact has received strong backing from the G20 heads of state and from the UN General Assembly. Rethinking policies is essential because we will not get out of the crisis by applying the same policies that lead to the crisis in the first place. Click NEXT to check out the regional outlook on jobs... 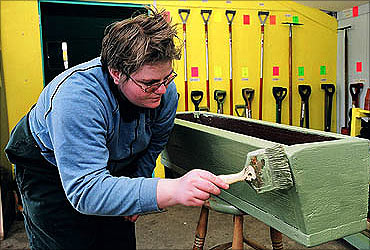 The number of unemployed in the region is estimated to have surged by more than 13.7 million between 2007 and 2009, with an increase of nearly 12 million unemployed in 2009 alone. Employment in the industrial sectors has suffered more than employment in agriculture or services.

Overall, despite comprising less than 16 per cent of the global workforce, the developed economies and European Union region accounted for more than 40 per cent of the increase in global unemployment since 2007.

Unemployment in the Developed Economies and European Union is expected to remain elevated, with a projected increase in the regional unemployment rate to 8.9 per cent in 2010. further. . . 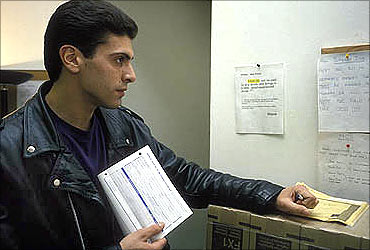 Image: A man with a job application in New York.
Photographs: Courtesy: ILO

Between 2008 and 2009, the largest increases in unemployment rates by region occurred in the developed economies and the European Union, which saw an increase of 2.4 percentage points, in Central and South-Eastern Europe (non-EU) & CIS, 2.0 percentage points, and in Latin America and the Caribbean (1.2 points).

Similarly, these three regions account for more than two-thirds of the increase in the global number of unemployed in 2009, despite only accounting for 30 per cent of the global labour force.

The Central and South-Eastern Europe (non-EU) and Commonwealth of Independent States (CSEE & CIS) experienced the most severe shock in terms of economic growth of all regions in 2009, leading to a 2.0 percentage point increase in the unemployment rate, from 8.3 per cent in 2007 to an estimated 10.3 per cent in 2009.

The current outlook is for a slight decrease of the unemployment rate down to 10.1 per cent.
Other regions saw more limited increases in unemployment rates (0.5 points or less). further. . . 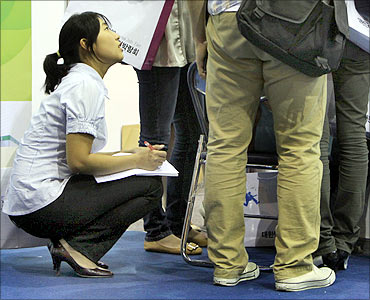 Image: A job seeker fills in her curriculum vitae for an interview at the Korea Job Fair in Seoul.
Photographs: Lee Jae-Won/Reuters.

A rapid improvement in the Chinese domestic market, as well as the positive spill-over effects to neighbouring countries, led to an improvement in the economic and labour market figures for the region. The region's unemployment rate is projected to decline slightly to 4.3 per cent in 2010.

The South-East Asia and the Pacific region includes a number of economies that are highly dependent upon foreign trade and investment flows. 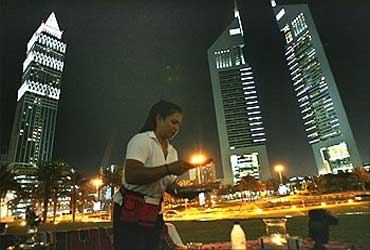 The Middle East's regional unemployment rate has not risen substantially over the 2007-2009 period and is expected to remain relatively unchanged in 2010, at around 9.3 per cent.

However, with nearly 23 per cent of workers in the region living with their families on less than $2 a day, the impact of the crisis should also be seen in terms of increased vulnerable employment: any reduction in employment quality could also lead to increased poverty. further. . . 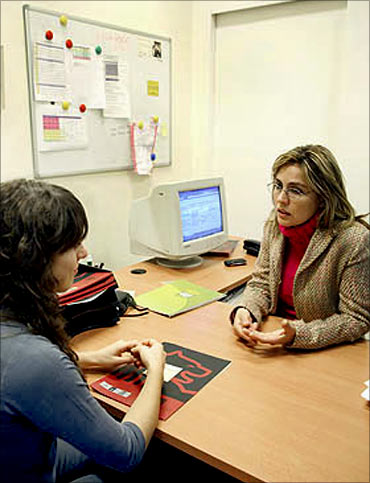 In Latin America and the Caribbean, the unemployment rate is estimated to have risen from 7 per cent in 2008 to 8.2 per cent in 2009), amounting to 4 million additional jobless in 2009.

Current estimates also indicate that the share of workers in extreme poverty ranged from 7.0 to 9.9 per cent in 2009, an increase of up to 3.3 percentage points from 2008.

In 2010, unemployment is expected to decrease slightly to around 8.0 per cent, reflecting the better outlook towards the end of 2009. further. . . 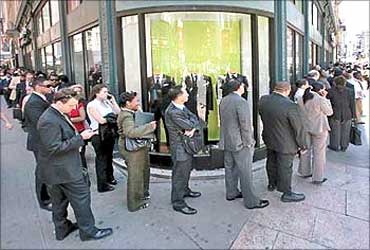 Overall, the weak conditions of labour markets prior to the crisis are likely to make the impact of reduced economic growth more severe, and the region may well need a long period to recover.

In sub-Saharan Africa, the unemployment rate is estimated to have risen to 8.2 per cent in 2009 and is likely to show very little change between 2009 and 2010.

The limited increase is not reflective of the true impact of the crisis in Sub-Saharan Africa, and should be seen in conjunction with indicators such as vulnerable employment and working poverty.