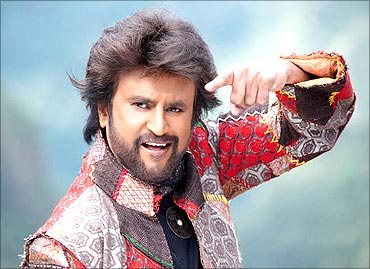 In sectors ranging from healthcare and energy to consumer goods and high-tech companies are learning to leverage the benefits of what we call polycentric innovation. These firms are harnessing and networking globally distributed talent, ideas, and creativity to co-develop radically-new products, services, processes, and even business models.

Today, we notice a similar collaborative phenomenon arising in the creative sector and, in particular, the film industry.

Indeed, visionary media companies are starting to harness and integrate globally distributed creativity into a coherent and synergistic innovation network. Interestingly, this polycentric innovation model, which extends far beyond superficial Bollywood/Hollywood alliances or mere backend collaboration, is being pioneered by companies from... India.

A larger than life emanation of this Big Bang of cross-border creativity and collaboration is Endhiran, Asia's most expensive film, which is released on October 1.

Produced by Chennai-based Sun Pictures and globally distributed by HBO, Endhiran is the collective output of a truly international crew. Not only does this sci-fi thriller feature Bollywood-style songs by Oscar-winner A R Rahman (Slumdog Millionaire) and Kung-fu-style fight scenes choreographed by Hong Kong legend Yuen Woo-ping, it also boasts mind-boggling animation and special effects done by Stan Winston Studio (of Terminator and Jurassic Park fame), and eye-popping costume design by Mary E Vogt (who worked on The Matrix and Men in Black).

Endhiran is a creative embodiment of polycentric innovation, cleverly blending Eastern talent with Western expertise to co-create a seamless viewing experience that no single region could have concocted on its own. 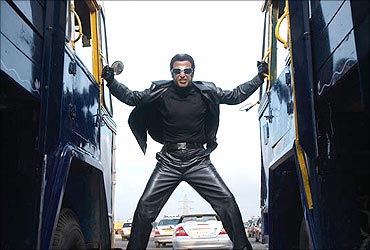 Image: Creative work on Endhiran was done in the West

Endhiran lends evidence to the fact that the monocentric film industry of the 20th century where all the creative work (concept development, post production, 3D) was done in the West is shifting to a polycentric world of the 21st century where new innovation hubs are emerging in India, Argentina, China and even New Zealand (remember The Lord of the Rings?).

The creative workers in these emerging hubs augment the capabilities of their peers in established hubs in the US and European hubs by offering complementary skills, expertise, and mindset as well as cost efficiencies and an international esthetic.

Looking at the larger picture, Amit Khanna, CEO of Reliance Big Entertainment, sees an equilibrium emerging. "In the new networked world everything from money to skills are becoming fungible. The onus is on individuals and companies to work out the best equation. Obviously, India with its population of 1.1 billion and an economy growing at 9% offers attractive opportunities (for global media players)," Khanna points out.

In the emerging global innovation networks, Producer/Director Rohan Sippy, who produced From Chandni Chowk to China, finds great complementarity between the organisational skills of the Western world and the fluid and improvisational creativity in the East. 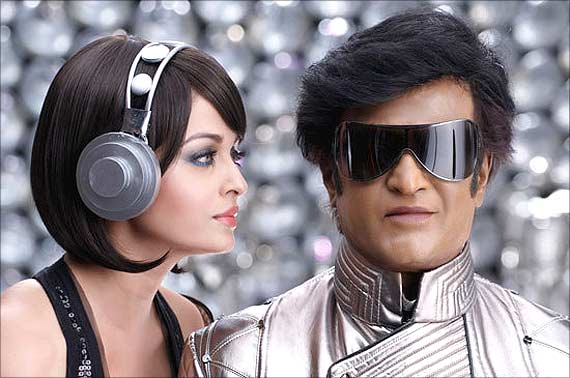 "What's interesting beyond the obvious things like access to our Western partners' international pipelines," Sippy observes, "is that they also have international management talent that is very seasoned, with decades of experience. Because most Indian production companies are so young, very few have solid organisational skills. So we can learn and grow quickly by leveraging the nuanced feedback (of international co-producers)".

It's worth noting that Fox Star also produced and distributed globally My Name is Khan, which has been screened in over 62 countries, and distributed last year's global megahit Slumdog Millionaire.

The new polycentric mindset in the film industry is also enabled by the rapidly dropping cost of global communication, which has made real-time collaboration among creative artists across borders seamless.

For instance, a director sitting in Mumbai, India can simultaneously review and even modify a film clip with a production designer in Hollywood via a shared digital asset management system.

This is not to say that there is no turbulence in this cross-regional flow of knowledge -- but these 'creative differences' enable teams on both sides of the globe to better learn from each other.

Amit Khanna notes that while differences between global hubs do emerge during co-creation processes, forward-looking enterprises must make the complementarity of skill sets available across regions the new foundation of their global competitiveness.

"Different work cultures and expectations are often the most important hurdles in trans-national trade. Yet, at Reliance ADAG we constantly strive to synergise our strengths and those of our global partners to generate optimum value for all stakeholders," Khanna explains. 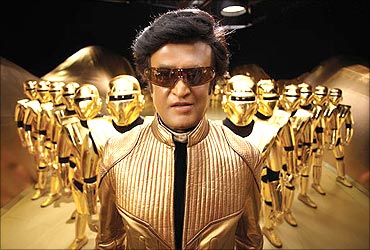 Image: Parts of Endhiran were shot in Peru, at the ruins of Machu Picchu

The race has already begun in the global media industry as to who will most effectively build these global innovation networks.

Seasoned production houses like Disney and Pixar have been leveraging global talent for years but primarily for the execution of animation with less emphasis on concept development and design work.

Several new players, however, are now emerging from India who are practicing true polycentric innovation. Here are three noteworthy contenders: 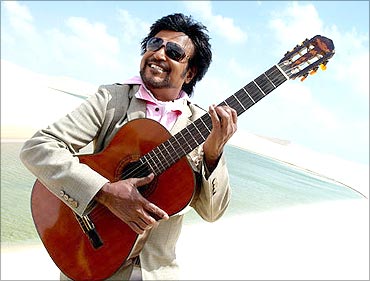 Image: Rajnikanth and Endhiran may pave the wave for an Indian wave in world cinema

The race among these players -- and others yet to emerge --- is far from over, but we can safely make two predictions:

1. By 2020, the global creative industry will be organised, and operate, as polycentric innovation networks in which all hubs operate in parity and creative ideas seamlessly flow from one hub to another -- very similar to how the high-tech sector operates today.

2. Several of these networks will be operated by non-Western firms, including many Indian entities.

The future of the creative sector lies in sharing and blending not just capital but also talent and ideas across borders.

While the playbook for polycentric innovation in the global film industry is still being scripted it's clear that Indians will significantly contribute to writing the new rules.

Dr Simone Ahuja is the Principal and Founder of Blood Orange Media, a cross border mulitimedia production company. Navi Radjou is Executive Director of the Centre for India & Global Business at Judge Business School at the University of Cambridge. This op-ed is adapted from an article published by the authors on the Harvard Business Review Web site.