Innovative India: At 14, he made a folding bicycle! 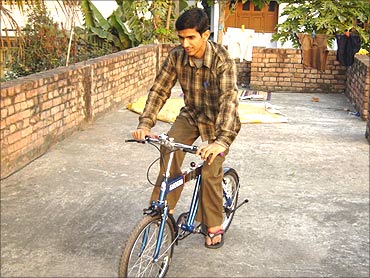 Image: Sandeep with his bicycle.
Manu A B in Mumbai

Sandeep Kumar has done the incredible. Despite being physically challenged, he built a folding bicycle, when he was just 14 years old.

Today, he no longer needs to worry about standing in the long queues at a bus stop or get trampled by others. He can carry the bicycle in his bag wherever he goes.

A victim of polio, Sandeep went through plenty of hardships during his younger days. But he never gave up hope. "There is nothing called 'impossible' in this world. If a person really wants to do something, nothing can stop him," says a confident Sandeep.

"I would like to make modified versions of the cycle to help those who are physically challenged and also those who travel to work everyday without proper public transport. They can easily carry the cycle and assemble it in just 30 seconds," says 26-year old Sandeep.

Click NEXT to read how Sandeep Kumar turned into an innovator and how he plans to solve the power crisis in India . . . 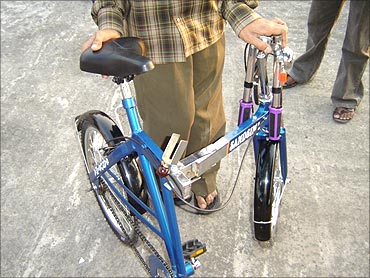 Image: Folding from the centre.

Just like every other innovation, it was dire necessity that prompted Sandeep to think of an easier way of travelling. Being physically challenged, he couldn't jostle for a space in the crowded buses while going to school or elsewhere.

He decided to develop a bicycle which he could use when needed or could be put into a bag and carried when he had to walk. But no one was willing to help him. It was his sister who instilled confidence in him and offered him money to carry out his experiments. 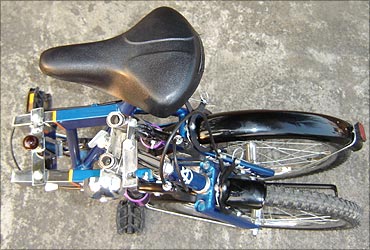 His sister, Sima, has been his biggest support. "She always said that I should not stop dreaming, I should focus on what I want to do and I will succeed," he says.

Money was however a big constraint. So he decided to modify an old cycle, with some new additional parts to suit his requirements. He assembled a number of lockable hinges that enables the cycle to be folded into a compact size to fit inside a 24-inch bag. 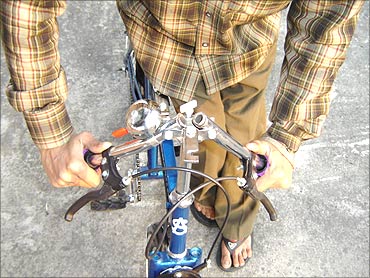 The making of the folding cycle He spent many Sundays and holidays at RA engineering workshop in Muzaffarpur making this cycle.

"It took me fourteen months of hard work to develop the first prototype in 1998. With an old bicycle, I customised its frame and other parts. I had to spend Rs 1,800 to make the first prototype, which was a huge amount at that time," Sandeep says.

"As I was studying in class IX at that time, I could work on this only during the holidays. It took me 14 months to make the first prototype of the cycle. Finally in 1998, it became a reality. I got a new lease of life as the cycle helped me move around freely," says Sandeep. 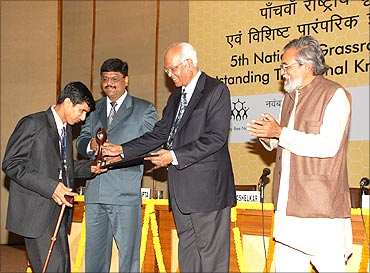 Sandeep tried contacting government officials in Patna to show them this cycle but no one was interested. "There is total apathy towards the poor and what the poor do. I have so many ideas but I wonder if I will ever be able to put anything to practice as I do not have the money or resources to do it," says Sandeep.

After local authorities did not pay attention to his innovation, he wrote to the then President A P J Abdul Kalam about his innovations. He got a reply from the Rashtrapati Bhavan to get in touch with the National Innovation Foundation. 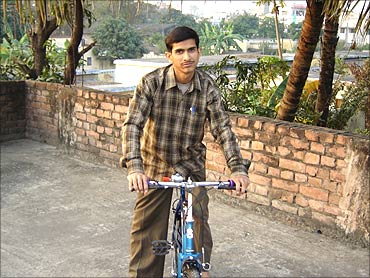 This was a turning point in Sandeep's life. With NIF's support, he could make a modified version of the cycle. A hard worker, Sandeep made certain that he completed his graduation in 2006 in electronics. Though he is passionate about electronics, he ended up getting a job in the postal department.

Getting a job was his topmost priority. "I lost my brother so now I have the additional responsibility of taking care of my brother's family as well. I have to take care of 10 members. I have not been able to save anything to pursue my experiments, but I hope someday I will get the chance," he says. 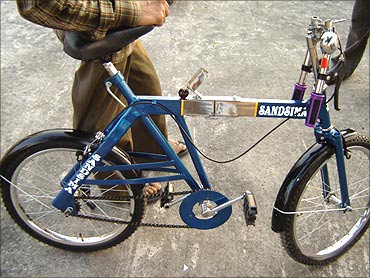 After work, he comes back home and makes choke for tubelights to earn more money. After he got the job, Sandeep went to meet his teacher.

"My teacher said this is not a job for your calibre but this is the first step to make you independent. You have miles to go, he told me," says Sandeep. Sometimes, he remains awake through the night, thinking about new ideas that can transform lives. 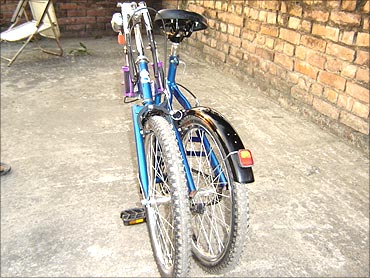 The design of Sandeep's bicycle differs from the ones that exist. It is simple and affordable and is priced at Rs 3,000. The cycle can be folded in just 30 seconds.

The bicycle has a 24-inch long main frame made of iron. It is easy to ride and runs at a good speed. The height can be adjusted too. The weight of this bicycle is only 13 kg. There is no provision for carrying goods but Sandeep says that a carrier can be used on the bicycle. He has filed patent for the cycle.

"The cost can be reduced to Rs 2,000 if the cycle is manufactured by a company. But no company has come forward to make this bicycle on a commercial scale. The name of the cycle is the combination of his and his sister's name (sandeep and Sima). All my life, I have wanted to make new things, which can benefit the poor," says Sandeep. 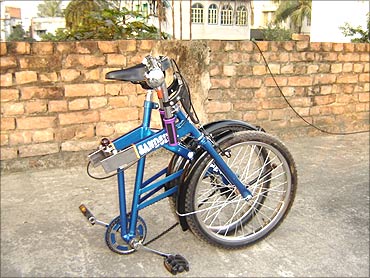 People used to call him an engineer during his childhood. He could repair almost any device that wasn't working. He made a small clock when he was just 6 years old.

His father could not afford to educate him so he was sent to his sister's place in Muzaffarpur. His life changed for the better after the resettlement.

He had an innate knack to fix things. One of the biggest problems that needs an urgent solution in our country is the power crisis.

"My dream is to light up all the villages in India. My idea is to make electricity from human power. With the device I am planning to build, I am confident that we can make 5-6 lights in every house work if each individual in the house spends 10 minutes doing exercise. So if there are four family members, 40 minutes of charging would be sufficient to keep the lights on for at least 8 hours," says Sandeep who does not wish to disclose further details as he is working on the prototype, which he will submit to the National Innovation Foundation by December. 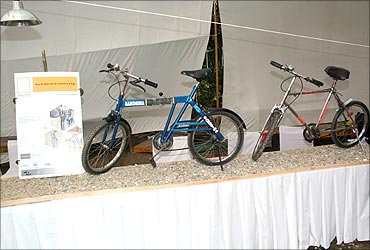 "I do not know how I will get the money and resources to carry out this ambitious plan. But I do not need money to think. The thinking process is always on. I believe there is no limit to ideas or innovations if one has the right kind of resources to build on these ideas," Sandeep says.

"My biggest dream is to win the Nobel Prize. You may think it is crazy but I believe it is important to have a good vision in life. Innovation must always be directed at making life easier and more comfortable for others."

"Electrifying villages with human power will remain my biggest mission. I will continue to do my experiments in the hope that someday I can make a real difference in the lives of millions of Indians," says Sandeep.