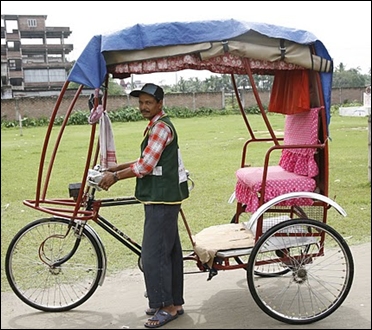 Rickshaw-puller Haripada Das is a happy man these days driving his own specially-designed rickshaw which is lighter and spacious and also covers his head enabling him to drive under scorching sun or in rain.

The rickshaw, designed by the Indian Institute of Technology, Guwahati, has proved a boon for Das, who till 2007 pulled a hired rickshaw paying Rs 25 as rent per day.

He is one of 300 such rickshaw-pullers in Agartala and many others in cities elsewhere in India, including Delhi and Lucknow, and their number is increasing.

"After I got the new vehicle from the Rickshaw Bank, I paid the same amount of Rs 25 to the bank every day and after one year I became the owner of the vehicle," Das said. 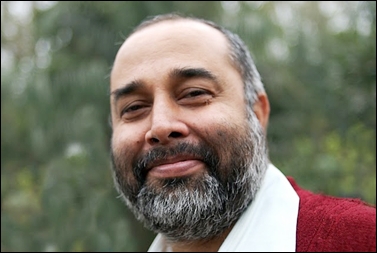 The new vehicle, Das says, is much easier to drive because it is at least 20 per cent lighter than other three- wheeler rickshaws.

The rickshaw, imaginatively named 'Deep Bahan', is the brain child of Dr Pradip Sarmah, a veterinarian surgeon turned social activist, who contacted the IIT, Guwahati with his idea.

Guwahati-based Sarmah, who visited the city recently, said that he was pained by the penury of the rickshaw-pullers who had to give away 20 per cent of their hard-earned daily wages to the rickshaw-owners. 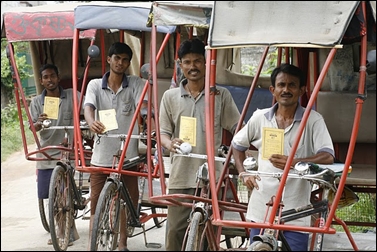 "In 2002, I gathered from a rickshaw-puller that his daily income averaged Rs 100 out of which Rs 25 had to be paid to rickshaw-owners by way of rent and that he has been hiring the rickshaw for the last 16 years," he said.

So, the amount he paid to the owner was at least 16 times more than the real cost of the vehicle," Sarmah said. 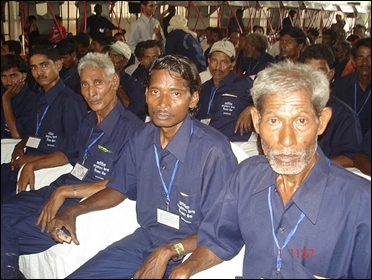 Struck by his predicament, the ex-vet first tried to attract institutional finance but insurance companies and banks refused to finance on the ground that rickshaw-pullers were migrants having no permanent address of their own.

Moreover, they do not have any permanent asset which could be treated as collateral for loans, Sarmah said. 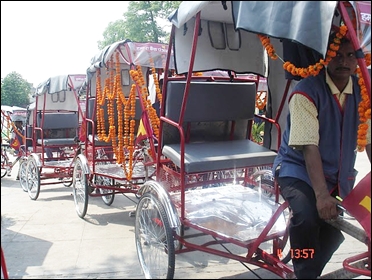 He then contacted his engineer friends in IIT, Guwahati and requested them to remodel the conventional rickshaw in a way that space was created to advertise products and which would be technologically sound too.

His friends did not disappoint and within six months they showed him a prototype which he okayed. Sarmah then set up a rickshaw-manufacturing workshop and in November that year, 80 rickshaws hit the roads of Guwahati. 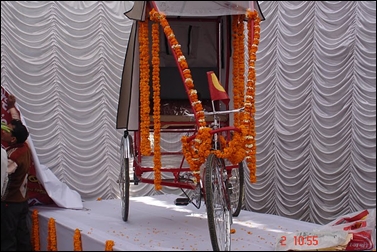 The Rickshaw Bank has now started programmes in many parts of the country including Guwahati, Agartala, Chennai, Surat, Lucknow, Varanasi, Allahabad and Chandni Chowk areas of Delhi.

The Rickshaw Bank primarily provides financing so that rickshaw drivers can own their vehicle. Rather than providing cash loans to drivers, the bank directly lends newly manufactured rickshaws.

The asset remains under the Rickshaw Bank's legal ownership, providing security for the loan. 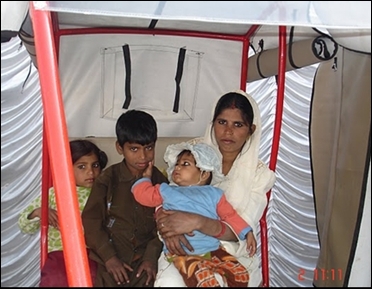 Legal title is transferred after full repayment. Sarmah said an estimated eight million rickshaw-pullers in the country could thus enhance their income.

To their aid the national banks have also come forward with loans and even insurance companies are eager to provide comprehensive coverage.

Sarmah said people in the developed countries were now increasingly rooting for environment-friendly rickshaws as a short-distance transport and gave example of Copenhagen which has dedicated lanes for bicycles or rickshaws.

The Boston-based Massachusetts Institute of Technology has offered to give the 'Deep Bahan' a design makeover to make it still cheaper and easier to drive.