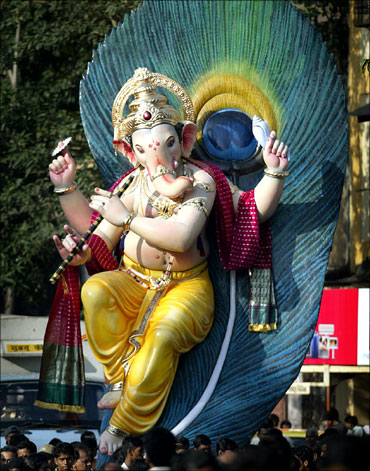 Two cities, two festivals -- a similar madness. The 11-day Ganeshotsav in Mumbai, which began on Saturday, and the five-day Durga Puja in Kolkata (October 13-17) are not just about piety.

They are a carnival in which the two cities come alive and out into the streets -- people dressed in new finery throng the large customised marquees that house the idols, propitiating the deity with flowers, fruits and sweets, and then sampling street-side fare or buying knick-knacks from the stalls nearby.

But it's not all merrymaking. The festivals are big business, with serious money for the many small and big enterprises associated with them -- the decorators who build the pandals, the flower and fruit sellers, manufacturers of sweets, and so on.

Organisers of the festival in Mumbai estimate that Rs  1,200-1,400* crore (Rs 12-14 billion) worth of Ganpati-related business will be conducted this year; last year it was around Rs  800 crore (Rs 8 billion), so there's been a significant rise. 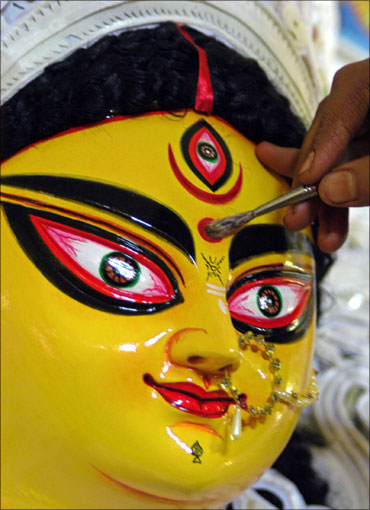 As for the entire state of Maharashtra, they say it would be as much as $1 billion.

Similar figures are not available for the Durga Puja in Kolkata. The only number you have is Rs  130 crore (Rs 1.30 billion), arrived at by multiplying Rs  10 lakh (Rs 1 million) -- which puja organisers say is the average puja budget this year -- by 1,300 -- the number of pujas.

This is modest compared to Mumbai, and one reason for that could be that in Mumbai, Ganeshotsav is celebrated at the household level, whereas in Kolkata it is mostly a community -- sarbajanin as it is called -- affair, with the participation of general people confined to visiting the big pujas.

Lalbaugcha Raja, one of the biggest and most popular mandals in Mumbai, has a budget of around Rs  4 crore (Rs 40 million) this year. Besides decorating the area where the deity sits, the mandal is also constructing a separate entrance for people who make special offerings, and a 65,000 sq ft temporary air conditioned shed to accommodate over 20,000 devotees who come in daily. 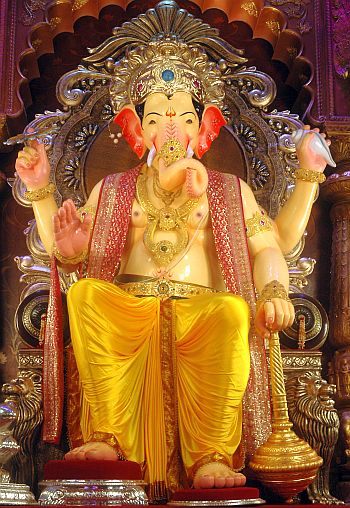 "Then there is the cost of breakfast for devotees," says Sunil Joshi, committee member and ex-president of Lalbaugcha Raja Ganesh Mandal.

The Lalbaug Ganesh idol has over 10 kg of gold on it. Last year the mandal collected Rs  17 crore (Rs 170 million) in offerings, of which Rs  2-2.5 crore (Rs 20-25 million) came from auctioning some of the gold offered to the deity. The mandal has bought insurance cover of Rs  3 crore (Rs 30 million) for the mandap and Rs  2 crore (Rs 20 million) for visitors. 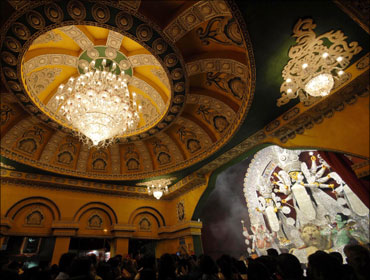 Budgets are large in Kolkata as well. Among the big, crowd-puller pujas, 80-100 of them have budgets of anywhere over Rs  30 lakh.

Ekdalia Evergreen in south Kolkata, one of the big spenders, has a combined budget of Rs  40 lakh (Rs 4 million) this year, up 25 per cent from 2009, while at Santosh Mitra Square Durga Puja in north Kolkata, it is even higher -- above Rs  60 lakh (Rs 6 million).

"The main expenditures are lighting, the pandal itself, the idol and the flowers," says Gautam Basu, joint general secretary of Ekdalia Evergreen organising committee. 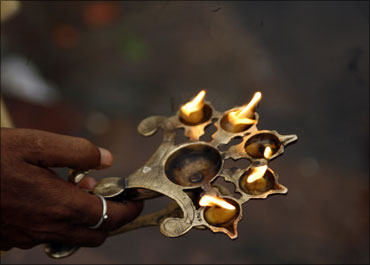 In Mumbai, corporate sponsorship forms a minuscule segment of the budget of mandals -- just 5 per cent, according to Dinesh Pai, joint convenor, GSB Seva Mandal.

In Kolkata, on the other hand, at least 50-60 per cent of the funds comes from corporates -- in the large community Durga Puja at any rate.

For a large puja like the Santosh Mitra Square, as much as 80 per cent of the money come from corporates. "Very little of our requirement will come from chanda donations from the para [locality]," says Congress leader and Puja committee member Pradeep Ghosh. 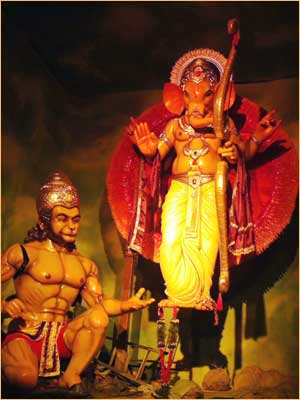 Additionally, Puja committees compile a 'souvenir', a booklet with advertisements sponsored by small and medium businesses. At a large puja like Ekdalia Evergreen, souvenirs bring in about 20 per cent of the funding.

Earlier, and even now in the traditional wadis and housing complexes in Mumbai, local volunteers decorated the mandap. Now a few rich mandals rope in well-known artists and Bollywood set designers. These are elaborate, depicting famous Hindu temples or tourist destinations, national achievements in sports, science or technology, and so on.

Some mandals supported by political parties have more contemporary, contentious themes -- rotting food grains, corruption, the widening gap between rich and poor, Naxalism and so on. 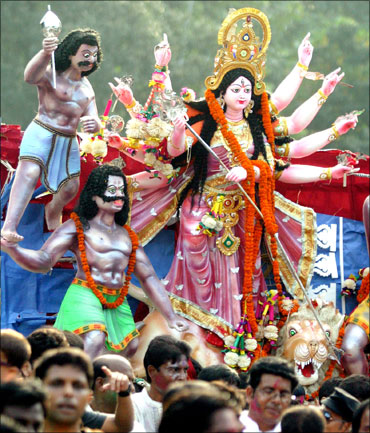 Kolkata, too, is known for its fancy pandals. In fact, Tapati Guha-Thakurta, professor of history at the city-based Centre for Studies in Social Sciences, who has extensively researched the evolution of the festival, says the "emergence of a new wave of art production with professional artists and designers coordinating on a contract basis" is one of the factors defining the Durga Pujas today.

Both the Ganeshotsav and Durga Puja are a bonanza for advertisers. Dunlop India, for instance, has earmarked Rs  30 lakh this year, up 50 per cent from last year, to buy about 100 hoardings at 15 big pujas located at busy traffic junctions such as Park Circus. 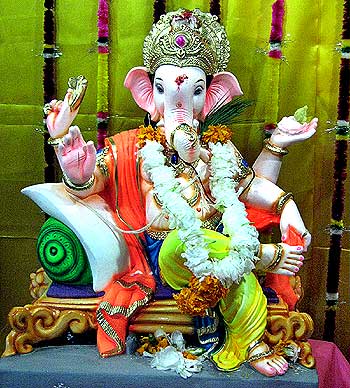 A few also find innovative ways to reach out -- this year, Bharti Airtel will provide 25 of the largest pujas across Kolkata and South 24 Parganas with wireless protocol and SPP handsets for security purposes.

Uninor, which is trying to register a strong footprint among the city's mobile phone users, will have, besides the usual promotional banners and stalls, initiatives like a Metro guide map and a Keep the Ganges Clean project post the immersion campaign.

"The first will be a competition, which will award the best puja bhog across the city. The other is a bhog distribution plan wherein Emami volunteers will give out bhog from colony and club pujas," says V S Agarwal, director, Emami. 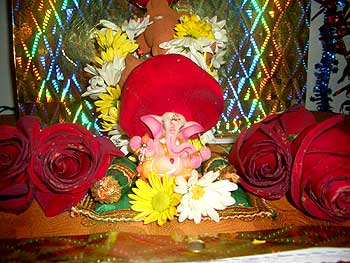 The average sponsor at Ekdalia Evergreen doles out Rs  2 lakh, to get space on the back of stalls and banners.

"Revenue from advertisements and displays will not be less than Rs  400-500 crore (Rs 4-5 billion)," predicts Jitendra Awad, NCP legislator and member of the Coordination Committee of Mumbai Ganesh Festival.

"Inflation has not impacted the advertisement flows. In fact it has gone up," he adds. Sunil Mantri, president of the Maharashtra Chamber of Housing Industry explains, "I can tell you about the outgo of the real estate industry towards advertisements. It will not be less than Rs  100 crore (Rs 1 billion). Some of them also launch sales and expect registrations."