Of financial bubbles and risk management

While the world was still recovering from the US financial crisis, the financial markets were recently rattled by Dubai's debt crisis. Let's understand what such events of financial enormity have to teach. 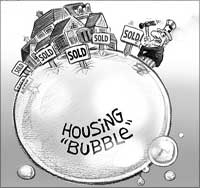 In order to curb the fears of recession, US Federal Reserve had kept interest rates at the lowest levels to fuel consumption demand. This led to the increase in housing demand as loans were available in bulk and cheap.

The ownership ratio jumped from 64 per cent in 1994 to 69.2 per cent in 2004. On the supply front, lower interest rates gave an opportunity to banks for higher risk taking.

They started to give out home loans to even those with bad/ poor credit history. This led to the development of the subprime market.

As demand for housing loans increased from this market, the average difference in mortgage interest rates between subprime and prime mortgages declined from 2.8 per cent in 2001, to 1.3 per cent in 2007.

Soon greed became the big cause of a bubble.

The banks changed their roles from mortgage holders to loan collectors which were then sold, to the investment banks and others, thus earning them a fee in the process.

The banks in the process ignored the quality of the borrowers and started lending to anyone and everyone. Sources indicate that nearly 11 per cent of the borrowers had negative or zero equity (March 2008).

These bad loans were further sliced and diced into many tranches and sold to hedge funds and investment banks. As the property prices continued to move up, the bubble only got bigger.

Things worsened when the US Fed raised the interest rates to 5.25 per cent to curb inflation. This led to higher mortgage payments, which in turn increased the default rates, resulting in rising foreclosures and falling housing prices.

As the housing prices fell, the exotic financial instruments lost their value. The increasing redemption pressure caused double trouble for the hedge funds and investment banks as along with the problem of rising defaults, they also faced increasing losses/write offs on their assets.

Many top banks went bust: On account of the above said problems, several major financial institutions that failed, were either bailed-out by governments, or merged (voluntarily or otherwise) during the crisis. The five largest US investment banks, with combined liabilities or debts of $4 trillion, either went bankrupt (Lehman Brothers), were taken over by other companies (Bear Stearns and Merrill Lynch), or were bailed-out by the US government (Goldman Sachs and Morgan Stanley) during 2008.

Dozens of US banks received funds that were collectively worth $700 billion for a bailout. With the crisis deepening, Fed had to step in to support the economy by yet again reducing the interest rates to 2 per cent from 5.25 per cent.

In the last week of November, the Dubai government asked its creditors to freeze repayment of debt for its two flagship firms - Dubai World and real estate developer Nakheel Dubai World.

It has $60 billion in liabilities and will seek a six-month standstill on its debts with all lenders. Further, Nakheel also reported losses of more than $3.6 billion for the first half of 2009. This comes as an added shock as the company does not have the resources to pay its debt.

Dubai World is negotiating with its creditors for a restructuring of $26 billion worth of debts, including $6 billion in debts owed by Nakheel. As per reports, more than half of the construction projects in the United Arab Emirates, worth $582 billion, have been put on hold.

Dubai property prices had doubled between 2005 and 2008. The government had targeted an annual GDP growth of 11 per cent to 2015, which is higher than China. The dream of converting a dessert into the world class financial and tourist hub has proven very expensive. Over investment to convert every grain of sand into a real estate project has caused a desert storm.

According to Mark Mobius, global investor and emerging markets fund manager, some parts of India and China could become 'next Dubai'. In his interview to Bloomberg, he indicated that considering the liquidity in the two Asian nations, there could be isolated pockets of disaster on account of over-spending and over-leveraging.

While he mentioned that though the Dubai like situation would not happen tomorrow, he did say the chances of an event like that happening are very high considering the kind of money supply that's coming in and with the IPO activity that's underway.

In China, there is an investment happening on a massive scale. In spite of less demand, China is making more factories and malls. As per the observers, many Chinese skyscrapers and malls are empty, with vacancy rates as high as 75 per cent. Overinvestment is not always good.

In India too, during FY09 on account of global slowdown, the residential prices corrected by over 25 per cent.  As per the industry, the prices in India are expected to decline further in the range of 5 to 15 per cent.

Property prices had increased sharply over the past six to seven years, rising 3.4 times in normal term (quoted price) and 2.5 times in real term (transaction price) over 2001 prices.

Lessons to be learnt

Several global investment experts are of the view that more such bubbles are waiting to burst! Hence, as an investor one should make sure that you limit the amount of risk you are willing to shoulder.

Investors should choose to cut back on risk. While you may miss some upside in the present, in the long term, you would definitely be a winner. The assumption that what is going up will always go up further, or the assumption that the bubble will never burst is very dangerous.

Also free money will not always keep flowing. One day the era of free money would end. Hence one must always be careful and reduce risk in the portfolio. The quality in the portfolio must be kept in mind even though it means the returns are going to be more modest in the short term.

BankBazaar.com is an online marketplace where you can instantly get loan rate quotes, compare and apply online for your personal loan, home loan and credit card needs from India's leading banks and NBFCs.
Copyright 2022 www.BankBazaar.com. All rights reserved.
Related News: Dubai, US Federal Reserve, US Fed, China, Nakheel
Print this article