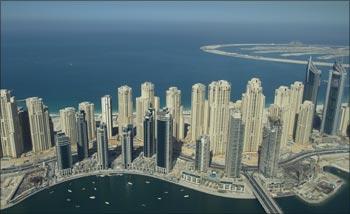 Image: A view of Jumeirah Beach Residence in Dubai, with the Palm Island Jumeirah in the background.
Photographs: Steve Crisp/Reuters Mohan Guruswamy

There is a delicious irony to the Dubai bust. From November 20-22 this year it played host to the World Economic Forum's Summit on the Global Agenda and where the so-called Dubai Model was lauded and touted as a recipe for emulation by others.

The WEF meeting in Dubai was supposed to do for it what the summer Olympics last year did for China!

While the Olympics were real as were China's many achievements, the Dubai Model and the WEF, both, have a fraudulent ring to them.

The WEF, despite its official sounding name, is really a Swiss NGO started and run by Klaus Schwab, a former business management professor at a small time college who managed to parlay an official sounding name and some plain old huckstering into a global movement propagating a free wheeling capitalism and by fostering boundless optimism on the ability of private sector managers to solve the world's problems.

Many of the WEF's early stars -- like Percy Barnevik of ABB -- have fallen by the wayside after being exposed as highly paid frauds with till-dipping proclivities, but the WEF has just kept growing by keeping one step ahead. As it did in Dubai last month.

Today the fading and tattered posters of Sheikh Mohammed bin Rashid al-Makhtoum and airports choked with departing workers and managers tell the story of the economic mirage in the Arabian desert. Till the money ran dry, Dubai's $582 billion construction boom was financed by lenders flush with oil money and safe haven seeking black money. (How many Indian leaders have lost their money in Dubai is anybody's guess. One former chief minister is supposed to have taken a particularly bad beating?)

With the United States's trade and budgetary deficits burdened economy finally giving way, the flow of money tightened, first into a trickle and then into a dribble, and the noose tightened around Dubai's neck.

Finally matters came to a head over Dubai's request to reschedule $26 billion of its debt. This would have been easily accomplished if lenders had any more appetite left for debt, but Wall Street lenders were badly hemorrhaging as it is and old friends looked the other way when Dubai beseeched and went into near default.

From the very beginning Dubai was a house of cards built on the shifting desert sands of the Arabian Peninsula. The first fortunes in Dubai were made by gold smugglers like Abdul Wahab Galadhari who plied chartered dhows to India's western coasts where landing agents like Sukur Narayan Bakhia and Haji Mastan took delivery of them to satiate India's inordinate hunger for the yellow metal.

The ruling house of Dubai found a vocation in financing the purchase of gold and made its initial fortunes in it. Dubai is endowed with the regions best natural harbour and making it a safe haven for smugglers worked like magic for it.

The Galadharis today are amongst Dubai's biggest business houses and the smuggler's sons are nowadays honoured guests of the Indian Consul General's official reception to celebrate Republic Day! One former State Bank of India chairman even went to work for Abdul Wahab. Abdul Wahab had a widely known relationship with Dawood Ibrahim and the two even shared the two Dossa brothers as their bodyguards. It was Mohammed Ali Dossa's dhows, the Bismillah and Sada-al-bahar, that landed the RDX used in the 1993 Mumbai attacks.

Dubai is one of the seven trucial emirates that constitute the UAE today. While Dubai is the big name and draw to the area, it is Abu Dhabi that is the real economic powerhouse. It pumps out 95 per cent of all the oil that flows from the UAE and that makes it the world's sixth largest oil producer.

The UAE is also the richest country in Asia with a per capita income of $54,600. Abu Dhabi is reputed to have a sovereign fund that was worth close to a trillion dollars before the recent meltdown. Even after the erosion it still has a tidy sovereign fund and it is to Abu Dhabi that Dubai has now turned to for a bailout.

So far Abu Dhabi is reported to have offered a mere $10 billion to help the cash strapped Sheikh al-Makhtoum. Maybe its Sheikh Zayed bin Sultan al Nahyan wants him to get his just desserts first?

The Dubai bailout was necessitated by the financial difficulties at Dubai World described as 'Dubai's flag bearer in global investments. As a holding company it operates a highly diversified spectrum of industrial segments and plays a major role in the emirate's rapid economic growth. Its primary aim is to play the role of a growth engine that powers development both locally and internationally'.

Dubai World owns one of the largest marine terminal operators in the world, Drydocks World & Dubai Maritime City, designed to turn Dubai into a major ship-building and maritime hub; Economic Zones World which operates several free zones around the world, including Jafza and TechnoPark in Dubai; Nakheel, the property developer behind iconic projects such as The Palm Islands and The World, among others. 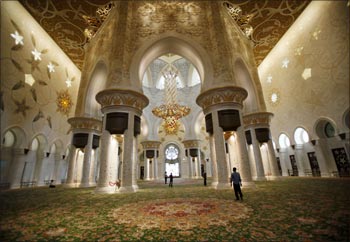 In its own words it describes its business strategy as 'driven by a combination of pragmatic acquisitions and prudent investments, designed to deliver real, measurable results to all its stakeholders. As one of the world's largest corporations, Dubai World embodies a commitment to work practices that are in harmony with corporate goals and environmental conservation and social responsibility. A strong, visionary leadership has ensured that its ideas are always innovative, ambitious and responding to the needs of sustainable development. Dubai World believes that corporate success is symbiotic. Its corporate philosophy is based on strong fundamentals, best ethical practices and integrity'.

Well, all this corporate philosophy seemed a bit barren and combined with an adverse global market things didn't seem to work too well for Dubai World.

In November this year the boom turned to bust when Nakheel went belly up with few takers and a mountain of debt. Dubai World's 'strong fundamentals' turned out to be less strong than widely believed. Unlike the USA which has a central bank that keeps printing currency to bail it out from time to time and the confidence of the world which puts its spare cash into American banks and in US currency, Dubai doesn't even have a central bank.

It is Abu Dhabi that has the central bank that issues the dirham. With close to $80 billion invested in its two real estate projects, Dubai World is now badly wounded. But it has investments in several leading corporations the world over that, in theory, can restore some liquidity.

The problem is that if it tries to improve its liquidity by selling these shares in the market it will run down their value and where the holdings are large, as in the Standard Chartered Bank or Hollywood's MGM Studios, it might even cause a run on those shares. These tremors are like to find resonance in the value of other stocks.

There is yet another problem. A few British banks such as Barclays, HSBC, Lloyds and RBS have together an exposure of just over $50 billion in Dubai. These banks, and particularly the Royal Bank of Scotland, have just taken a bit of a bath in last year's crisis and their nerves are raw. The point is that in a skittish and jumpy market anything might trigger off a crisis in confidence. 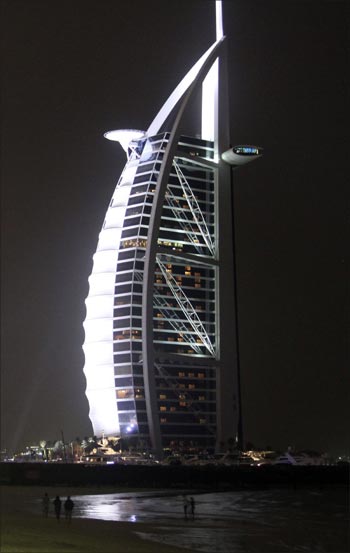 If times were normal the world economy is much too big for a mere $80-billion debt-turned-sour to have much effect on it. The trouble is that these are not normal times. The world has only just about begun to recover and it is easy to fear that the Dubai World default might be the proverbial straw on the camel's back.

On the other hand things are also perking up. India has just reported a 7.9% growth in its last quarter and with a similar growth being reported in China, the Asian giants might just power the world out of its gloom.

Nevertheless, the Dubai bust should hold a lesson for all our leaders who flock to the World Economic Forum's rather smug and gratuitous fests which celebrate the easy ways of getting rich. There is no such way.

Countries like India have to pay their dues to educate and train their people, make the investments in agriculture and infrastructure, and industrialise.

Money doesn't grow in deserts. You can only build an economy the old fashioned way. That is by saving and investing in industrialidation.

The Dubai Model is now revealed to be a mirage and one hopes that India's leaders would have drawn the appropriate lessons from it?