Lakshman Menon peeks into Too big to fail -- the inside story of how Wall Street and Washington fought to save the financial system and themselves -- written by award-winning business journalist, Andrew Ross Sorkin. 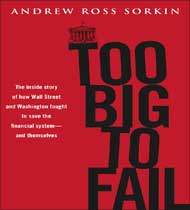 In a way, it all began on the 16th of March, 2008, when Bear Stearns, "the smallest but scrappiest of Wall Street's Big Five", fainted in the arms of JP Morgan with the US Treasury acting as matchmaker and priest. And the Federal Reserve Bank guaranteed up to "$30 billion of losses from Bear's worst assets to make the deal palatable" to JP Morgan.

The rescue plan was anathema to Congress. The Democrats regarded the bailout as the consequence of years of deregulation under the Republicans. For the Republicans, however, the marketplace was supreme; left to fend for itself, "a little blood might be spilled, but creative destruction was one of the costs of capitalism".

Summoned before a Congressional committee, Ben Bernanke, Tim Geithner and other ranking government officials were duly roasted. They carried the day, but only by defending "the Bear bailout as a once-in-a-lifetime act - not as the expression of a nascent policy".

Senator Bennings, however, demurred. He viewed the Fed rescue as socialism, adding ominously, "And what's going to happen if a Merrill or a Lehman or someone like that is next?" They would shortly find out.

In real-time, "fly on the wall" manner, Too Big To Fail recounts how the world came to the very brink of financial meltdown as one by one, like dominoes, some of the largest financial institutions either collapsed altogether (Lehman), pedigree brands were devoured (Merrill, Wachovia), brutally humbled (Citigroup) or placed on semi-permanent government life support (AIG, Fannie Mae and Freddie Mac).

As the markets on which these financial behemoths fed (or preyed?) turned against them, there was utter panic; "banks and investors fearful of being contaminated" turned off the taps. The book skims over the causes of this calamity - decades of cheap money, mounting corporate debt, the supplanting of traditional banking by financial products so complex, even Alan Greenspan confessed to being bewildered by them.

Sliced and diced, these products were sold to investors globally. And the banks "ate their own cooking". In fact, "they gorged on it, buying mountains of mortgage-backed assets from one another". It was this interconnectedness "that posed the biggest risk of all - every firm was now dependent on the others - and many didn't even know it". And didn't get it.

Even in 2007, as the subprime mortgage market unravelled, "Merrill kept its foot firmly on the gas pedal, underwriting more than $30 billion worth of CDOs (collateralised debt obligations) in the first seven months of the year alone". At a board meeting, the executives responsible for piling up these toxic assets "insisted that the firm's CDO exposure was nearly fully hedged".

Merrill's CEO congratulated them. Only Merrill's lawyer despaired, "Who the f**k are they kidding? How is this board walking away without sh*tting their pants?" Three months later, Merrill announced quarterly losses of $7.9 billion. Soon thereafter, Merrill with its famous bull logo, the very symbol of Wall Street's punchy confidence, ceased to exist as an independent firm.

Here too is Dick Fuld, Lehman's CEO, proclaiming at the start of the housing collapse, "Do we have some stuff on our books that would be tough to get rid of? Yes. Is it going to kill us? Of course not." Lehman soon became the biggest bankruptcy in history.

Even when finally American capitalism had been turned on its head and the Treasury announced the vast series of guarantees that became known as TARP (troubled asset relief programme), the full extent of the poison in the system was unquantifiable (and still is). Hank Paulson, the Treasury Secretary, debated the precise costs with his policy wonks, Neel Kashkari and Kevin Fromer. "What about $1 trillion?" Kashkari ventured. "We'll get killed," Paulson groaned.

"Okay, how about $700 billion?" "That's better than $1 trillion," Fromer replied. The book brilliantly chronicles the ruthless discarding of old alliances. With Lehman in its death throes, the Americans came up with a cynical solution - why not sell Lehman to Barclays? The British saw through the ruse and declined. Paulson was outraged, "The British had grin-f**ked us". The irony escaped him.

Goldman Sachs' president pleaded with an old hedge fund friend not to withdraw his funds from Goldman; if word got out, it could cause a run on Goldman. His friend's reply was brief: "I don't really give a sh*t; it's my money."

Today, "Wall Street... rumbles on in search of new profits". Little has changed; the regulatory structure still awaits fundamental reforms. There will continue to be firms that are too big to fail. This is not the definitive history of the financial calamity of 2008; it is too light on analysis.

It is, however, an insider's account. Sorkin, an award-winning business journalist, had unique access to many of the key players. He has skilfully used his material to turn a complex financial saga into a fascinating rollercoaster.