The Pricol and Graziono cases are extreme ones, but there has been a steady rise in the number of worker disputes, writes Shyamal Majumdar.

A week ago, Roy George, the 46-year old HR head at automotive components firm Pricol, was beaten to death in his office by iron bar-wielding workers. While the company claimed that the violence was instigated by left-wing trade union leaders linked to the Naxals, the unions blamed the attitude of the management over the past two years that led to the violence. 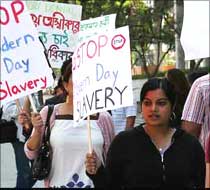 The trigger for the murder was the dismissal of 42 workers at the company's Coimbatore unit and the investigating officers have already pointed out that it was a specifically planned and systematically executed attack.

The finger of suspicion was pointed at a new union (Pricol already had five recognised unions) that preferred a confrontationist stand with the management from day one.

Some reports even said that a few of the new union members had been openly praising workers in a Chinese steel mill who threw their boss down some stairs - he died as a result - as he was managing the sale of the state-owned plant to a private company.

By some strange coincidence, the Pricol incident happened exactly a year after the CEO of Graziono Transmissioni, an Italian auto parts firm, was bludgeoned to death by scores of sacked employees in his office in Greater Noida.

That incident followed a long-running dispute between the factory's management and workers demanding better pay and permanent contracts.

Though these are extreme examples of mob violence and do not signal a broader trend, the past few months have indeed seen a steady increase in the number of labour disputes and flash strikes, the most recent examples being the pilots' strike at Air-India and Jet Airways.

According to the government data, the number of strikes in 2008 was almost double that recorded in the previous year. The extent of the problem is obviously understated as the data do not capture the labour unrest in the unorganised sector, which employs over 94 per cent of the total workforce. By all available indications, 2009 would be much worse.

The list of labour disputes has been getting longer: The three-week strike at the Pantnagar plant of Nestle after the management removed a few employees for unsatisfactory performance; the 15-day strike at the Mahindra & Mahindra utility vehicles plant at Nashik over suspension of the trade union president; the one-month strike at MRF's Tamil Nadu unit over rival unions demanding recognition; and the 20-day strike at Hyundai's plant in Tamil Nadu over recognition of the trade union, are a few high-profile examples.

There was also huge tension when Tata Motors discontinued the services of 4,000 temporary workers and Hyundai did the same for 2,000 workers - decisions which have subsequently been revoked with the automobile market showing signs of improvement.

Pricol workers had been agitating for over two years against the hiring of contract workers - a stand that was inexplicably endorsed by the Tamil Nadu government which prohibited the company from employing temporary workers in core operations and ordered it to hike wages, implicitly validating the demands of workers.

So is labour militancy back in India? That may be too strong a term to use, but the fact is that there is some kind of a fear psychosis - something that prompted Ratan Tata to shift the Nano plant out of Singur on grounds that the employees' safety was at stake. The Nano crisis also led Mukesh Ambani to say that violent protestors were creating a "fear psychosis to slow down certain projects".

Union leaders say more than the management, it's the workers who are suffering from a fear psychosis - fear of losing their jobs. There is no doubt that the fear is real. Though things have improved a bit, factory workers have been hit hard by the current slowdown which has meant huge job losses and uncertainty.

According to the government's own estimates, export-oriented companies have laid off over 70,000 employees in the face of a serious downturn, leading the Federation of Indian Exports Organisation to say that at least one million people will be out of jobs, of which half would be from the textiles industry alone.

The Pimpri-Chinchwad industrial area outside Pune has also been severely affected. Over 4,500 small-scale industries in the area have reached zero output and more than 35,000 people lost their jobs.

The forgings industry has lost over 50,000 jobs. Or, look at the leather industry, which employs 2.5 million people. The industry had warned of 500,000 job cuts if things didn't improve and the gems & jewellery industry was talking about laying off over 130,000 workers.

Over 30,000 people working in special economic zones are already out of jobs as several such projects have either been scrapped or whittled down. Some of these numbers may be exaggerated, but it does indicate why workers panic the moment managements mention the term 'restructuring'.

HR experts, however, are hoping that India Inc's labour pains would reduce as the economic environment has been turning for the better over the last couple of months.