News
Business
Movies
Sports
Cricket
Get Ahead
Money Tips
Shopping
Sign in  |  Create a Rediffmail account
Rediff.com  » Business » Create jobs in US, get a green card!

Create jobs in US, get a green card! 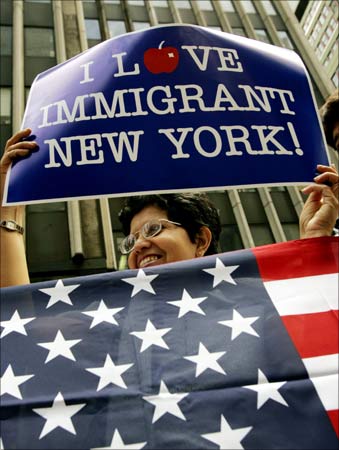 The bill by Kerry and Lugar, chairman and ranking member, respectively, of the powerful Senate Foreign Relations Committee, titled The StartUp Visa Act of 2010, will allow an immigrant entrepreneur to receive a two-year visa if he or she can show that a qualified US investor is willing to dedicate a significant sum -- a minimum of $250,000 -- to the immigrant's startup venture.

The legislation would amend immigration law to create a new EB-6 category for immigrant entrepreneurs, drawing from existing visas under the EB-5 category, which permits foreign nationals who invest at least $1 million into the US, and thereby create 10 jobs, to obtain a green card.

Under Kerry and Lugar's bill, after proving that he or she has secured initial investment capital and if, after two years, the immigrant entrepreneur can show that he or she has generated at least five full-time jobs in the United States, attracted $1 million in additional investment capital or achieved $ 1 million in revenue, then he or she would receive permanent legal resident status.

Kerry in introducing the bill, argued that 'global competition for talent and investment grows more intense daily and the United States must step up or be left behind'.

He said that "everywhere Dick Lugar and I travel for the Foreign Relations Committee," he said, "we see firsthand the entrepreneurial spirit driving the economies of our competitors."

Kerry said that he believes that "creating a new magnet for innovations and innovators to come to the United States and create jobs here and it will offer our economy a double shot in the arm--robust job creation at home and reaffirmation that we're the world's best place to do business."

Lugar, echoing similar sentiments, said: "Our country should strive to attract to the United States the most talented and highly skilled entrepreneurs."

He said that "we should channel the power of innovative thinkers from around the world and American investors towards creating jobs and encouraging economic growth and future prosperity."

Among the Indian American entrepreneurs -- many of whom are from California's Silicon Valley -- strongly supporting Kerry and Lugar's bill, were, Sameer Gandhi of Accel, Manu Kumar of K9 Ventures, Deepak Kamra of Canaan Partners, Ravi Belani of Draper Fisher Jurvetson, Karan Mehanderu of Scale Venture Partners and Ajay Chopra, of Trinity Ventures.

In a missive to all of the lawmakers in the US Senate, the venture capitalists said they fully endorsed the startup visa and declared that "since the founding of our country, the entrepreneurial spirit has been a defining characteristic of the United States."

The investors said that the United States was "the world leader in creating new enterprises, advancing innovation, and creating jobs as a result of this entrepreneurial activity."

They spoke of "fast-growing companies have long been the main source of new jobs and innovation in the United States," but they bemoaned that "however, in recent years our visa laws have made it unnecessarily difficult for immigrants to launch new companies here."

"We view this as a major competitive disadvantage for our country in the 21st century," they added.

The venture capitalists pointed out that "companies such as Google, Pfizer, Intel, Yahoo, DuPont, eBay and Proctor & Gamble are all former start-ups founded by immigrants. Yet immigrants have not only founded major, well-known companies, foreign-born residents made up just 12.5 percent of the US population in 2008, while nearly 40 percent of technology company founders and 52 percent of founders of companies in Silicon Valley are foreign-born."

They said that "as venture capitalists and angel investors, we often fund companies at their very inception," but lamented that "in cases where there are immigrant founders , it is almost impossible for them to get an appropriate visa to stay in the United States and start their company."

"Even in cases where the founders already have a visa of some sort, they typically can't use this visa to start a company. As a result, they often have to leave the country to start their company, resulting in a loss of innovative entrepreneurs and the correspondingly created jobs in the United States."

Consequently, according to these investors, "There are multiple costs to our country and our economy. First we lose the entrepreneur, who is a critical part of our society. We then lose the jobs that are created by the new venture, which in the success case could easily number in hundreds of thousands over the first decade of the company's life."

"Finally, we run the risk of losing our reputation as the greatest country in which to start a company," the investors added.

They said that to alleviate this issue, "We support the Startup visa proposal," and pointed out that "early stage companies are often started with funding of at least $250,000."

"In these situations, if a qualified US venture capital investor or a US 'super angel' (an angel investor that has a track record of regularly participating in see round investments) is willing to commit a significant investment for a foreign entrepreneur to start a company in the United States, we believe the entrepreneur should be able to get a 'StartUp visa,'" they said.

"We believe these thresholds are appropriate for creating credible startups which, if successful, can lead to numerous US based jobs," they added.

Why US Senate will approve $7.5 bn aid to Pak