Two trends are becoming amply clear since the third quarter policy review by the Reserve Bank of India in January. One, the economic growth upturn is becoming stronger and more broad-based. Two, non-food drivers of inflation will become more palpable as full-year economic growth hits the near-term 8-8.5 per cent realisable potential growth rate. Both factors argue for RBI to shift, in its April policy review, to the next choice of instruments - policy interest rates. 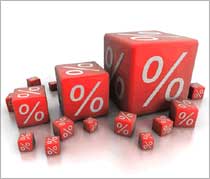 It is striking that several government advisors and ministers correctly play up the strength of the economic upturn, but - incorrectly and somewhat self-servingly - play down the inflation risk, especially outside the short-term food supply shock.

The politically-motivated hikes in minimum support prices in the run-up to last year's general election and the government's mishandling of the supply response to the drought only exacerbated the effect of the poor monsoon on food inflation.

Higher minimum support prices did favourably impact rural consumption, but higher food inflation appears to be the price all have paid for that rural resilience and for more political stability.

RBI has done an exceptional job of cushioning the hit to the economy from the global credit crisis, and in managing the early phase of the economic recovery. It needs to continue to maintain its credibility, and thus move to the next phase of monetary tightening in order to avoid any unnecessarily rushed or exaggerated tightening later on.

The evolving trajectory of industrial production suggests that GDP growth will likely adjust upwards to be at least 8-8.5 per cent year-on-year (y-o-y) in the January-March quarter, after being below trend at 6 per cent y-o-y in the October-December quarter.

However, this should already be factored into RBI's revised GDP growth forecast of 7.5 per cent for FY10 that was announced in January. Thus, the strong tone of industrial activity should not prompt any action before the next scheduled meeting on April 20 where the annual policy for 2010-11 will be announced.

More importantly, the industrial rebound is showing welcome signs of becoming more broad-based. The capital goods sub-sector is picking up momentum and complementing the surge in consumer durables, especially automobiles.

It is highly unlikely that automobile sales will maintain the pace that they have posted in the last few months, but industrial recovery becoming more balanced is exactly what policy makers would want to see.

It is somewhat amusing to watch several Indian industrialists thumping their chests about how great the growth outlook is but quickly warning that the stimulus measures should not be withdrawn.

They can be dismissed as being self-serving; the underlying growth dynamics were strong enough for the government to have withdrawn more of its stimulus measures in the Budget. Admittedly, risks persist, but policy is rarely based on low probability outcomes.

Food inflation is showing some early signs of rolling over and is poised to fall further, but non-food components will become more important, even as headline wholesale price index inflation comes off later on.

It is important to appreciate that the economy still suffers from being supply-constrained and has several supply bottlenecks that, as aggregate demand rebounds, could cause higher inflation via a demand-supply imbalance. Thus, managing aggregate demand via monetary policy becomes more relevant.

But, that is a somewhat new field for Indian policy makers outside RBI as they have traditionally only focused on dealing with supply issues, although even here the government left a lot to be desired for the way it managed the supply response to the drought.

Several investors and analysts have been misreading RBI, despite its better guidance and greater clarity in communication. The majority has been expecting an early and strong response by RBI, but it has not followed that script (rightly, in my view).

There are three main reasons for misreading RBI's response function: Focus mainly on headline WPI inflation, rather than the underlying details; not enough appreciation for the constraint imposed by the sizeable government borrowing that RBI has to facilitate; and lack of sufficient realisation that RBI is not an inflation-targeter (yet another right call by RBI), and that it has other objectives as well that influence its monetary policy decisions.

From a structural angle, the level of interest rates in India remains high relative to foreign interest rates. This owes mainly to the slow pace of reforms by the government that enhances the longevity of prevailing price rigidities. But RBI not raising rates to deal with the evolving economic cycle is not the way forward.

Instead, the government needs to undertake more reforms and eliminate rigidities that will lower trend inflation, which, in turn, will further boost sustainable trend economic growth via a structural decline in local interest rates. Thus, the solution to lower sustainable inflation is with the government, not with RBI.

The Budget moves to partially reverse the fiscal stimulus measures will add to inflation as a one-time effect, as would the tax on petrol, diesel and refined products. However, these relative price adjustments are a one-off, and should not prompt RBI to normalise monetary policy significantly more rapidly than what it was planning to do owing to the pick-up aggregate.

So, what should RBI do on April 20? Most likely, a 25 basis points (bps) hike in policy rates should come through. Since RBI now plans to avoid inter-meeting moves (unless there are extreme circumstances), there could be a possibility of a small hike in cash reserve ratio (CRR). The underlying dynamics do not justify a 50 bps rate hike, in my humble opinion.

Bonds are generally a poor investment in a growing economy, and in India, the main borrower, i.e. the government, is the most price-insensitive. The yield curve in India is so steep that it makes investors dizzy.

Still, a 10-year yield has more height to cover, as, unless RBI has some trick up its sleeve, the net issuance of securities in FY11 will be higher than that in FY10, even though net borrowing will be lower. Further, nearly 70 per cent of the full-year borrowing will probably be in the first half (the first-half borrowing calendar will be announced later this month).

The bottom line is that RBI should stick to a handle-with-care monetary exit, and avoid a "sledgehammer" approach. It is time for transition to using policy rates for monetary management that will complement CRR moves, if needed.

Delayed action will unnecessarily risk moves of bigger magnitudes over a shorter period of time that could cause heartburn that can - and should - be avoided.

The author is head of India and Asean economics at Macquarie Capital Securities, Singapore. The views expressed are personal