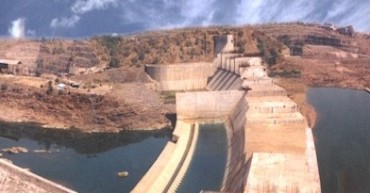 For this isolated tribal community - living in tiny hamlets scattered across the verdant hills of the Polavaram mandal, from where the spillway for the Rs 17,500 crore (Rs 175 billion) Indira Sagar project begins - what's important is its unique culture and traditions.

"The government will give us money (in the form of a rehabilitation & resettlement package). But, what about our emotional attachment to the forest? We cannot live in a concrete jungle. What we want from the government is allotment of alternative forest land. We want to be allowed to stay close to our Mother (Nature). If not, we will stay with Her and submerge with Her," says A Ankisetty, a 67-year-old tribal from Paidipaka village.

The New Devaragondhi Rehabilitation Colony stands testimony to this determination. Situated 5 km from the forests on the outskirts of Polavaram town, it was constructed with money from the state government's R&R package.

It comprises 100 houses, replete with a community hall, day-care centre, primary school, Durga temple and church. But, the colony wears a deserted look - except for the four tribal families that live there.

"We are here to convey our grievances to politicians and officials, who shy away from visiting our tribal villages and, hence, come here quite often," says Venkata Lakshmi, a member of the government-run Development of Women and Children in Rural Areas programme from Devaragondhi village.

Venkata Lakshmi - the only literate in the village - has just one concern. "What the government had earlier promised, including an R&R package for girls above 18 years and compensation for borewells, has not yet been fulfilled. If this is the fate of our Devaragondhi village, when will the government address the problems of other villages, which are already in the grip of floods?" she asks. "Let our tears mingle with the Godavari water."

The compensation package extended by the state government varies from village to village, tribal to non-tribal and the nature of land holdings.

"Our village, Ramayyapeta, which has 450 households with 250 acres under cultivation, will be submerged because of the project. I have three acres. The government has given compensation of Rs 1,40,000 an acre. But, we are yet to receive rehabilitation packages for 400 more households and alternative land for a cemetery and sheds for livestock," says 33-year-old Boreddy Apparao.

Tourism has suffered here, too. The number of tourists to Polavaram has come down to nil. Until last year, around 1,500 tourists used to come every day to visit the Papikondalu hill range by boat from Polavaram. Papikondalu, too, will disappear once the Indira Sagar project takes shape.

"Until 2009, my hotel was brimming with tourists, who contributed about 60 per cent to my daily counter sales of Rs 5,000. It is not the case now," laments Subbayya, the proprietor of Sri Sai Hotel.

Things are no different for the 450-odd villagers of Kummarilova, a small hilly village in East Godavari. When the state government approved a unique Rs 40-crore (Rs 400 million) aqueduct as part of the Indira Sagar project, which would enable the Godavari to flow even as vehicular traffic plied beneath, the villagers were a happy lot, not realising that they would fall victim to this project.

The Polavaram water would flow atop the hill and then on to the structure.

"We now realise the 'uniqueness' of the project! The government wants to evacuate the village as it intends to use it as a dumping yard. Government officials have already surveyed the village, rejecting our demand for an R&R package. There is no clear picture from the officials as yet to the compensation," says village panchayat president J Varalakshmi.

With a majority being daily labourers, Kummarilova villagers approached 28 farmers in the village, who together hold 49 acres of land that will also be acquired by the government, and knocked on the doors of a nearby court in Tuni.

"The court ordered that our views be considered before any decision on the project was taken. Government officials, however, are deaf to our plight. We plan to approach the Andhra Pradesh High Court soon," she says.

The only sector that Lady Luck is smiling upon is real estate. "With the construction of the zero point (or outer tunnel regulator) from where the Polavaram canal begins, prices of rainfed land have escalated to Rs 8,00,000 an acre from Rs 2,00,000. It's time for us to do brisk business," says a beaming Vygreshwara Rao, a small-time realtor from Polavaram town.

This is the first of a two-part report on the situation on the ground at Polavaram, site of the controversial Indira Sagar canal project.

Projects to be cleared fast: PM to Orissa CM