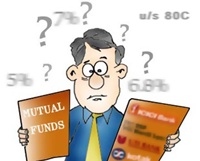 The monetary policy of RBI released on Tuesday, has been received badly by the stock market, with the indices tanking 2.5 per cent. On the personal finance front though, there is not much of a change coming from the monetary policy.

The key decision in the monetary policy is that of exiting the supportive stance for the expansionary economy. To use the exact words from the monetary policy, "The precise challenge for the Reserve Bank is to support the recovery process without compromising on price stability. This calls for a careful management of trade-offs. Growth drivers warrant a delayed exit, while inflation concerns calls for an early exit. Premature exit will derail the fragile growth, but a delayed exit can potentially engender inflation expectations."

Going with the decision to exit, the RBI has started taking measures to reduce the money supply in the system.

Though the decision seems to create some risk, RBI has treated the implementation softly. The measures taken to reduce the money flow are:

The impact on the Aam Aadmi on India is going to be minimal from the above decisions.

The SLR change really has no real impact on the economy as the scheduled commercial banks are already in maintaining a SLR of 27.6 per cent. So there is no real money that is going out of the system. That means that if A needs to take a loan, the money to lend to B is still there with the banks.

The reduction in support to exports is marginal. This is because using the outstanding export credit is only one of the means for financing exports for the exporters.

Discontinuing the support to Mutual funds can have an impact on the Net Asset Values of the funds. The support was given in the first place to prevent selling off of equity and asset holdings of MFs, when there are a lot of individual investors asking the MFs to return back their money. If the MF has to sell their assets to give money back to their investors, the value of the assets (in this case shares), there will be a further fall in the price of the shares. This will erode the value of the assets of the investors further. To prevent this RBI has allowed MFs to borrow from banks to meet the needs for redemption (investors asking their money back). This helped the MFs to give money back to the investors and at the same time hold on to the shares and other assets. This helped both the investors who remained invested and those who wanted their money back.

Since the past 3 months or so, we have seen the retail investors starting to invest again in the equity oriented MFs. So there is no real pressure on the mutual funds now for redemption. However, there could be some short term redemption pressure with the stock market oscillating a lot in the past few weeks.

The removal of lending support from banks to MFs, will affect the retail investor in the short term.

So we can say it is not true that the HFCs were making use of the bank lending to support borrowers. So removing the support will not affect them.

At the same time many borrowers who delayed their purchases of houses and cars are back at their bank door steps. This is seen in the results declared by automobile companies (both 2 wheelers and 4 wheeler manufacturers have shown extraordinary results).

If new deposits do not come in during this quarter of the year too, banks may be short on the funds to lend. This may increase the interest rates.

Though the stock market has not liked the RBI Monetary Policy, there is virtually no impact on the common citizen's finances. As a principle though, it is of some concern that RBI has decided to exit the supportive stance that it had for increasing the country's money supply. The additional money supply that RBI has pumped in during the global financial crisis has helped the economy to stabilize and recover to some extent.