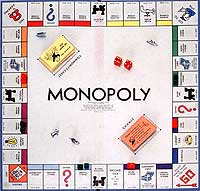 Google will be working with giant toy company Hasbro to produce a spectacular online version of Monopoly, say reports. The game uses Google Maps as a board, allowing players to choose from millions of streets worldwide in their bid to become virtual property tycoons.

The rules are almost the same as the traditional board game, where only one person can buy an address, and then build on the plot to earn extra rent and increase their fortune.

However, the online version also lets players build skyscrapers, football stadiums, and other buildings as well as the usual houses and hotels. And the 'chance' cards give players the chance to ruin rivals by building prisons, rubbish dumps and sewage works on their streets.

The free game, which has no real cash prize, is being run to promote the new 3D Monopoly City game. "It's a chance to escape the harsh reality of recession and enjoy building up an empire," the Sun quoted Hasbro as saying.