Sanjay Jha (left) of Motorola and Vikram Pandit (below) of Citigroup are among the three Indian-origin men who have made it to the league of top 25 highest paid men in the world.

According to the list published by Fortune and compiled by executive compensation research firm Equilar Inc, Motorola Co-CEO and CEO, Mobile Devices, Sanjay K Jha with a total annual compensation of $104.5 million for the year 2008 was ranked second in the list.

The list was topped by Aubrey K McClendon chairman and CEO of Chesapeake Energy, whose total compensation amounted to a whopping $112.5 million. 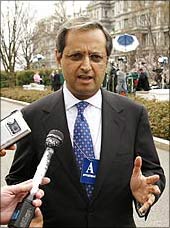 Interestingly, there is a huge difference between the compensation package of the highest paid men and women across the world.

While, the highest paid man is Aubrey K McClendon with a total compensation of $112.5 million for 2008, Oracle president Safra Catz, who was the highest paid woman executive, received a pay package of just $42.4 million.

The chart was prepared by looking at companies with more than $1 billion in revenues.