Fast on some, stuck on others - Pranab's mixed bag

Finance Minister Pranab Mukherjee had made 45 major announcements in his Budget speech for 2009-10. As he prepares to present his next Budget for the United Progressive Alliance government on February 26, Mukherjee may well pat himself on the back for having fulfilled almost four-fifths of the promises he had made less than eight months ago. 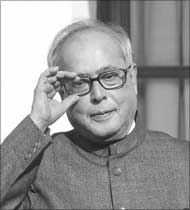 Action on implementing 36 of the 45 major announcements has either already been completed or is in the final stage of implementation. Considering he had less than a year to implement the initiatives he had announced on July 6, 2009, Mukherjee's achievement looks even more creditable.

That, however, is only half the story. Mukherjee could not implement nine of the promises he made in his Budget for 2009-10 and most of these pertained to significant areas of the economy.

For instance, India Infrastructure Finance Company Limited was to have evolved a "takeout financing" scheme, in consultation with banks, to facilitate incremental lending to the infrastructure sector. IIFCL had prepared a scheme, but the banks are yet to accept it. Thus, the finance minister's idea remains on paper.

Mukherjee's biggest failure was in fiscal policy reform. He did manage to bring out the paper on the Direct Taxes Code within the promised date. But, thanks to the adverse feedback from industry and tax administrators, he could not keep his second promise of presenting a bill in Parliament, based on the new Code, in the winter session of 2009.

A similar fate awaited the proposal on a Goods and Services Tax. Mukherjee had set a target date of April 2010 to introduce GST in the entire country. While the proposal for a new GST regime is ready, legislative work to facilitate the change has not begun. There is no hope that the target would be met.

Apart from the IIFCL initiative, Mukherjee had also announced in his last Budget that action would be taken to develop a national gas grid to facilitate transportation of gas across the country. A draft Cabinet note for setting up the proposed authority is ready. But, it has yet to cross the hurdle of inter-ministerial consultation.

To introduce stock market reforms, Mukherjee had announced the threshold for non-promoter public shareholding for all listed companies would be raised in a phased manner.

While consultation within the government has begun and the markets regulator, Securities and Exchange Board of India, is examining the possibility of making a minimum public shareholding of 25 per cent for all listed companies, no new policy is in place.

Even in respect of UPA's aam-aadmi agenda, the finance minister's promises have failed to spur action by the ministries concerned in many areas. There was a proposal for providing a real wage of Rs 100 a day as an entitlement under the National Rural Employment Guarantee Act.

No action was taken on this, as the formula to link it with the inflation rate has not been finalised. Even the scheme for providing 25 kg of rice or wheat per month at Rs 3 a kg to people below the poverty line has not started, since the food security bill is yet to be finalised.

The Swarna Jayanti Gram Swarozgar Yojna was to be restructured as the National Rural Livelihood Mission to make it universal in application. That restructuring, too, has not happened, though a proposal to meet that goal has been finalised. The corpus of the Rashtriya Mahila Kosh was to have been raised from Rs 100 crore (Rs 1 billion) to Rs 500 crore (Rs 5 billion).

Action on this, toom is awaited. And, the promised programme to rebuild infrastructure damaged by Cyclone Aila in West Bengal has not made much progress because the state government's proposal on the matter is awaited.

The areas where Mukherjee's announcements have seen action without any delay pertain to allocation by the finance ministry for the various schemes announced by him in the Budget. These include extension of the debt waiver scheme for farmers, allocation of more funds for exporters and schemes under the Jawaharlal Nehru National Urban Renewal Mission, Indira Awaas Yojana and Bharat Nirman, introduction of simplified forms for payment of taxes, launch of the national mission for female literacy, social security schemes for weavers, fishermen and artisans, modernisation of employment exchanges, creation of mega clusters for weavers in the handloom and powerloom sectors and a host of schemes for modernising police forces and internal security mechanisms.

The finance minister's significant achievements reflecting his major policy initiatives were the introduction of a nutrient-based subsidy regime which reduced the government's financial burden on fertiliser subsidies, a policy on disinvestment of government equity in public enterprises (action on which has already been initiated) and the formation of the Unique Identification Authority of India to create an online database for all Indian residents.