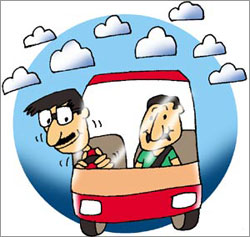 With Budget announcements coming up this week, more industries have come up with their wish list. We expect the government to continue its focus on nation building areas like infrastructure, agriculture and social sectors. We present the wish list of companies across sectors.

Auto: Auto industry witnessed an excellent 2009 with strong growth in volume sales. Stimulus package offered by the government also played a key role. While rising raw material costs is a worry, the players expect the government to not make any negative announcement.

Pharma: The sector has seen strong growth on the domestic front. However, export sales have seen some slowdown.

Recently, the industry is facing several challenges like domestic pricing pressure and pressure on finding and developing new molecules. Focus on R&D is required.

Capital goods: With government's thrust on infrastructure expected to continue, this sector may see some good announcement. The companies have the following wishes.

Cement: Cement sector is expected to see good demand on account of infrastructure sector and low cost housing demand. However, realisations would see some pressure on account of higher supply due to incremental supplies. The companies have listed their wishlist for the coming budget

Telecom: It is one of the fastest growing sectors in India. India has the second largest telecom user base in the world. However, the companies are recently witnessing intense competition leading to a price war.

The increasing proliferation of dual SIM cards in the market is also leading to subscribers shifting their operators from time to time. While urban areas have nearly saturated, the companies are banking on rural areas and overseas for the growth.

The companies are also looking at new avenues like data-based services to sustain margins. Mobile Number Portability is expected to become a reality soon. However, the auction process for 3G spectrum has been delayed to FY11.

IT services: The sector has seen signs of revival over the last couple of quarters after witnessing a tough FY09. The companies expect the Budget to focus on maintaining an environment conducive to the future growth.

Tax exemption U/S 10A/10B to STPI limits: The companies want a further extension for the Software Technology Parks of India (STPI) scheme by at least a year. The industry has just recovered from a severe global recession and the exemption would improve their cash flows. The companies also want the abolishment of MAT on STPI units.

Media: While the sector witnessed lower ad revenues on account of the economic slowdown last fiscal, some pick up have been witnessed in recent times. From a longer-term perspective, greater spending power, demographics, rising consumerism and robust economic growth will bide well for the sector.