Budget: Just who saves how much tax! 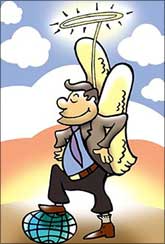 Which segment of Indian citizens has emerged the winner post-Budget 2010?

Reality television shows have become a big part and parcel of Indian television as well as Indian society. Shows where you get to answer questions and become an overnight crorepati (millionaire), there's even one where you just need to say 'deal' or no deal' and could walk away with Rs 50 lakh (Rs 5 million).

To be honest, at times these shows lose the 'real' effect and start looking 'surreal'. One such 'reality show' is the annual financial exercise of the government of India. The one chance for the finance minister to take centrestage: the Union Budget. Like all shows, the Budget too has winners and losers.

Of course, over the last 76 episodes of this show (76 Budgets have been presented since the first one was presented by Shamukham Chetty in 1947), the Budget has become a boring affair for many.

There have been countless discussions on how the Budget is pro-middle-middle class (the repetition of middle is intentional to define a new creed: the people in the Rs 4 lakh to Rs 8 lakh taxable income).

Men earning up to Rs 300,000 will not have any change whatsoever in their income tax payment. They would be paying the same tax as before.

Similarly, anyone with a taxable income above Rs 400 crore (Rs 4 billion) would be paying the same tax too! (Although I do not know how many Indians would figure in that category, if at all there is someone!) We can thus safely assume that all men with income above Rs 300,000 will be paying lesser tax for the period 2010-11, all other factors or things remaining the same.

The finance minister surely must have gathered some great fans in this segment!

The tables below illustrate the exact percentage of savings for all the three groups.

A beginner's guide to the Union Budget