After more than a quarter century, finance minister Pranab Mukherjee will be presenting this week what he could finally claim is "his" Budget to Parliament. In his first stint as finance minister, in the early 1980s, the shadow of Indira Gandhi would have loomed large for such a claim to be made at the time. 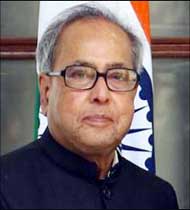 In July 2009, Mr Mukherjee did present his first Budget in the present avatar but the strategy for that was shaped more by the legacy of his predecessor, the fiscal stimulus plan of the prime minister, and the compulsions of an unexpected election victory that had to be consolidated with follow-up victories in the state assembly elections that were due later in 2009, most importantly in Maharashtra.

Moreover, apart from the six weeks he had in office to prepare that Budget, Mr Mukherjee was also working with a team he had inherited and on crucial issues, he deferred to the wisdom of the key advisors to the prime minister at the time, Dr C Rangarajan, chairman of the Prime Minister's Economic Advisory Council, and Mr Montek Singh Ahluwalia, deputy chairman, Planning Commission.

On the critical issue of the level of the fiscal deficit, Mr Mukherjee's instinct was to follow Dr Rangarajan's more conservative approach of bringing the Budget estimate for fiscal deficit below 6.0 per cent of GDP, but an unsure Mr Mukherjee preferred to follow the advice of Mr Ahluwalia, who plugged for a higher plan outlay and got the finance minister to agree to let the fiscal deficit to GDP ratio slide up to 6.8 per cent.

So tentative was Mr Mukherjee about his Budget proposals in July 2009 that his office let it be known that he would not give any post-Budget interviews.

This was the Pranab-babu of the 1980s, wanting to take his time before responding to media queries. Clearly his advisors failed to bring him abreast with the new world of 24x7 television and India's integration into a global economy that never sleeps.

As market indicators began to tank, on the unexpected news of a 6.8 per cent fiscal deficit, and media discussions went all over the place with no one in government guiding the analysis along a pre-determined course, Mr Mukherjee's office changed gears and quickly arranged TV interviews. The market drew its own conclusions - the minister had panicked, it decided - and went into further downward spiral.

The messy handling of Budget 2009 showed that Mr Mukherjee was not fully prepared for the job of a 21st century finance minister. Some saw in the 1980s type industry-specific initiatives a pre-reform era mindset, but those may have been just post-election favours.

In the 1980s, Mr Mukherjee was dealing with a different Indian economy and finance ministers, while being sought after by concession seekers, were not seen as political power centres.

Even as late as in 1998, Lal Krishna Advani, despite having a good Sindhi's instinct for business, chose home over finance thinking, like in the Sardar Patel era, that the home minister is the effective No. 2 in the Union Cabinet.

Globalisation, the new world economy, the end of the Cold War and the new Asian century have changed all that. All around the world, the second most important minister is the finance minister, the treasury secretary or the chancellor of the exchequer.

Surely, Mr Mukherjee understood this because, as he has himself revealed in interviews, he chose finance over home when his party president asked him what portfolio he wanted.

Today Mr Mukherjee has his own team in place and he is in a legacy-seeking mode, as he himself confessed in a couple of recent interviews.

He is no longer focused on becoming a prime minister or the president. He knows that he is the "Sardar Patel" of our times, even if he is not the home minister. So, what should one expect from a legacy-seeking finance minister?

Everyone expects him to improve the fiscal health of the government, reducing subsidies and raising taxes. Mr Mukherjee has already revealed his iron fist with the decision to cut the fertiliser subsidy, and with his tough talking he reduced even the "Iron Lady" of Bengal to tears!

He is expected to informally launch the rollout of the proposed goods and services tax with a 2 percentage point hike in excise duties as a first step. He is expected to focus on infrastructure and education, the cornerstones of the foundation of long-term economic development.

Fiscal re-empowerment of the government and incentivising employment-generating investment in the economy will be good legacies to leave behind.

Is one reading too much into Mr Mukherjee's statements and postures? Perhaps. But he should know that he cannot afford to disappoint this week. After a long time, the finance minister of India presents a Budget without any dark shadow cast on him.

No crisis to recover from, no major election around the corner to worry about. No coalition partner waiting to topple the government, no pressure on him to hold back.

What Mr Mukherjee does this week will, in many ways, define the future of this government, the medium-term course of the economy and, above all, for the finance minister himself, how he is remembered by history - an also-ran, or the man who came from behind to lead from the front?

In 1984, Euromoney rated Mr Mukherjee one of the five best finance ministers in the world for his role in improving the finances of the government that enabled Indira Gandhi to score a political point returning the last instalment of the IMF loan. In 2010, he could easily become the best finance minister, considering so many around the world are scoring self goals and leaving such bad legacies.

Hopefully, that's the kind of legacy-seeking mood in which Mr Mukherjee is writing his Budget Speech this week.