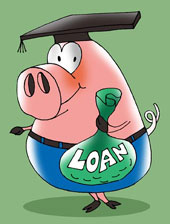 The Union ministry of human resource development, headed by Kapil Sibal, has drafted a proposal on educational loans, which entails changes that will increase the accessibility of these loans -- the objective being an equitable distribution.

The proposed changes include:

Reduction in the rate of interest: The ministry is planning to subsidize the interest rates on educational loans and intends to bring in down to as low as 4%.

For the same, the ministry is working on a refinance scheme. This would involve, setting up of a Special Purpose Vehicle (SPV) to refinance banks for giving educational loans at a rate of interest below the PLR. National Education Finance Corporate will have to be set up to refinance the banks.

Impact: Banks have been witnessing defaults and non-payments on educational loans. This may change. Banks are set benefit on two counts -- defaults should reduce because of low rate of interest charged to the borrower and even in case of defaults; banks will be able to cut their losses by virtue of subsidy provided by the government.

Set criteria for charging interest rates: It is intended that the rate of interest charged will be based on parent's income.

Impact: The highest rate of interest to be charged under the proposed structure i.e. 9% is lower than the lowest rate currently charged by banks, which is in the range of 10%-12% in most instances. This will certainly prove to be beneficial to students across the board.

Impact: This will reduce the pressure on the borrower by giving him/her greater amount of time for re-payment.

Impact: Typically interest rate on the education loan starts accumulating as soon as the course is over. Since interest during the moratorium period will be paid by the government, EMI for the borrower is set to fall. This will reduce pressure on his/her cash flows.

This is a proposal which has been submitted to the Planning Commission and has been discussed with them too.

The Planning Commission is currently looking into the proposal of setting up a National Education  Finance Corporation to refinance banks. Based on the feedback received, the ministry will prepare a formal note which will be submitted to the Cabinet for approval.

If this proposal is approved by the Cabinet, educational loans will certainly be accessible to more number of students. 'Financial issues' will hopefully not deprive a student from pursuing higher education.