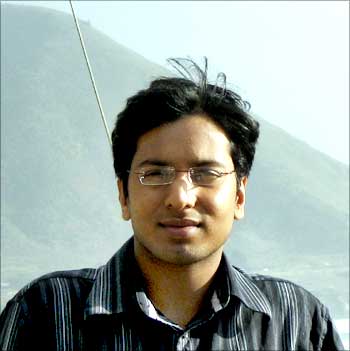 Image: Prashant Pitti, co-founder, Indiakhelo.com
Manu A B in Mumbai

Prashant Pitti loved sports since his school days and wished to be one of the best basketball players in India. He used to spend hours playing the game with great passion. But there was lot of pressure on him to quit what he loved the most to be more academically oriented. So he was forced to sideline sports and concentrate on studies.

Pursuing academics seriously, he got admission to the Indian Institute of Technology, Madras. It proved to be a turning point in his life.

Four years later, after graduating in electronics engineering he got a job in the US. But he was not satisfied. This was not what he wanted to do. He decided to come back to India and work on his boyhood passion - sports, a neglected field in India despite its immense potential. But it was not an easy ride. His family opposed this idea vehemently. It took a lot of time to convince them.

Twenty-five-year-old Prashant started Indiakhelo.com in March 2008, researching on how to radically change sports scenario in India. He got the support of fellow IITians who had also taken up regular jobs but were passionate about sports. Akhil Ravi, Varun Gupta, Aman Prakash, Manish Singh and Vaibhav Tandon who have been state or national level players joined him in this unique initiative.

Indiakhelo has made a good beginning with clients like Mahesh Bhupathi Team Tennis Academy and Mumbai School Sports Association. Prashant and the co-founder have invested about Rs 35-40 lakh (Rs 3.5-4 million) in this venture to find and nurture talent from across India.

They plan to conduct tournaments, give ratings to talented youngsters, telecast them on television, earn through advertisement and reward players and team according to their performance.

Prashant Pitti takes you through his exciting journey of becoming an entrepreneur in a bid to bring out India's best sporting talent. 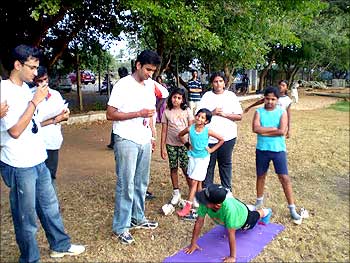 Tell us more about how you became an entrepreneur, the difficulties you faced in setting up the portal?

Sometimes your heart speaks out louder than your head. Sticking to a comfortable job would have been an obvious choice for the latter. I realised, at most I would end up not earning for one or two years, which is hardly only 2-3 per cent of a lifetime, but if our innovation and hard work achieve their goals.

The experience has been great, we have amazing clients like Mahesh Bhupathi Team Tennis Academy and Mumbai School Sports Association. We are also working along with the government to promote sports in rural parts of India. The sports ministry has appreciated our efforts.

We have found that the tribals in the Jhaba district in Madhya Pradesh are good at archery. So we are planning to conduct a tournament, which will be funded by the government. Till now IndiaKhelo has conducted more than 14 events across India.

In December, IndiaKhelo.com is conducting India's first ever school and college sports league, IRL - Indian Regional League in Bangalore for various sports. All the matches will be telecasted on regional television channels. 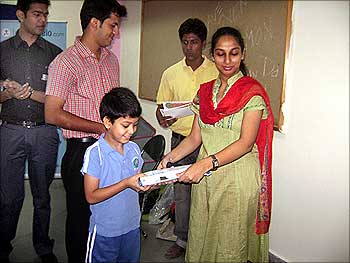 Did you have any role model who inspired you?

It would be my father; he is a self-made successful business man. When I was a kid, I often use to hear him say "For gold to shine, it has to burn." This quote keeps me thriving to work even harder.

What are the most important things that entrepreneurs must do to succeed?

Entrepreneurship is hard, so unless you find your true calling, don't jump into it. You will know once it has arrived, then working in a regular job will be even harder.

Don't be much bothered with initial setbacks and criticism. Most innovation worth their salt goes through four stages: being ridiculed, criticised, accepted and then finally loved by people.6 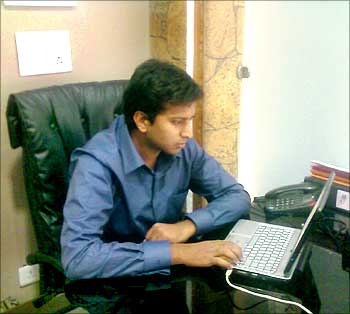 I have spent most of what I saved in the three years that I spent in the US.

Have you received funding? How much have you invested so far?

No it's a self funded firm till now, we wanted to stabilise our venture first before looking out for investors aggressively. We have invested about Rs 35-40 lakh (Rs 3.5 to 4 million) till now.

We have started generating revenues, and we hope to break even in the next one year. IndiaKhelo has a great potential. The market size of advertisement in grass-root sports league reaches $6 billion in US, for India these numbers are almost negligible till now. But IndiaKhelo will definitely be able to leverage its first mover's advantage to maximum. Image: Indiakhelo gives a opportunity to youngsters to showcase their talent.

What was the idea behind starting this portal?

Some level of local competition and quantifiable numbers are required in sports to promote players to consider sports more then just a hobby.

IndiaKhelo.com keeps a track of each player's performance (by conducting its own contests and tournament like IRL) and gives them India's only National Sports Amateur Rankings depending upon their performance compared to other players all across India. IndiaKhelo ranking system is based on internationally recognized and used ELO ranking system.

What is the Indian Regional League?

You see there are a few nations, who are consistently producing champions. They have very strong and well organised sports structure at school/college level. As a result, these nations pay more attention for institute teams, more than what we do for a India vs. Pakistan cricket match.

Good performing institute teams earn amazing revenues through TV ads, sponsorships, merchandise and ticket sales, which they use to provide scholarships to talented sportsmen.Few examples of these leagues are High School Sports, Friday Night Football and NCAA in US. 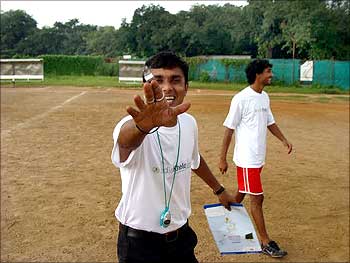 What are your company's future plans? What kind of changes will you bring about in this area five years from now?

Five years from now, IndiaKhelo plans to have its own national TV channel, where IndiaKhelo conducted school/college level contests and tournaments will be telecasted 24/7 to get talented players into limelight and help them earn revenues on the basis of their performance.

IndiaKhelo.com is working towards enrolling millions of budding sports talent from all across India, for various sports and age categories. Using the power of unbiased centralised database, IndiaKhelo will inculcate spirit of local healthy competition and assist players reach their maximum potential and bring glory to India.

We hope to make India a sports power house in the next 10 years. IndiaKhelo would take all measures to get more talented sportsmen from grassroots level. Ten years down the line, IndiaKhelo wants to be known as forefathers of the new Indian sports arena.

It is very hard to find leisure time most of the time goes by either working or researching. Nonetheless, I do like to listen to music and watch movies.6 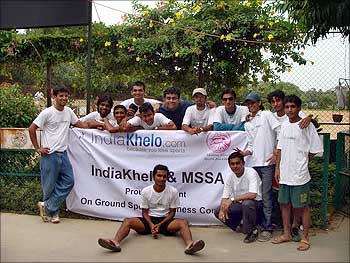 How can the Indian Regional League help?

We hope to bring similar changes in the Indian sports industry, by conducting a tournament like the Indian Regional League, where all the matches will be telecast on the local television channel.

The idea is to generate revenues through television advertisement and using the same revenue to reward school/college teams on the basis of their performance. IRL is a perfect platform for grass-root level players to be able to showcase their talent in the entire region, including their parents, friends and relatives and become local sports stars.

IndiaKhelo has registered about 10,000 players till now from all across India. IndiaKhelo system helps them set quantifiable goals for the year, self-evaluate their position and be recognised as a local sports-star.

IndiaKhelo has developed a report-card, which we give to all players on an yearly basis, so that they know their progress and status in sports. 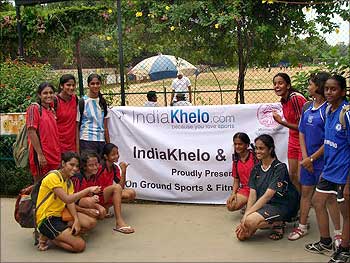 Image: Players rejoice after an event.

How do you spot talented people living in small towns and villages?

As IndiaKhelo is a centralised system, it doesn't matter whether someone lives in rural or urban India. IndiaKhelo team can go to various locations across India, conduct task oriented contests and tournaments and give rural players national rankings solely on the basis of their performance.

IndiaKhelo believes centralised ranking system is the only way to remove bias and unearth talent from remotest location across India.

How does the portal operate? How do you promote sports?

Schools and colleges can register their sports teams on IndiaKhelo.com or even players can represent themselves and register with us. Once registered, they can participate in various contests and tournaments. IndiaKhelo system monitors players' performance, make suggestions for improvement. 6 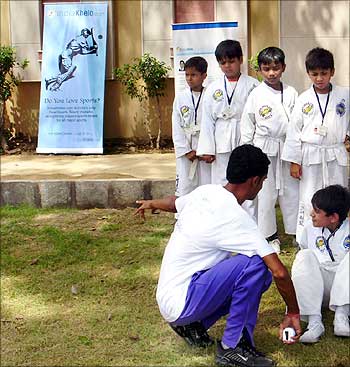 Image: Fitness test for kids in Chennai by IndiaKhelo.

What are the challenges that the young sportsmen in India face?

They put so much hard-work and effort, but the appreciation they get in return is minimal. Also without goal-setting, encouragement and professional guidance even the most talented players seem to lose focus and end up thinking of sports as just their hobby.

What are your views on India's capability in sports? How can India bag more medals at the international events like the Olympics?

Indians are very ambitious people, more than 35 per cent of doctors, scientists and hoteliers in developed countries are Indians. But why are only few Indian sportsmen recognised internationally?

India has a huge potential but we scored very badly. Despite India's 110 crore (1.1 billion) population, which is about 17 per cent of the world population, we were able to get only 3 out of 1000 medals in the 2008 Olympics.

We must believe that we can do much better. Winning a sports event is prestigious in an international community, it also binds the society together. People come together to cheer for their team irrespective of religion, caste and region. Competitive sports make people and nation more healthy and productive. 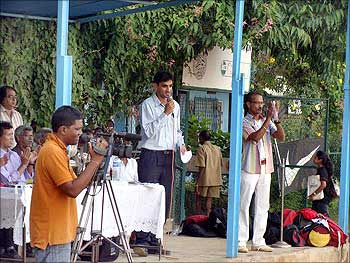 Image: IndiaKhelo addressing the crowd in a tournament.

How has IIT helped you in becoming an entrepreneur?

Even though all the technical knowledge learned at IIT has never been much of use either at my banking stint or at IndiaKhelo, but IIT has definitely transformed my vision and attitude.

I would have limited myself doing a regular job or a business if I did not study at the IIT. The vision of working for a greater cause did come to me while studying at IIT. So IIT has a hand in helping us come up with this concept.

Constant innovation and ability to turnaround things keeps a start-up in competition with big players. Without innovation, one leg would be missing.