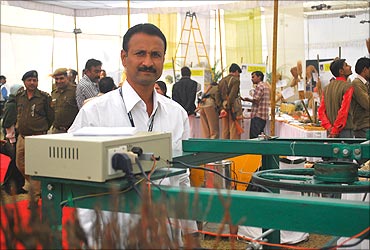 Image: Mallesham with the machine.
Manu A B in Mumbai

Chintakindi Mallesham, a poor weaver from Sharjipet village in Andhra Pradesh, has turned out to be a saviour for hundreds of weavers.

Weavers making the traditional 'Tie & Dye' Pochampalli silk sarees used to undergo a painstaking process, moving their hands thousands of times in a day while weaving sarees. But not any more.

Thanks to Mallesham's patented device to mechanise this process, hundreds of weavers in Andhra Pradesh now spend less time on making a variety of designs.

Mallesham started working as a weaver when he was just 12 years old. After his seventh standard, he had to leave school to spend more time at work. However, he studied during the night and passed the tenth standard.

"It was disheartening to see my mother work so hard to weave sarees. Despite her shoulder and joint aches, she used to spend hours weaving sarees to earn some money to take care of the family," says Mallesham.

And besides his mother, Laxmi, there were hundreds of other women who had health problems. So Mallesham constantly thought about a device to help them escape this drudgery.

"I had made up my mind to make a device to help all the weavers. But it was very difficult to find time to carry on with my experiments. My father and other members of the family thought I was lazy and did not want to work. They scolded me for wasting time. So it took a long time of seven years before I could introduce the first prototype of Laxmi Asu. While earlier it took 5 hours to do the Asu (hand winding process) for one saree, it just takes one and half hours to do the same work now," says Mallesham.

"There are 30,000 women weavers in Andhra Pradesh who continue to do the weaving process manually as they cannot afford to buy the Laxmi Asu machine. They are looking for help as the government has failed to extend any kind of support. It's time for the society to come together to rescue them from this drudgery. We look forward to people who can help this women buy the Asu machines," says Brigadier (retd) P Ganesham, chief co-ordinator, Honey Bee Network, Andhra Pradesh.

If you wish to help, you can send an e-mail to honeybeeap@gmail.com or to Mallesham at malleshamchinthakindi115@gmail.com
Mobile:  92472 82778 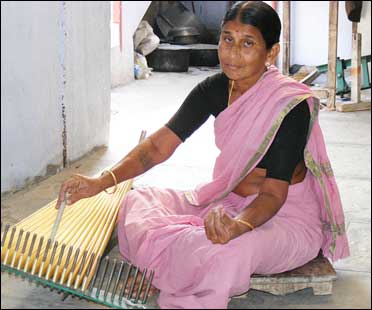 Mallesham's family members have been weaving Pochampalli silk sarees for generations. It is an exquisite tradition of double ikat style of weaving with a wide variety of colours and intricate designs.

The sarees with similar designs on the front as well as the back needs a hand-winding process of yarn called Asu. So weavers were forced to move their hand, over a space of one meter, up and down around semi-circularly arranged pegs, 9,000 times to make one saree.

"My mother had health problems and it was difficult for her to do the Asu for more than two sarees per day. Other women weavers in our village also faced the same problem," says Mallesham. Despite spending 8 to 9 hours doing this monotonous and painful work, they could not earn enough to sustain themselves. 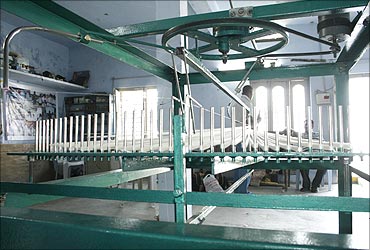 "My mother told me to look out for other work in the city as weaving sarees did not fetch enough money. She did not want my wife also to go through the same trouble," says Mallesham.

But Mallesham did not want to leave his village. By 1992, he started making the parts of the machine, one at a time. Despite being reprimanded for trying to do the impossible, he was determined.

"People told me do not try to be an engineer. Everyone was against me when I was trying to find a way to help all of them," he says.

"I did not have any savings as I had support my family. It was extremely difficult to get money to do buy the spare parts and carry on with the experiments. I borrowed money, took loans at a high interest rate from money lenders," says Mallesham. 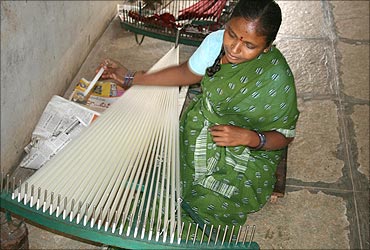 Image: A weaver at work.

It was a tough journey for Mallesham to go against the wishes of the family who thought it was a futile exercise and total waste of time and money. But what kept him going was his ambition to relieve his mother and other women from this never-ending drudgery.

He believed that an easy way could be developed though it could take him years without any proper infrastructure or money in hand. He spent all his hard earned savings to make the device. For four years he continued with his experiments.

"My wife was very supportive and even sold her gold and helped me with cash," says Mallesham. So by 1997, he could complete almost half of his project. 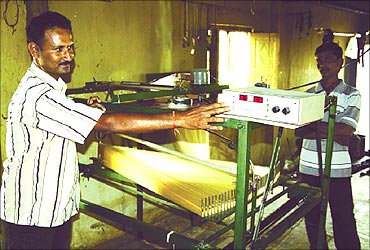 Image: Mallesham with his machine.

After years of hard work, he realised that staying he village could not help. He decided to go to Hyderabad to earn more money. He left home with his machine. Soon he started working with an electrical contractor. He earned enough money for himself and sent money home as well.

"Gradually, I completed the work on the machine. But it still needed fine tuning on its movement. I began to spend time observing how machines run. Finally, I found a machine that moved in a similar motion that I was looking for," he explains.

Mallesham soon bought the spare parts required for the movement required in weaving. He was not too sure whether it would work till he fitted the part on the machine. Finally, the machine worked as per his requirements. The very next day he disassembled the machine and took it to a friend's house in Aler.

He showed it to him and tried it for weaving and it worked. It was the culmination of years of hard work. 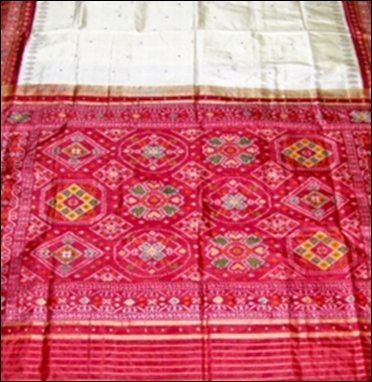 "People in my village were amazed when they saw how this device worked. After I sold the first batch, people gave me good feedback and they also suggested what was required to make it more user-friendly. I incorporated those changes," says Mallesham.

Besides saving time and money, the machines helps in maintaining uniformity in design. So the weavers are very happy. With the Asu machine, 2 weavers can make at least 8 sarees a month and earn about Rs 3,000. With this machine, instead of two sarees per day, now six sarees can be woven in a variety of designs. 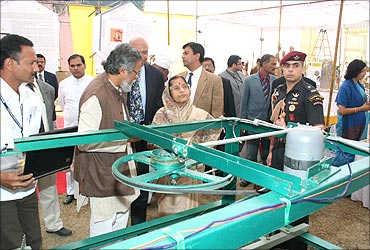 Many people who wish to buy the machine find the price of Rs 15,000 too high.

"The government officials in Andhra Pradesh have not extended any help to me. Neither have they taken any initiative to offer a subsidy to weavers for buying this device. I had approached the Central Silk Board in Karnataka. They have agreed to offer a 50 per cent subsidy for the Asu machine from next year. I hope it will work out," Mallesham says. 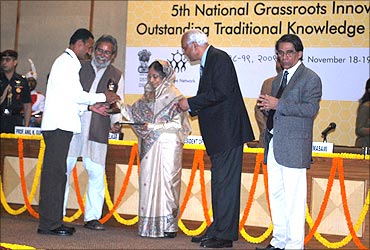 Image: Mallesham receives the innovation award from the president.

The Asu has been Mallesham's best gift to his mother. "Tears rolled down her cheeks when I handed over the first machine to her. Today, I am happy that people have recognised my efforts. Now they respect me," says Mallesham.

"The National Innovation Foundation played a crucial role in making my innovation a big success. They gave me a platform to showcase my device at the exhibition at New Delhi. I got a lot of publicity. I received the innovation award from President A P J Abdul Kalam, there can't be bigger honour than that. I took my family to Delhi for the awards function. For my mother, it was an unbelivable experience," he says, adding that President Kalam appreciated my innovation. 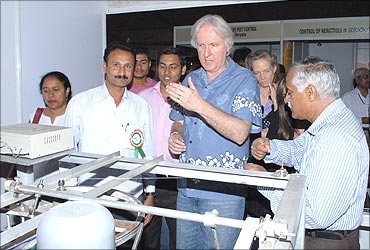 Image: Mallesham with James Cameroon at the innovation exhibition at Rashtrapati Bhavan.

Life has changed considerably for Mallesham. "We did not even have a house earlier; we were staying with our relatives. Today, I have built my own house. I have a computer at home. Whenever I get time, I read about electronics online. I enjoy reading and really wish I could get an opportunity to study further," he says.

For his wife, who gave away her gold to fund his experiments, he did manage to buy her jewellery.

Mallesham is a contented person today. He has two daughters and has high hopes for their future. "My younger daughter is very inquisitive about things, which makes me very happy. I believe an innovator must always ask questions and find solutions to problem. As a child I always used to get many ideas. But I could never focussed on any as there were too many problems in the family," he says. 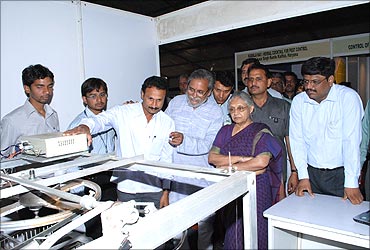 His advice to youngsters: "If you have confidence, you can conquer the world. If you have an idea, never let go of it. Keep thinking about it and do everything possible to make it a success,"

Mallesham is now working on finding a solution to make the tedious work in handlooms easier and hassle-free. This solution can help all types of handloom workers increase their productivity and save time as well.