Only a mix of sterilised currency intervention and capital account management can halt the rupee's rise, says Shankar Acharya. 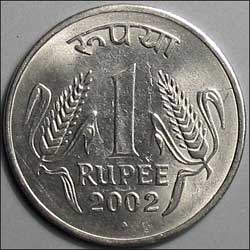 Last week, the Reserve Bank of India published the balance of payments data for the October-December quarter of 2009. It elicited surprisingly little comment.

If this the case, it will be a first since the pre-crisis year of 1990-91. No, I am not predicting any imminent external payments crisis of the kind we had in 1991 -- that would be silly, when RBI is sitting on over $280 billion of foreign exchange reserves.

However, we should at least sit up and take serious notice, especially when the 3 per cent of GDP current account deficit is paired with a near 10 per cent of GDP merchandise trade deficit.

Actually, what is really disturbing is that this second successive quarter of above 3 per cent current account deficit has been registered at a time when the exchange rate of the rupee appreciated quite a bit and inflation accelerated.

Specifically, the real effective exchange rate (REER) of the rupee, according to RBI's 6-currency trade-weighted index, appreciated by a full 5 per cent between September and December 2009.

Normally, when a country runs a moderately high current account deficit and relatively rapid inflation is weakening its competitiveness, one expects to see a depreciation of its currency to bring about an adjustment in imbalances. The opposite seems to have happened.

Moreover, this pattern has persisted throughout 2009-10, with REER appreciating by nearly 15 per cent between March 2009 and February 2010. And the movements in nominal currency rates and price indices beyond February (the last month for which the RBI index is available) suggest further significant real appreciation of the rupee.

The recent surge in the value of the rupee is reminiscent of the sudden, sharp appreciation of the currency in the spring of 2007. At that time, the driving factors were an accelerating surge in capital inflows and a sudden policy shift by RBI (generally believed to have been dictated by the finance ministry) in favour of non-intervention in the currency market.

This time, too, similar factors are at work. After the post-Lehman collapse of capital inflows in 2008-09, there has been a healthy rebound in 2009-10. In both the second and the third quarters of 2009-10, net inflows outweighed the current account deficit.

And the same pattern may have persisted in the fourth quarter.

Furthermore, RBI appears to have adopted a largely non-interventionist stance towards the currency market since last summer. Part of its reluctance to intervene in order to contain rupee appreciation may be attributed to its preoccupation with managing the record borrowing programme of the government in 2009-10, which, in turn, may have constrained its ability to undertake sterilisation of foreign currency purchases.

Whatever the reason, the fact of substantial currency appreciation over the past half year is indubitable and worrisome against the background of a sizable current account deficit. Such appreciation also hurts industry, agriculture and traded services, and is particularly damaging to the recovery prospects for employment-intensive, manufactured exports such as garments, textiles, leather products and gems, which took a beating in the global recession.

The non-interventionist approach to currency management makes little sense at a time when China is stubbornly persisting with its dollar peg despite huge current account surpluses.

Indeed, as my old friend and former colleague Y V Reddy, former RBI Governor, has astutely observed, what seems to be happening is that the US dollar is depreciating (in real terms) and so, in lock-step, is the Chinese renminbi, against all other currencies.

That includes the euro, the yen and other Asian currencies, including, of course, the rupee. That means, as net exports (exports minus imports) from the US and China increase smartly, the burden of absorbing this increment in net exports falls on the rest of the world.

Yet that trend is likely to continue as long as net capital inflows are robust and RBI refrains from active intervention. (Unless, of course, there are large increases in international oil prices, which would not only widen the current account deficit but might discourage some capital inflows).

So, the appropriate policy choices are reasonably clear. Either RBI has to intervene in the currency market and sterilise excess liquidity or, if necessary, there has to be some moderation in capital inflows (that's the 'capital account management' which the RBI Governor has endorsed in his speeches).

Some amount of currency intervention can be conducted without sterilisation, since the resulting increase in RBI's net foreign assets can be consistent with reserve money growth targets.

Beyond that level, sterilisation of currency purchases is necessary and entails either open market sales of government bonds or a resurrection of the market stabilisation scheme (MSS) or an increase in the cash reserve ratio (CRR). All of these options will be challenging to pursue in the context of a large government borrowing programme and high inflation.

The alternative course of action is to moderate net capital inflows. There are various instrumentalities, including tightening of P-Note regulations, reduction of external commercial borrowing limits and adoption of a Brazil-type tax on capital inflows other than foreign direct investment and external assistance.

None of these options is neat and clean. But some combination of sterilised currency intervention and capital account management may be unavoidable to prevent further rupee appreciation. Indeed, it may be desirable to roll back some of the hefty real appreciation that has already occurred.

The author is honorary professor at ICRIER and former chief economic adviser to the Government of India. Views expressed are personal.