How small exporters can get better profits

RBI and Sebi should modify the structure of the currency futures market to permit settlement by delivery of dollars ONLY from an EEFC account, says Jamal Mecklai. 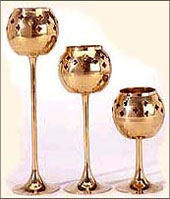 Most of them usually simply convert their inward remittances at spot, paying a spread of at least 50 paise over the inter-bank rate, particularly in the smaller cities and towns.

In some cases, they may be using their Exchange Earners' Foreign Currency (EEFC) accounts, but I would imagine that cash flow being crucial in most small companies, they mostly opt for conversion at whatever rate they can get.

Again, very few of these companies know very much about hedging and, in any case, most would not have forward limits in place. Thus, they not only get hit with the risk that the currency may move unfavourably, but also end up paying a significant charge at the bank interface.

This doubtless renders them less competitive and, in many cases, brings them under constant threat of collapse.

The currency futures market, if properly reconfigured, could address at least one of these critical business problems.

Consider a small handicrafts exporter from Moradabad. Say, he has a $30,000 export order, which he has concluded when the dollar/rupee is at 46. After packing and shipment, he expects to receive the payment in a month.

Say, further, that he understands how to use futures markets and has the capability of managing the cash flow risk; so, he sells his dollars in the futures market at, say, 46.25. Assume the rupee starts to strengthen after this and rises to 45 at the maturity of the contract.

Since the current structure of the market doesn't permit delivery, he squares off his contract (at 45 rupees) at settlement, and collects Rs 37,500 (46.25 minus 45.00 = 1.25 mark-to-market gain per dollar) from his margin account.

In parallel, he sells his dollars to his bank, but here, since he is a small player with little or no leverage, he has to settle for the card rate, which is, say, 44.25 per dollar.

Thus, his final realisation is 45.50 (44.25 for his spot sale to the bank plus 1.25 on his futures hedge) -- not only lower than his hedged price but also than the rate that prevailed when he concluded the export order.

This is the hard reality.

To alleviate this problem, the Reserve Bank of India and the Securities and Exchange Board of India should modify the structure of the currency futures market to permit settlement by delivery of dollars ONLY from an EEFC account.

Then, rather than squaring off his futures contract, our friend in Moradabad would simply settle the contract by delivering his EEFC dollars to the clearing house. The clearing house would give him 45 rupees per dollar (less perhaps 1 or 2 paise to cover its own costs); adding his 1.25 gain on the futures hedge, he would end up with 46.23 or 46.24, a rate almost exactly at his hedged rate.

If use of currency in EEFC accounts were expanded to include settlement of futures contracts, and the receipt of dollars by the clearing house were recognised as a current account transaction, the clearing house would simply have to sell the delivered dollars in the market, without any further regulatory ado.

Given that the clearing house would be a large, well-capitalised company, it would not pay more than ¼ or ½ paise as transaction spread when it sold dollars to the bankers.

In effect, this model would enable the small exporter to leverage the credit quality and market access of a large organisation, enabling him to realise much better value for his exports.

Domestic currency futures were doubtless permitted to fulfil the needs of the small exporter community. While the regulators have never come out and said it this clearly, I can't imagine any other reason for allowing this instrument.

So, while the initiative was well-founded, and while the start-up has been successful insofar as the market has been reasonably liquid, to my mind the currency futures market has not yet addressed a real need. The modification suggested here is, in my view, a necessary condition for making this market more relevant.

Of course, a lot more would have to be done in terms of educating small exporters in the nuances of risk management and in effective utilisation of their EEFC accounts.

Perhaps intermediaries could be permitted, although we would have to guard against price gouging there as well. In any event, the regulators should, at least, take the first step and permit settlement of currency futures contracts by delivery from EEFC accounts.

Related News: EEFC, Securities and Exchange Board of India, Reserve Bank of India, ONLY, Jamal Mecklai
Print this article