Stock market caught in a pincer

By Business Standard
January 29, 2010 10:38 IST
If RBI doesn't respond quite as harshly as analysts expect, ditto China, there could be a sharp rebound in equity values, says Business Standard. 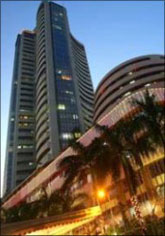 The old saw, 'Buy on rumour and sell on news', alludes to the stock market's tendency to anticipate events. Investors are driven by earnings expectations, rather than historic records. This is why equity cycles lead the real economy.

For example, the Nifty hits its historic high in January 2008, two quarters before the economy lost momentum. It started recovery in March 2009, a quarter or so before the economic cycle bottomed. This lead effect is true for the broader financial economy.

The stock market correction, which has knocked 10 per cent off index values in 2010, is explicable only in the above context since the real cycle is picking up.

However, this is 'news' anticipated by investors, who collectively pushed the Nifty up over 70 per cent between March 2009 and December 2009. Some have now booked profits obeying another dictum, "Nobody ever went broke taking a profit".

Interest rate futures and T-bill yields have already hardened in anticipation. Rate-sensitives such as banks, NBFCs, development financial institutions and real estate have been hammered at the bourses.

Beyond the rupee's domain, the Chinese have started taking steps to prevent over-heating. China's realty values rose 60 per cent in the past 12 months. The Shanghai Composite Index is at an average PE ratio of 30+ (India's Nifty PE is at 20).

China has raised domestic interest rates. It may modify its mercantilist policy and hike the Yuan's peg against the US dollar to prevent unabated investment inflows and consequent asset inflation.

The alternatives of either a bubbly China, or a potentially stronger yuan, are both frightening to portfolio investors. Some are migrating to safe, hard-currency assets, including the hardest currency of all, bullion.

A deeper correction in Indian equities would not be a bad thing from the perspective of the long-term investor. The current PE of 20 offers some safety margin, if growth is not quite up to expectations. A Nifty PE of 15 would be positively attractive.

There could be some negative impact on the divestment programme, but the economic recovery remains strong. There is also the chance that the market has over-reacted. If RBI doesn't respond quite as harshly as analysts expect, ditto China, there could be a sharp rebound in equity values. That would be a case of 'sell on rumour, buy on news'.