The licence permit raj has morphed into a system which is just as crippling, A V Rajwade.

The recent debate over the freedom of financial regulators from netas and babus needs to be looked at in the context of the remarkable immunity from accountability that the latter enjoy - even from the media. 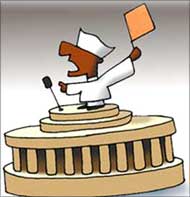 Take, for instance, accountability of the bureaucrats whose actions, or inactions, surely contributed to the Bhopal tragedy - these would include the factory inspectors; those supposed to be monitoring hazardous chemicals business and ensuring that safety regulations were rigidly followed, to prevent such terrible tragedies; those who allowed the land surrounding the factory, which was supposed to remain vacant, to be occupied illegally, etc. Were they there only to take haftas?

Contrast this with the sharp criticism of the politicians, the distrust of the profit motive of big business, particularly multinationals, which is so amply evident in the media commentary.

It is amazing to see this distrust in a country whose majority belongs to perhaps the only major religion in the world that worships Laxmi, the wealth Goddess. The economy was liberalised in 1991; our mindsets, however, are perhaps still to liberalised!

The "satisfaction" over Keshub Mahindra getting a jail sentence is in sharp contrast to the way the chairmen of the Railway Board and Air India escape any demands for punishment after the accidents, despite their being executive chairmen unlike Mahindra.

Quite often, there is no accountability for the public sector, even less so for the netas and babus who control it - just look at the mess in BSNL, MTNL, Air India; much of it is directly due to the control exercised by the netas and babus.

And yet, for decades, we continued to place our faith in the netas and babus to manage a highly complex organism like the economy. The result was: The "Hindu" rate of growth! It is sad that even highly educated and otherwise brilliant people like Jairam Ramesh, who are from a different generation, have the same touching faith in the bureaucracy and public services.

Recently, Ramesh said that helipads in Mumbai were fine if owned by the public sector but, on environmental grounds, he would not permit helipads owned by private entities - obviously, the former are somehow less polluting than the latter.

This view is on a par with his statement about the Bt Brinjal controversy: He refused to allow the seed because the tests had not been done in a government-owned research centre! (What a contrast with the way US President Barack Obama publicly stated recently that it did not make sense for the government to take over the management of the oil spill in the Mexican gulf, as BP had better experts.)

Clearly, Ramesh seems to have no faith in the honesty and technical knowledge of the 95 per cent or more of us outside the public sector, without guaranteed government jobs or pensions. Incidentally, with regard to the environmental impact of the new Mumbai Airport about which Ramesh is so concerned, has anybody calculated the pollution effect of, say, 50 aircraft circling over Mumbai for six-eight hours a day - obviously not the same aircraft - because they do not get landing slots for an indefinite period? But, for environmentalists, the status quo is always benign; they do not mind giving up the "better" in pursuit of the "ideal".

Since the economy was liberalised and "independent" regulators were appointed for different industries, the netas-and-babus octopus has not only made sure that the posts are occupied by retired bureaucrats, and the bureaucratic culture is maintained, but it has also ensured that their independence remains only on paper - recall the supposedly independent telecom and petroleum regulators, the Lokpals and many others.

Also, the netas and babus combining with big business is even more dangerous. The reappearance of the old Press Note 1 on FDI is a classic example of the way the netas and babus articulate policy - this ghost has been dug up to haunt foreign investors  within a couple of months of the introduction of a comprehensive policy which was supposed to remain unchanged for six months.

And, the complexity and delays in governance seem to be growing instead of getting streamlined, partly because of the compulsions of coalition politics which necessitates the formation of new ministries to satisfy the aspirations for ministerial posts.

And the paralysis in the Cabinet system is amply manifested in the appointment of one group of ministers after another to handle tricky issues. Good old Parkinson had so accurately diagnosed decades ago what happened when committees grew too large!

I propose to return to the issue of regulator autonomy for the oldest and most powerful public institution and regulator, namely the central bank, next week.

Tailpiece: A report in The Economic Times (July 3) says that "the department of public enterprises is considering a proposal to reduce the period of audit pendency for public sector undertakings (PSUs) to seven years". Any comment on this is superfluous.