Is the exit of the capital markets joint secretary the reason behind this, wonders A K Bhattacharya. 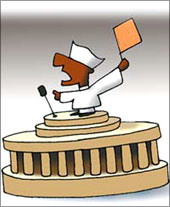 The last fortnight has seen a new face of India's financial sector regulators. All of a sudden, all of them look like tigers.

No longer do they appear subservient to all the wishes of the finance minister or the ministry mandarins. They now appear bold enough to make public their candid views and even opposition to the ordinance the finance ministry had got issued on June 18.

For those, who may not have kept track of recent developments in India's financial sector, the ordinance last month added a new regulatory structure by setting up a joint committee to resolve inter-regulatory disputes like the one that erupted over who should regulate unit-linked insurance schemes (Ulips) -- the Securities and Exchange Board of India (Sebi) or the Insurance Regulatory and Development Authority (Irda).

The significance of the move also lay in the fact that the committee was to be headed by none else than the finance minister himself.

So, what made the financial sector regulators bold? To get a sense of what could have brought about this change and what the various ramifications of the new attitude could be, it is important to place the developments of the last fortnight in the larger context of the equations between North Block, headquarters of the finance ministry, and the various financial sector regulators.

The reality is that in spite of the functional autonomy the financial sector regulators enjoy at least on paper, most of them are also acutely conscious of their jurisdictional and functional limitations on two counts.

First, the government has the power to appoint the heads of the regulatory bodies. Indeed, this power has seen its blatant manifestation in the manner in which the government has been regularly appointing several senior and even retired officers belonging to the Indian Administrative Service (IAS) to head these bodies over the last several years.

It is not that IAS officers are not competent or are not suitable for the job. The preference for IAS officers is significant because it reinforces the widely held belief that the government uses its power quite well and the bureaucracy that runs the government enjoys the benefits of that power.

Secondly, all the financial sector regulators like the Reserve Bank of India, Sebi and Irda are set up under separate laws approved by Parliament. All these laws have one specific provision that empowers the government to have the final say in the affairs of these regulators in case there is any dispute.

Thus, in any case, under the law, the financial sector regulators have to run to the finance ministry to get its concurrence on any disputed issue.

But who else were equally responsible for what happened? Sebi and Irda were engaged in a public spat over Ulips, creating uncertainty for investors and the markets.

If the regulators were so concerned over the finance minister's interference, why didn't they settle the dispute bilaterally? Or why didn't they refer the matter to the High-Level Coordination Committee on financial markets?

Remember that regulators rarely voice their discomfort over any issue when the target of attack may turn out to be the finance ministry. So, when the finance minister mooted the idea of a financial stability and development council, market experts and economists cried foul, but the Reserve Bank of India's reaction was muted.

However, this time when the ordinance on the joint committee was promulgated, all the regulators began voicing their opposition.

What happened? One of the explanations doing the rounds in North Block suggests that the capital markets division in the finance ministry functioning without a regular joint secretary in charge for the last few weeks may be one of the reasons for the sudden outburst of reactions from the regulators.

As long as the capital markets division had a joint secretary-level official liaising with the regulators on these issues, there was not much one heard about how uncomfortable they felt about the government moves.

Now that the division is without an in-charge at that level, the regulators have regained their voice.

It is difficult to believe this story, but many officials in North Block do not disagree with such an assessment. If this is indeed how it all happened, it is a sad commentary on India's regulators in the financial sector and the state of their autonomy.