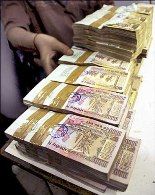 It is very well admitted that the economic crisis witnessed in the aftermath of the Lehman episode is the worst since the Great Depression of 1929. Since 2007, global output has contracted by 0.6 per cent and the decline in advanced economies has been as much as 3.2 per cent.

Though the world economy has moved into a positive growth territory, thanks to large stimulus packages, fears of a double-dip recession remain. Though some countries, particularly the emerging market economies, have shown a faster revival, market sentiment in most advanced economies continues to be pessimistic.

There were considerable variations in the size as well as the composition of stimulus packages depending upon the intensity of the crisis, prevailing economic environment and the scope available for providing the stimulus.

The consequence of these large stimulus packages has been to sharply increase their deficits and debt. The gross debt-to-GDP ratio of the G20 economies increased from 61.3 per cent in 2007 to 76.8 per cent in 2010.

It is close to or more than 10 per cent in the US, the UK, Spain and Japan. These have brought to the fore the fiscal sustainability question.

Surely, most economies have shown definite signs of a turnaround and with growing concern about fiscal sustainability, governments and central banks need to work out strategies to unwind the stimulus.

However, a simultaneous withdrawal of the stimulus, particularly by the advanced countries, could cause a double-dip recession and, therefore, the withdrawal has to be calibrated carefully.

The countries where the revival has been faster, those with high debt-to-GDP ratios, and those with a looming threat of inflation, should initiate the process faster than the countries that are still vulnerable with private sector revival yet to take firm roots.

A coordinated stimulus withdrawal requires both internal and international rebalancing. Internal rebalancing is necessary to ensure that the withdrawal does not result in a decline in the overall demand. It is also necessary to adopt a strategy that employs a combination of tax increases and spending cuts.

Credible commitment to cut expenditures is important. International rebalancing is even more daunting, for even as the developed countries start initiating their exit, others will have to fill the space and offsetting demand decline from advanced countries is most difficult.

Prospects of persuading countries like China to increase their consumption to offset the US demand shortfall, for example, do not look very bright. Furthermore, increased external imbalance has persuaded many developed countries to resort to protectionist policy in one form or another, and China continues with a "mercantilist"-type exchange rate policy.

Among the emerging market economies, India is the right candidate for initiating the exit from expansionary fiscal and accommodating monetary policies. The Indian economy has revived to record an estimated 7.4 per cent growth in 2009-10 and in the current financial year, it is estimated at 8.5 per cent.

Interestingly, India embarked on fiscal expansion much before the global financial crisis and this has helped the economy land softly during the crisis. The plan for large increases in public expenditures for pay revision, loan waiver and food and fertiliser subsidies was put forth in February 2008, much before the Lehman episode unfolded in September 2008. Besides, large election-related spending also resulted in a stimulus.

Exiting from the stimulus to phase out large volume of deficits and debt is, however, painful and Indian policy makers will have to evolve an exit strategy that maintains high growth with price stability.

India's consolidated fiscal deficit in 2010-11 is estimated at about 8 per cent which, although lower than the 10.2 per cent recorded in the previous year, is much larger than any other emerging market economy.

India's debt-to-GDP ratio is also very high at about 80 per cent and though an overwhelming proportion of this is internal, it is a cause for worry.

The exit strategy will have to take into account these ground realities and will have to proceed on the lines indicated by the fiscal consolidation path laid down by the Finance Commission.

This would require that the debt-to-GDP ratio is brought down to 68 per cent by 2014-15 and fiscal deficit is compressed to about 5 per cent. This implies that it is necessary to phase out/target subsidies on the lines indicated in the Economic Survey.

On the tax side, the implementation of Direct Taxes Code (DTC) may not bring in large gains in the short term and it appears both DTC and Goods and Services Tax (GST) will be implemented only from April 2012.

Nevertheless, the success of the exit strategy crucially hinges on a significant increase in the buoyancy in tax revenues.

It was the successful application of the Tax Information Network that helped augment tax ratio by almost 3 percentage points since 2003-04, and the success of GST implementation will crucially depend on the adoption of technology in ensuring accurate and swift credit, clearance of inter-state transactions and refunds (zero-rating of exports).

Hopefully, both the Centre and states will ensure this.

The author is director, National Institute of Public Finance and Policy. The views are personal.

FinMin seeks views of all parties on GST Bill