More flyovers of no help to public transport users: Reddy 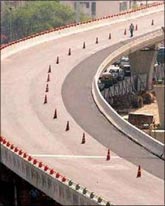 Building of more flyovers in cities were only aiding the personal car-owners, Urban Development Minister Jaipal Reddy on Monday said and maintained that the focus should be on expanding the new-age public transport systems like Metro and BRT.

"We are building flyovers (in cities) for cars only. Even buses can't go. The two-wheelers cannot use them," he told a national conference on 'good governance towards improved basic urban  service' organised by TERI in New Delhi.

He said the focus should be on urban public transport and that there is a need for expansion of metro rail in Delhi and other cities of the country.

Reddy said apart from metro rail, the ministry was looking at bus-based public transport and highlighted the importance of the bus rapid transport (BRT) in which exclusive lanes are reserved for the buses. He said this was cheaper than the Metro and the people have also liked it.

The minister said that 15,250 low-floor semi-luxury buses have been introduced in 62 cities under the JNNURM.

"That is the only way to convince the aspiring urban middle classes to give up personal cars and go for public transport," Reddy said adding that this will help save fuel, reduce traffic jams and pollution.

Noting that this will lead to better living in urban areas, Reddy said that more than 90 per cent of the funds under JNNURM, which is over Rs 1 lakh crore (Rs 1 trillion), has gone on improving basic services like drinking water, drainage, slum improvement and housing for the poor.

Reddy said that "we are living in an urban age but our own urbanisation was 33 per cent" while the global average is 50 per cent. The government was prepared to meet the challenge of urbanisation, he said.

He lamented that the urban local bodies, which have been left to the state governments by the Constitution, have been victims of 'benign neglect'.

"As a consequence, no elections were held, some even for 20 years and no powers were enjoyed by the urban local bodies," he added. Reddy said that with the 74th amendment to the constitution, an attempt was made to see that elections are held regularly and the ULBs enjoy powers.

But he said despite the constitutional amendment, more needs to be done as the state governments were reluctant to part with their powers. Referring to the success of JNNURM, which completes four years next month, the urban development minister said an attempt has been made to not only give finances but also to motivate the state governments to give more powers to the ULBs.

He said the funds of the JNNURM have been exhausted and he was elated at the success of the project.

Reddy also underlined the need for a culture of levying user charges in the municipal areas and pointed out that this was not being done in most of the places.

"Take for example, drinking water. It is hardly charged anywhere. It requires money to provide water to the houses," he added.