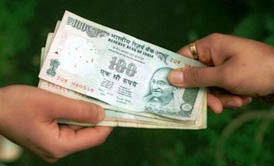 The Centre's fiscal deficit more than doubled to Rs 2.45 lakh crore (Rs 2.45 trillion) in the first seven months of 2009-10, as a fall out of stimulus packages given to perk up the economy.

However, with gross domestic product likely to increase with a suprisingly high growth rate of 7.9 per cent recorded in the second quarter, there is more room to contain the fiscal deficit within the targeted level.

The fiscal deficit had already crossed over 87 per cent of the targeted amount for entire 2008-09.

This was so, because the government was expecting fiscal deficit of just 2.5 per cent of GDP at this point of time last time.

When excise duty was cut by six per cent and service tax by two per cent from December onwards and plan expenditure rose as part of stimulus package, the government revised its target to 6 per cent of GDP, which later turned out to be 6.2 per cent.

The rise in fiscal deficit could be gauged from the fact that tax revenues decreased by around eight per cent to 2.13 lakh crore (Rs 2.13 trillion) till October this fiscal against Rs 2.32 lakh crore (Rs 2.32 trillion) a year ago.

The Centre's revenue deficit, which is a gap between revenue receipts over revenue expenditure like salaries, rose by 138 per cent to stand at Rs 20.76 lakh crore (Rs 20.76 trillion) during April-October, 2009.

Source: PTI© Copyright 2021 PTI. All rights reserved. Republication or redistribution of PTI content, including by framing or similar means, is expressly prohibited without the prior written consent.
Related News: GDP
Print this article