News
Business
Movies
Sports
Cricket
Get Ahead
Money Tips
Shopping
Sign in  |  Create a Rediffmail account
Rediff.com  » Business » Why the G20 Summit in Pittsburgh is a step forward

Why the G20 Summit in Pittsburgh is a step forward 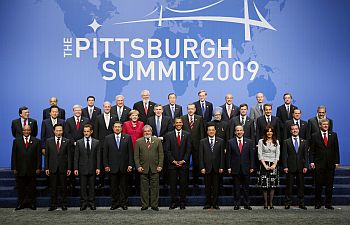 The visit of Prime Minister Manmohan Singh to the United States worked.

On conclusion of his short trip to Pittsburgh to attend the G-20 Summit, he was in upbeat mood.

His admirer and director of G-20 research group of Toronto University John Kirton told rediff.com that amongst the 19 leaders of G-20, only Dr Singh is truly qualified to talk about the complex world of international finance because he has doctorate degree in economics and has practised his knowledge throughout his life.

He said that British Prime Minister Gordon Brown is only partly qualified because he was finance minister before becoming PM; but Brown was a student of history in his college days.

PM Singh's personal qualifications and India's thriving democracy continue to give it an edge at international summits that are dealing with the world of economy. In spite of India's dismal contribution in international trade, which is little above 1 percent, India sits confidently on high table.

Was G-20 at Pittsburgh a success?

It was certainly a step forward for developing countries. The bottom-line of such high-level international summits can be termed successful if rich people yield even little space to developing or poor countries. In real world, developed, rich and powerful countries are controlling leverages of the finance sector while the leaders of the developing countries, who are struggling with poverty, inflation and money for infrastructure but still growing impressively, are trying to make these Western countries realize that they can no more dictate the world -- because their growths are stagnating, their dependence on developing world is increasing and it is becoming irreversible.

Following points of the statement released by the G-20 leaders suggests why the summit at Pittsburgh was a way forward and positive for India and other developing countries.

The statement said G-20 countries will "make sure our regulatory system for banks and other financial firms reins in the excesses that led to the crisis. Where reckless behaviour and a lack of responsibility led to crisis, we will not allow a return to banking as usual."

This means that millions of dollars of hefty pay packages and salary-linked performance which breeds greed amongst bankers and financers will come under scrutiny.

G-20 leaders also said, "We designated the G-20 to be the premier forum for our international economic cooperation. We established the Financial Stability Board to include major emerging economies and welcome its efforts to coordinate and monitor progress in strengthening financial regulation."

PM Singh in his press conference also emphasised this resolve to G-20 as an achievement.

PM Singh on this issue said, "We have agreed that the G-20 will henceforth be the premier forum for international economic issues. This is an important development broadening the global governance structure."

Another big shift came in rich nations' behaviour, when G-20 leaders said, " We are committed to a shift in International Monetary Fund quota share to dynamic emerging markets and developing countries of at least 5 percent from over-represented countries to under-represented countries using the current quota formula as the basis to work from. Today we have delivered on our promise to contribute over $500 billion to a renewed and expanded IMF New Arrangements to Borrow."

PM Singh in his interaction with mediapersons also pointed out, "Agreement on 5 percent shift was a compromise. Developing countries had asked for 7 percent." Nevertheless this shift means that China, India and other countries would get voting rights in functioning of IMF.

Another major signal that has emerged from the G-20 is that the IMF and World bank has got attention, more focus and more funds, specific role and their focus is again directed to the real issues of poor nations.

The statement resolved that, "We stressed the importance of adopting a dynamic formula at the World Bank which primarily reflects countries' evolving economic weight and the World Bank's development mission, and that generates an increase of at least 3 percent of voting power for developing and transition countries, to the benefit of under-represented countries. While recognizing that over-represented countries will make a contribution, it will be important to protect the voting power of the smallest poor countries. We called on the World Bank to play a leading role in responding to problems whose nature requires globally coordinated action, such as climate change and food security, and agreed that the World Bank and the regional development banks should have sufficient resources to address these challenges and fulfill their mandates."

G-20 has decided to take steps to increase access to food, fuel and finance among the world's poorest while clamping down on illicit outflows. Steps to reduce the development gap can be a potent driver of global growth.

Another big issue that cropped up at Pittsburgh is about food security and concrete action to help poor face climate change.

It said, " Over four billion people remain undereducated, ill-equipped with capital and technology, and insufficiently integrated into the global economy. We need to work together to make the policy and institutional changes needed to accelerate the convergence of living standards and productivity in developing and emerging economies to the levels of the advanced economies. To start, we call on the World Bank to develop a new trust fund to support the new Food Security Initiative for low-income countries announced last summer. We will increase, on a voluntary basis, funding for programs to bring clean affordable energy to the poorest, such as the Scaling Up Renewable Energy Program."

But India is unlikely to agree to one issue that came up at the G-20 summit. No Indian government can afford to withdraw subsidy on kerosene. G-20 recommended, "To phase out and rationalize over the medium term inefficient fossil fuel subsidies while providing targeted support for the poorest. Inefficient fossil fuel subsidies encourage wasteful consumption, reduce our energy security, impede investment in clean energy sources and undermine efforts to deal with the threat of climate change."

G-20 wants government to withdraw subsidy on one hand and give cash directly to poor to buy clean energy.

Another issue of Indian interest was about protectionism.

G-20 leaders said, "We will fight protectionism. We are committed to bringing the Doha Round to a successful conclusion in 2010."

PM Singh mentioned this issue to media and said that, " I think things could be worse in regards to protectionism. There is evidence of creeping protectionism it has not reached an alarming point. And therefore, it is necessary to bring international pressure to restrain and restrict the growth of protectionism."

G-20 has also sent political message to spare no effort to reach agreement in Copenhagen through the United Nations Framework Convention on Climate Change negotiations. However, again, on this issue India is not on same page with most of the developed countries including USA.

PM Singh refused to predict outcome of Copenhagen saying, "I am not an astrologer.."

Image: The leaders of the G20 Summit pose for a group photo in Pittsburgh, USA on Friday