The government has written to market regulator SEBI saying Cairn Energy Plc's deal to sell majority stake in its Indian arm to Vedanta Resources does not yet have its approval, a condition contingent for the $8.48 billion deal to consummate. 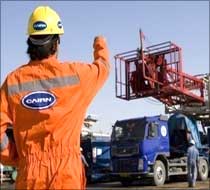 The Oil Ministry has also written to Cairn Energy asking the Edinburgh-based firm to make formal applications for approval of transfer of ownership in each of the 10 properties where Cairn India holds an interest through a complex maze of 31 subsidiaries, none of whom are incorporated in India.

Sources in know said the Oil Ministry wrote to the Securities and Exchange Board of India soon after Cairn Energy Plc CEO Bill Gammell's August 26 letter that painted a "rosy picture" of its transaction to sell up to 51 per cent in Cairn India to London-listed Vedanta but stopped short of saying that the deal was contingent upon government approval.

The letter to SEBI asserts Government's right to vet a change of ownership of a company operating fields like the giant Mangala oilfield in Rajasthan, which is at the centre of Cairn Energy's deal with Vedanta. It further asserts that the deal will have to comply with regulations under Production Sharing Contracts for the 10 properties which make government or partner state-owned ONGC approval prerequisite for any stake sale, sources said.

When contacted, Oil Secretary S Sundareshan said the government will consider Cairn's stake sale as and when they apply for approval. He declined comments on letter to SEBI.

The ministry made no suggestions to SEBI on how it should proceed on Vedanta's open offer for acquisition of a further 20 per cent from minority shareholders of Cairn India.

As per Vedanta's offer document, September 7 was the last date for any company to make a counter offer to minority shareholders of Cairn India, they said adding SEBI was yet to approve of the open offer.

Sources said SEBI may ask for further details of the deal and may direct Vedanta to make more disclosures so that an investor can make an informed decision when the open offer opens on October 11.

JM Financial, the sole manager of the offer on behalf of THL Aluminum Ltd and Vedanta Resources Plc, along with Sesa Goa, being a person acting in concert, may be asked to make additional disclosures as part of the public announcement. Sources said Cairn has so far stated that its deal with Vedanta was a corporate transaction involving only share transfer and there would be no change in status of Cairn India which will continue to operate as an independent firm.

But the ministry was concerned about Vedanta's lack of experience in highly skill based oil exploration business and wants to scrutinise how the new management would operate complex reservoirs like the Rajasthan fields.