Jairam Ramesh, Minister of State for Environment and Forests, says that India will go to Copenhagen Meet on Climate Change with a positive frame of mind and will be flexible.

In the first part of this interview, Ramesh had spoken about how India can be prosperous without being polluting. In this the second and concluding part of an interview with rediff.com, Jairam Ramesh discusses issues related to the Copenhagen Climate Change Conference, which will be kicked off on December 7, and on what should India's stance be with regard to curbs on carbon emissions. Excerpts:

You have been saying that the Kyoto Protocol is non-negotiable. Right?

We should have 'common but differentiated' historic responsibility. These issues are non-negotiable.

I have never at any point of time said anything else. It was mischievous reporting by one newspaper of my letter. It was just an idea. I have advocated this distinction between developed and developing countries responsibilities as suggested in Kyoto Protocol.

I have never advocated India taking on internationally legally binding targets. All I have been advocating is that let us see the issue independently of Copenhagen. We must have an aggressive, pro-active domestic strategy. And then negotiate from position of strengthen.

Today, we are negotiating from a relatively defensive position. 'We are not doing this', 'we won't do this. . .' that's not correct thing to do. I would like India to be aggressive. As the Chinese have recognized, we can emerge as the leader in the field.

There is no reason why Indian companies could not be the world leaders in solar and nuclear technology, and in clean coal technology. further. . . Do you see any possibility of a deal in Denmark?

I think intrinsically there is a consensus that there won't be any treaty in Denmark (the interview was conducted in mid-November). There will be some sort of a political statement.

As of now, my feedback is that we will not have legally binding comprehensive climate change treaty. There are too many loose ends. I think the inability of Americans to deliver is also an issue. They are unable to deliver meaningful reduction targets by 2020.

I think that's one very important reason for not having any big deal in Copenhagen. What we will have is the statement of political ambition, a kind of political vision. I think political leaders will give a mandate for future negotiations.

But that's not enough.

I agree that ultimately it's all about people and livelihood-security. I have been going to villages. I have been to Himalayas and the North-East. I have gone to coastal communities. Let me tell you, the public is aware of these issues. People know why rains come like this and why floods are so horrific. 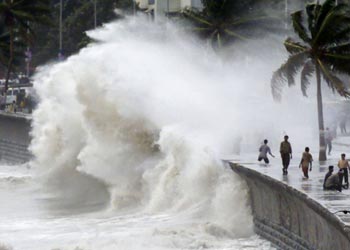 Some experts think that your ministry is blindly approving Clean Development Mechanism project. (CDM is an arrangement under the Kyoto Protocol where rich countries can invest in projects in developing countries that are able to reduce carbon emissions). You haven't been rejecting many. Are these projects genuine?

We have approved 1,400 projects under CDM. If all of them are implemented then by 2012 we will get $6 billon worth of FDI (foreign direct investment).

About 9 per cent to 10 per cent of India's greenhouse gases will be neutralised through these CDMs.

It is wrong to say that CDMs are not benefiting. It is advantageous to the country. What you are doubting is whether it is benefiting local communities.

It's too early to say. There are some CDMs in forestry that would benefit the communities as well. Before people, the country should benefit. I don't draw distinction between country and people as media and NGOS draw. Country's benefit is people's benefit.

My job is not to find fault. My job is to support the new ventures. We have asked some of them to redo their proposals.

All over the world the refrain is that only China and India have benefited. It is called China Development Mechanism! PointCross, a Washington-based think-tank, has ranked India as number one in implementation of CDMs. Image: Protesters reflected in balloons as they demonstrate against CO2 emissions in Kiev.
Photographs: Gleb Garanich/Reuters

If you are sticking to the 'common but differentiated' responsibility of rich nations as explained in Kyoto Protocol, then why are you not applying same the principle within India? Why poor suffer more on issue of carbon reduction?

I agree. We need to address issue of domestic inequality. But we should not use poor or poverty as an excuse.

It's a ridiculous situation where 40 per cent of India doesn't have reliable electricity. It's important to have equality within India, but it has nothing to do with Copenhagen.

Why can't rich Indians be asked to pay more than the poor?

Answer to domestic inequality is not to ask people to consume less but to ensure that those who are not consuming should end up consuming more.

We will have to increase the size of the cake by having growth. People also suspect the figures of levels of emission in India.

We have done a fairly good job. Since last 15 years I am following this debate. I don't think India can be faulted on methodology. We have done a series of surveys on it.

We have launched the Indian Network for Comprehensive Climate Change Assessment. It will provide inventory of greenhouse gas emissions. Our numbers can't be questioned.

At the level of community what are you doing?

We have to worry about the Himalayan ecosystem. What will happen to the glaciers, the water supply and the deforestation in upper catchment areas?

We have done surveys about livelihood insecurity in the Himalayan areas.

We are looking into eco-tourism in ecologically fragile areas of India.

We are sensitized. We have sensitized chief ministers of Himalayan states. We are getting the State Action Plan on Climate Change ready. The Delhi government has already done it.

Your National Action plan reads fine but what about implementation?

We are always weak in implementation. We are trying to bring results. Please wait. The national action plan was released just last year and implementation is just picking up. Why are you not talking about consumption pattern of the West, one of the main culprits?

I agree. It is often said that developed countries' emissions are lifestyle emissions.

It is true that the consumption pattern of the West has led to this crisis of  global warming.

For example, eating beef is the important cause of global warming. The driving of SUVs, the manner in which we use electricity, and in the profligate ways we use natural resources are causing troubles. These are issues embedded in lifestyle. . . that's why Americans are finding it very difficult to come to the negotiating table.

Climate change requires lots of sacrifice on the part of the developed countries in terms of their lifestyle.

What kind of targets you will give to people?

We will not have emission targets, but performance targets. We will introduce fuel efficiency standard by year 2012. We will keep 30 per cent of India under forest and green cover by 2030. We will decrease energy intensity by some per cent by 2020.

Don't you think as a developing country we should ask developed countries for compensation because due to global warming floods and rains have increased? We are the victims of their lifestyle.

We should keep asking. We can spend a lot of time in finger-pointing, but frankly we are not going to anywhere. Many small island nations and developing countries think that your statement gives the impression that the primary responsibility of climate change is not of the developed countries.

There is historical evidence in front of you, but we have to move on because countries like India, Bangladesh or Maldives are more vulnerable than Denmark or America.

We are saying that countries like America and Denmark are responsible for global warming, but in whose interest is the agreement on climate change needed? For a country like India!

We need to understand that we need the agreement quickly, but we have to keep in mind that we don't give away on basic principles.

Domestically, we need a sense of urgency. We have to move faster on solar, clean coal and other energy avenues. That is the crux.

We need scientific networks to monitor our sensitive areas. Copenhagen will take care of itself. What we need is an aggressive agenda at home and scientific agenda to measure, monitor and moderate impact of climate change.

Some people doubt that in your climate change strategy some kind of quid pro quo may creep in vis-a-vis US? Your letter suggesting that India may get UNSC seat, etc raises doubts. . .

The fact of the matter is that climate change is an important issue with a larger development impact. It is also a strategic issue. For us, India's interest is paramount. Nothing else matters.