Sign in  |  Create a Rediffmail account
Rediff.com  » Business » Interview with Jairam Ramesh, Minister of State for Environment and Forests

Interview with Jairam Ramesh, Minister of State for Environment and Forests 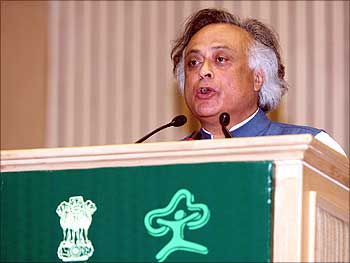 It appears as if every time Jairam Ramesh, Minister of State for Environment and Forests, opens his mouth, controversy tumbles out.

It is unfair that it should happen to a man who is a brilliant analyst of economic issues, has deep understanding of the trends of the modern world, and has written extensively before he became a loyal Congressman.

He also enhanced his reputation giving inputs for Congress president Sonia Gandhi's speeches. He is also considered to be close to Congress general secretary Rahul Gandhi.

Jairam, not really known to be a seasoned and wily politician in the Congress mould, was a part of the core group of Congress party and an influential member of its 'war room' from where the battle of 2009 election was planned, executed and won.

Net-savvy Jairam is an avid reader, and personifies the modern, urban and liberal Indian mind.

In an exclusive interview with rediff.com, Jairam Ramesh discusses issues related to the Copenhagen Climate Change Conference which will be kicked off on December 7. He also talks about all there is to know about India's official position on the hottest issue on the planet this season: climate change. Exceprts:

The Copenhagen summit is just a few days away. Many people will ask you if the domestic legislation is a substitute to meet the global requirements of mitigation of carbon emission to counter climate change?

What my idea is that we should be held accountable domestically. Ultimately, in a democracy like ours, Parliament is supreme.

Before we take on any international commitment we should demonstrate to our people that we are serious. We have National Action Plan on Climate Change. We have 11th Five Year Plan document and next year we will start preparation for 12th Five Year Plan. 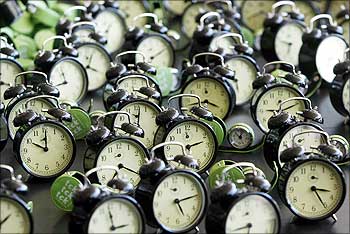 My proposal is that as a demonstration of our seriousness and in order to take accountability of our actions let us think in terms of domestic legislation as we have the Fiscal Responsibility in the Budget Management Act.

Let us think of legislation through Parliament, build domestic consensus on series of mitigation outcomes. In India, we have a lot of action but we are weak in outcomes. So, take concrete mitigation action in transport, in energy, in industry, agriculture, forests, in buildings.

Give quantitative targets which we should fulfill by year 2020. Build the domestic consensus through Parliament. I am a great believer in parliamentary democracy. It will be legally binding domestically. 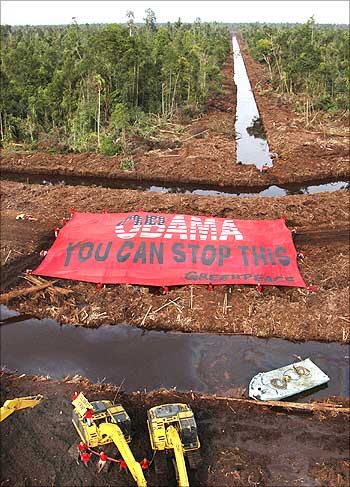 You do have National Action Plan.

No, that is the executive action. This is my thinking (domestic legislation) and not the government's policy. My feeling is that we will be able to put pressure on ourselves to deliver domestically towards mitigation of carbon emissions.

We don't have to take on obligations internationally because there is no question of taking on legally-binding targets for reduction of carbon emissions.

That is non-negotiable for us.

From day one I am saying that there is simply no question of India taking on legally-binding emission reduction targets for the time being. . .  'time being" could continue for couple of years.

If need be, go for domestic legislation. 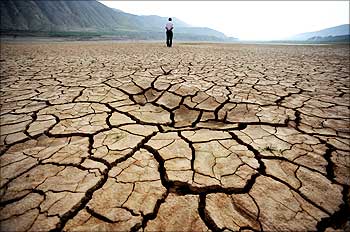 But will the people in Copenhagen listen to you?

We have taken into account parliamentary accountability which is supreme in our system. We cannot take Parliament for a ride.

When the government announces targets and we don't meet them, the government has to go to Parliament and explain why it is not happening. I am strengthening the parliamentary institution.

One of the criticisms has been that our Parliament has no role in international agreements.

In Copenhagen, what will you take to the negotiating table?

We have the National Action Plan on Climate Change. We are bringing in our seriousness to translate our action plan into specific outcomes. We will bring to the table our prime minister's commitment that India's per capita emission will never exceed the per capita emission of the developed countries.

In other words, if the developed countries reduce their emissions faster then it will act as the outer limit for us. That is a huge thing we have taken up on ourselves. It is voluntary action. 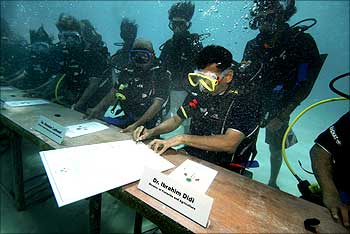 We have said that we are ready to reflect our commitment of having 'per capita emission lower than the developed countries' in some form of international agreement. We will consider that.

We have said that we can reflect in international agreements India's mitigation outcomes. But the fact of the matter is that neither under the UN Framework Convention on Climate Change nor under Bali Action Plan 2007, is India obligated to take legally binding reduction targets.

But that is not the way the debate has progressed.

What is 'binding' to India?

We are 'binding' ourselves domestically. If need be we can bind ourselves on per capita emission (which will be lower than developed countries).

To say that India will cut its emissions by x per cent by 2020 or 2030 is simply not possible. It is simply not there because we are not obligated.

It's not what negotiations on climate change are all about. 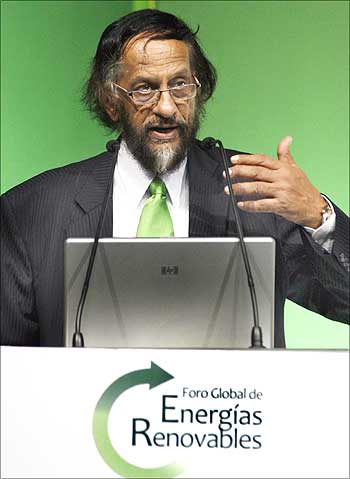 Image: Rajendra K Pachauri, Nobel laureate and chairman of the Intergovernmental Panel on Climate Change, addresses the audience during a conference on renewable energy in Leon, Mexico.
Photographs: Mario Armas/Reuters

This is India's stand because India is not developed, right?

We are a developing country. For us climate change has the developmental dimensions as well. We have a huge requirement to add to our power capacity. Almost 25 to 30 per cent greenhouse emissions are from our power sector. We don't want any artificial constraints to be put on our development activity.

I also do not believe that growth is equal to development or prosperity is equal to pollution. We must break that link somewhere.

India must develop a leadership role to demonstrate to the world that we can be prosperous without polluting. We can develop it in an alternative paradigm.

The world may not be interested in what you do domestically. Isn't it?

In fact, the idea struck me when I was in China meeting my counterpart.

Are India and China on same page on issue of climate change?

We are on same page and yet we are not. I'll tell you why.

After China, America, the European Union and Russia, stands India.

China emits four-and-a-half times more carbon than India. We are not on the same page as far as emission levels are concerned. The rate of growth is also higher in China. India's growth rate is steady. China's rate of growth is spectacular. 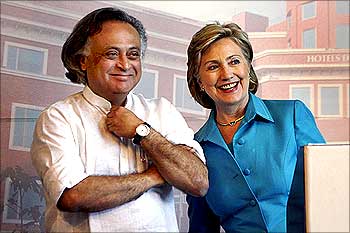 Still India and China are negotiating from the same platform. Both of us say that developing countries require space to grow. We should not use climate change treaty as artificial barriers to our growth plans.

On October 21, India and China signed a memorandum of understanding on partnership in the area of climate change. So, we are on the same page on the negotiation table. There not many disagreements.

But still there must be gray areas. . .

Let me say this: China is pursuing the green strategy more aggressively than India.

I think from ten years from now Chinese companies will be selling us solar technology, green technology and clean coal technology. I think the Chinese have decided that this is the future as far as business is concerned. We have to wake up to this.

What are you doing about it?

I can't do it alone. It has to be a collective response.

But I can tell you the speed and aggression with which China is embracing green technology in field of bio-mass, clean coal and solar sector is absolutely breathtaking.

Today Japan is the world leader in green technology. I would not be surprised if Chinese companies dominate in green growth technologies soon.

This is an opportunity for us. We have the leadership potential. We have to clean up our minds. There are too many cobwebs in our mind! Click MORE to go on further.