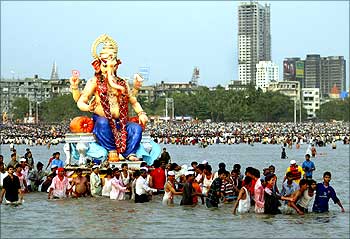 Image: Devotees carry a statue of elephant headed god Ganesh for its immersion into the Arabian Sea in Mumbai.
Photographs: Punit Paranjpe/Reuters

Mumbai -- the financial capital of the country and home to the Reserve Bank of India, the Bombay Stock Exchange and the National Stock Exchange of India, and many major corporations -- ranks 34th in the list of most powerful cities in the world, according to a survey by citymayors.com.

The city which never sleeps and is known for its fast paced lifestyle is the hottest business hub in India. The city has grown a lot in terms of infrastructure in the past few years. Highways and roads in particular undergo a constant makeover as the city prepares to accommodate a growing population and growing number of vehicles each day.

Mumbai, which also houses the biggest entertainment industry in the world, scores 166 points in the list of the world's most powerful cities.

The research, which was carried out in Japan for The Global Power Index 2009, assessed 35 cities from across the world based on six criteria: Economy, research and development, livability, accessibility, cultural interaction as well as ecology and natural environment.

Mumbai is the only Indian city in the list, that includes Beijing, Taipei, Los Angeles, Sydney, Seoul, et cetera.

Let us take a look at the world's 10 most powerful cities... 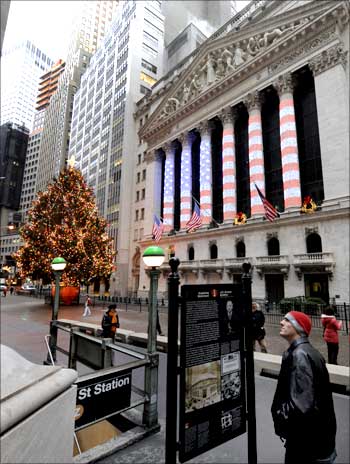 Image: A tourist reads a historical marker outside the New York Stock Exchange shortly after the exchange opened for business on the last day of 2008.
Photographs: Ray Stubblebine/Reuters
New York City ranks 1st and scores 330 points.

NYC is the financial center of the United States and the prime location for leading financial companies.

It houses the New York Stock Exchange, which is by far the largest stock exchange in the world by market capitalisation of listed companies.

New York mainly owes its growth to the financial, insurance, and real estate sectors, while it is also dominant in sectors such as mass media, fashion, art and advertising. 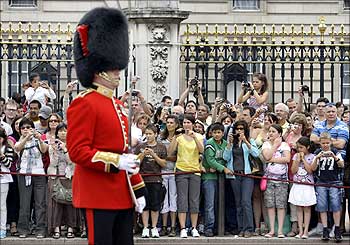 Image: Tourists take pictures of the Changing of the Guard Ceremony at Buckingham Palace in central London.
Photographs: Stefan Wermuth/Reuters

London is known as the world's largest financial center and houses more than half of FTSE 100 companies and over 100 of Europe's 500 largest companies.

It is home to the London Stock Exchange, Bank of England and Lloyds of London insurance market.

It is a hub for media companies and a booming tourist destination. 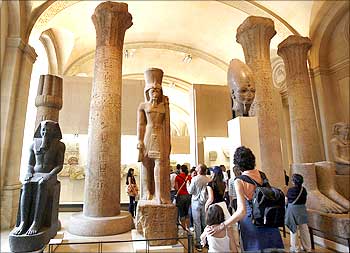 Image: Visitors walk in the Egyptian gallery of the Louvre Museum in Paris.
Photographs: Regis Duvignau/Reuters

The capital of France is a popular tourist destination and the servicing sector is a major contributor to the city's economic growth.

The Parisian economy is extremely diverse, with about half of its growth coming from business and financial services.

It hosts many international organisations like UNESCO, the Organisation for Economic Co-operation and Development, the International Chamber of Commerce and the informal Paris Club. 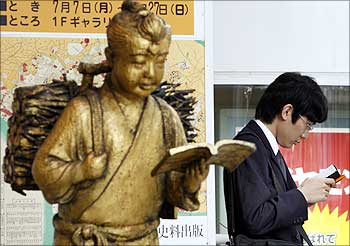 Image: A man reads a book next to a statue in front of a book store in Tokyo.
Photographs: Kim Kyung Hoon/Reuters

The city is a hub for steel plants, textiles and luxury goods. The manufacturing sector is the most developed here and Tokyo accounts for a major chunk of Japan's economic growth.

The city is the headquarters of some of the world's largest investment banks and insurance companies. 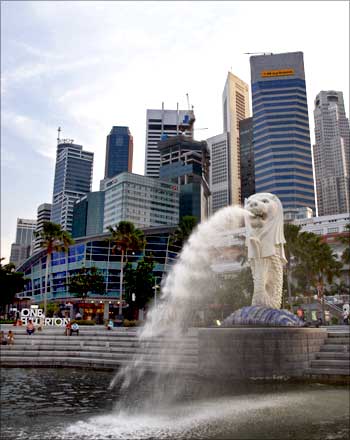 Image: People sit on the steps near the Merlion, in Singapore's financial district.
Photographs: Alywin Chew/Reuters

Singapore is rapidly positioning itself as a major financial and high-tech centre, competing with other Asian cities and marking its presence in the fast globalising world.

Exports are the country's main source of revenue and allow it to purchase natural resources which it does not have in ample quantity.

Singapore is a multination hub as its largely corruption-free government, skilled labour and advanced infrastructure have attracted massive investments from foreign firms.

Manufacturing, particularly electronics, and financial business services are the most developed sectors of the economy, while it is also pushing itself in the biotechnology sector. 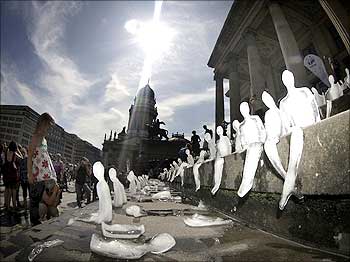 Image: Ice sculptures in the shape of humans are placed on the steps of the music hall in Gendarmenmarkt public square in Berlin.
Photographs: Tobias Schwarz/Reuters

Berlin relies heavily on economic activity in the services sector, while small- and medium-sized companies are also key to the city's growth.

Some of the fast-growing sectors in Berlin are communications, life sciences, information and communication technologies, media, advertising, biotechnology and environmental services, transportation and medical engineering. 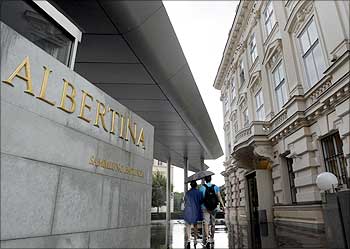 Tourism generates impressive revenue for Vienna and a majority of the population works in the services sector.

Small and medium businesses are predominant in Vienna, which Austria's biggest economic centre.

The city being the capital of Austria houses many national administrative agencies, universities, schools and embassies.

Vienna is also home to international organisations and agencies. The International Atomic Energy Agency, the United Nations Industrial Development Organization and other international associations are located in Vienna. 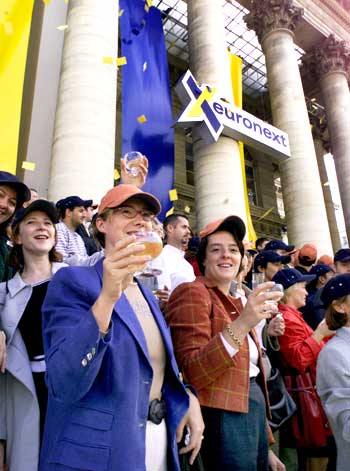 Image: Traders raise a toast on the steps of the Paris bourse to celebrate the Euronext, merging Paris, Amsterdam and Brussels exchanges.
Photographs: Jack Dabaghian/Reuters

Several big Dutch institutions such as ABN AMRO, Akzo Nobel are headquartered in Amsterdam and some of the world's top 500 companies, including Philips and ING are based there too.

The oldest stock exchange of the world -- The Amsterdam Stock Exchange -- is situated near Dam Square in the city's center.

Amsterdam is the financial and business capital of the Netherlands. It is also one of the most popular tourist destinations of Europe. 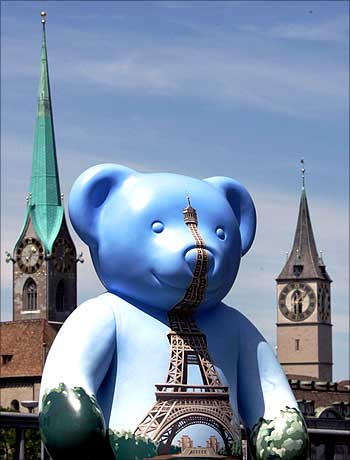 Image: A teddy bear with a painted Eiffel tower on its chest stands in front of the Fraumuenster church (L) and the St. Peter church on the Quai bridge in Zurich.
Photographs: Sebastian Derungs/Reuters

Zurich is the financial and commercial and economic centre of Switzerland. The city is home to leading financial institutions like Credit Suisse, Swiss Re, UBS, and many other banking giants.

While banking and insurance sectors are moving at a fast pace in Zurich, the traditional machine industries also have a concrete base in this city. Also, most of the research and development centers are concentrated in Zurich.

The low rate of tax in Zurich attracts overseas companies to set up their offices there, and large corporations like Google, Microsoft, ABB, General Motors Europe and IBM have their offices in the city.

The Swiss Stock Exchange is also situated in the Zurich. 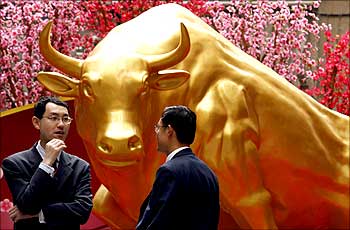 Image: Office workers chat in front of a decoration for the Year of the Ox at Hong Kong's financial Central district.
Photographs: Bobby Yip/Reuters

Hong Kong is a global center for trade and the government here plays a very passive role in the financial industry, mostly leaving the direction of the economy to market movements and the private sector.

The country has a high concentration of international corporate headquarters, and the Hong Kong Stock Exchange is one of the largest stock markets in the world.

Hong Kong had established extensive trade and investment ties with China, while the United States and Japan are also its largest export markets.