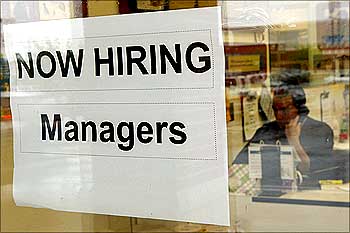 Image: A hiring sign hangs in a window in Virginia.
Photographs: Kevin Lamarque/Reuters

There could have been no worse start to a year than 2009 for the job market, but as the days passed by, hope sprouted from the ashes of millions of jobs killed during the recession.

With the financial crisis ebbing, the pace of vanishing employment has come down in recent months as against an average of a whopping 9,000 job losses daily in the beginning of this year.

The nomenclatures for giving pink slips took different names with a few calling it just layoffs and terminations, while many others stuck to descriptions like right sizing and voluntary separation packages.

Moreover, cost saving measures and slump in demand were cited as the reasons by companies for resorting to laying off employees.

Cut to the present, reviving economies are slowly reversing the trend of job cuts.

Better growth numbers especially from the developed nations like the United States and Japan, seem to have helped in improving the sentiment in the employment market. For instance, after hovering at a 26-year-high of 10.2 per cent, the American jobless rate slipped to 10 per cent in November.

Reflecting the improving sentiment in India, the International Labour Organisation (ILO) has reported that as many as five lakh jobs were created in the third quarter following the government's stimulus measures.

Easing credit conditions have helped companies to come up with new investment plans, which in turn would create more employment opportunities. 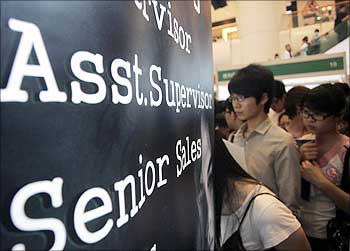 Image: Job seekers wait in line at a job fair, in which 3,700 jobs vacancies are offered, in Hong Kong.
Photographs: STR New/Reuters

Striking a positive note on the labour market, an official from recruiting firm TeamLease Services said there would be increased hiring in the coming months especially in sectors like healthcare, pharmaceuticals and communications.

"Hiring would be quite intense at the top-- leadership roles are going to be hired for, although the numbers are not an indicator.Frontline, sales and customer facing roles are another area where sizeable hiring is expected," TeamLease's Vice- President (Sourcing) A R Rajesh said.

Thanks to the extensive government expenditure to boost their respective economies, thousands of jobs have been created.

In the US, the country worst hit by the turmoil, not only did the rate of job cuts fell but also sectors such as healthcare managed to generate new jobs.

Still, the optimism from different quarters is guarded, with international agencies cautioning that premature withdrawal of stimulus could result in increased employment losses.

In its recent report, the ILO cautioned that five million more jobs could vanish if stimulus plans are withdrawn. 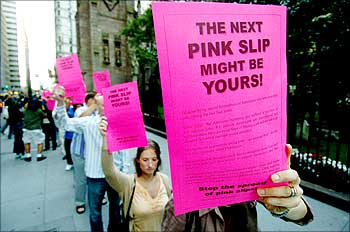 Japan, the world's second largest economy, has bore the brunt of the deteriorating labour market. Majority of the country's electronic and auto giants stepped in to slash their headcount, that too in tens of thousands.

Leaving behind those gloomy days, the national economy is slowly growing after exiting recession in the second quarter. Outside Japan, this year saw over 30,000 jobs washed away by the troubles at US car maker General Motors, which has come out of bankruptcy as a leaner entity.

The Organisation for Economic Cooperation and Development (OECD) region-- a group of 30 nations including the UK, Germany and France-- continues to grapple with jobless rate of over eight per cent.

Since the raging financial crisis rocked the global economy in October 2008, estimates indicate that a staggering 20 million jobs have evaporated.

Right from financial services to technology to auto to telecom, pink slips flew thick and fast in most of the sectors. Starting off the year on a jittery note, firms spanning across continents, primarily Japanese electronic entities, announced thousands of layoffs. 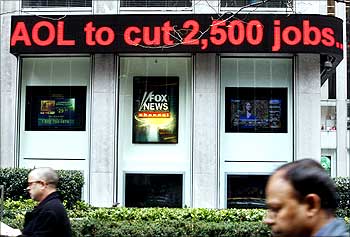 Mirroring the intensity of its financial troubles, American banking behemoth Citigroup trimmed its headcount by nearly 30,000 in the second quarter of this year.